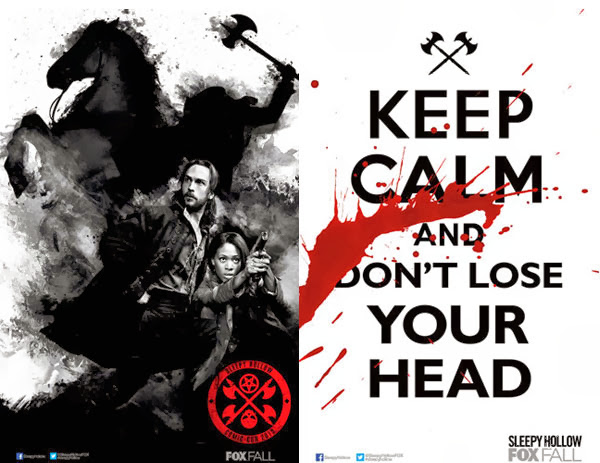 Ichabod is finally in clothing appropriate to the time and is not impressed that Abby has pushed him into a pair of skinny jeans. Abbey snarks that Maloch might not recognize him in his new duds.  Crane starts to talk about the fear that Maloch instilled in him and Abbey sends him off to try on more clothing. Crane appears back in his old clothing and Abbey tells him that he needs to learn about dry cleaning.

Irvin is watching an interview with the people from the park about the incident in which his daughter was threatened. Frank asserts that the man acted like he was just sleeping walking but believes the suspect did threaten his daughter.  The woman from the park appears in the station looking for Irving and she touches a cop and passes off the evil spirit.  Frank gets a call from someone who tells him that if he doesn't hand over the Washington bible, his family will be taken.  Frank looks around the station and sees the officer who was touched by the woman from the park. Frank attacks the officer but the evil is passed on before he can get to the cop.  Frank gets on the phone with a priest and talks about his fear for Macy.  The priest instructs Frank to take his family somewhere safe and promises to meet him.

Frank goes to see Abbie and Crane about Washington's bible. Crane reveals that Katrina said that the bible contains the answers to defeating evil.  Abbie admits that they haven't found anything out of the ordinary.  Frank says that he has to protect his daughter and asks Abbie and Crane to help him take evil down.  Frank leaves to take his family to a safe house.

Abbie researches and finds information about a woman who encountered a demon, who could jump from body to body.  Abbie puts in a tape where Corbin talks about the woman being possessed and his attempt to free her. When the woman lifts her head, it turns out that it is Jenny.

Abbie and Crane confront Jenny, who says that she doesn't remember any of it and has never seen the tape. Abbie asserts that they need to watch it to see how Corbin took down the demon because they believe the demon is back.  Jenny suggests that they hand over the bible but Crane says that the bible must be critical.  Jenny assents and Abbie turns the tape back on.

The demon in Jenny is not impressed when Corbin waves a crucifix in front of it.  The demon tells Corbin that he will die at the hands of the horseman of death and that he will kill Abbie.  Jenny rushes forward and turns off the tape.  Abbie and Jenny bicker about the fact that Jenny didn't confide in Abbey.  They talk more about how Corbin took care of the demon and Jenny starts to leave until Abbie reminds Jenny that Macy is only 13.  Jenny pauses, apologizes and leaves.

Macy, Jones, Frank, and Morales  arrive at a cabin.  What Frank does not know is that Morales is now carrying the demon. Frank tells Jones that he needs his A game, as Morales watches.  Cynthia gets out of the car and asks how serious this situation is. Frank says that he cannot share the details right now and orders Morales to check the perimeter.

Jenny is still sitting in the car when Crane finds her.  Crane acknowledges how difficult this is for Jenny but reminds her that the demon will come for Macy soon.  Jenny starts to talk about her time being possessed and how it was assumed that she was just another troubled kids.  Apparently, even after the demon was gone, Jenny still had thoughts about Abbie, so she deliberately had herself arrested to avoid harming Abbor.  We get a flash from the tape with the demon saying that Jenny has been chosen and that she has been marked.  Crane again asserts that they need Jenny's help.


The priest has covered the doorway in salt and says a prayer by the door.  Jones and Morales watch from a distance and talk about the limited help a priest would have to offer.  Morales approaches the door but stops short of entering.  Morales tells Jones that salt is to stop demons from crossing the threshold and talks Jones into moving the salt.  The minute Jones moves the salt, Morales breaks his neck and enters the cabin.

In the cabin, Frank looks at surveillance video as his family looks on. Macy leaves her parents to study in her room and Morales stands outside the door.  Frank heads to the porch and Cynthia questions him about someone being after their daughter.  Cynthia assures Frank that Macy didn't get hurt because he wasn't there and that they are both tired of being treated like they are broken.  Frank's phone rings and Cynthia heads back inside.

Morales opens Macy's door, as Frank listens to Abbie talking about getting the lamp.  Frank gets a call from Morales, who says that sundown is upon them and that he has failed.  Frank heads into the cabin and finds Morales passed out, Cynthia locked up, and Macy possessed by the demon.

Abbie, Crane and Jenny head to see the group she knows who have the lantern.  Jenny's plan is to steal the lantern but Abbey does not want her sister to go to jail and instead plans to steal it herself.

Macy is still floating from the ceiling, when she is confronted by the priest. The priest throws holy water and Macy falls to the ground.  Macy starts to transform but the priest continues to hold out the crucifix.  Demon Macy kills the priest and demands that Frank hand over the bible, when Frank  starts to beg for Macy's life.  Cynthia comes rushing out thinking her daughter is in danger and she is grabbed by the demon, who again demands the bible.

Frank calls Abbie and tells them that he has to give the bible to the demon.  Abbie begs Frank not to do this and hangs up.  Jenny wonders why Frank would say where he is going and Abbie suggests that this is his way of telling them that he wants them to stop this. They realize that Macy must have been possessed.

Abbie and Crane have arrived at the compound and Jenny talks them through from a distance  Abbie and Crane make it into the shed and the signal cut out.  Crane reveals that all of the crimes Jenny committed was to make sure she had no way to get to Abbie.  Crane and Abbie work together to grab the lantern but when they leave the shed, they are surrounded by armed men.  Abbie says that she is a cop but they are not impressed by her trespassing and taking their property. Abbie argues that a child's life is at stake but the men are not moved.  Crane says that the war between good and evil has resumed in Sleepy Hollow and adds that they can win the war now, if they are allowed to leave with the lantern.  Jenny ends up behind the men armed and promises to bring the lantern back when they are done with it.  The men finally acquiesce and they leave.

Frank has taken the demon to the working area and realizes that the bible is gone.  The demon tells Frank that he cost Macy her legs.  Cynthia asks what is going on and asks where Macy is.  Frank tells Macy to fight because he knows she is still in there.  He finally admits that Macy does not need fixing because she is strong like Cynthia.  Macy surfaces momentarily and the demon grabs Cynthia, saying that the Macy is never coming back.

Jenny walks in and faces the demon. The demon taunts Jenny about her desire to kill Abbie. The demon again demands that the bible be turned over and promises to take over Jenny again.  Abbie calls the demon a coward and asks why it doesn't prey on her.  Crane quickly surrounds the demon in salt and uses the lantern against it. In a huge lighting show, the demon disappears leaving Macy in the circle of salt. Frank and Cynthia rush forward and comfort their daughter. Abbie walks over to Jenny and embraces her as Crane looks on.

Abbie removes the bible from the hiding spot and Abbie questions if Frank would have handed over the bible if he had found it.  Frank never had the chance because Crane hid it knowing that a parent would go to incredible lengths to protect their child.  Crane mixes a potion to make invisible ink glow, to see if there are messages in the bible.  Abbie turns off the light, as Crane rubs the potion on the bible.  The potion reveals the date December 18th, 1799 in Washington's handwriting.  It's interesting because this was done four days after Washington was supposed to have died.

I will say however that it was good to see Macy again.  We rarely get good portrayals of disabled people. I particularly enjoyed the continual assertion that Macy is not broken because that is commonly how disabled people are seen.

The bickering that once kept me amused at the beginning of the show, is now so easy to gloss over.  If anything, Sleepy Hollow has become dull and repetitive.