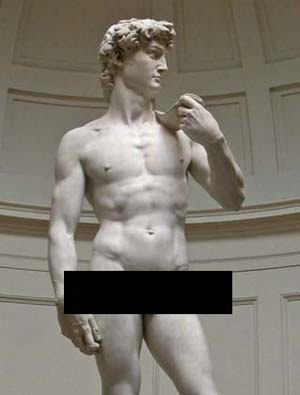 The majority of the programs which fall within our genre show air cable (especially Starz and HBO, where it’s practically obligatory to show some breasts at some point) we are seeing more and more nudity in shows.
Nudity is a complex issue to tackle, because there are many times when nudity is essential to the story, adds impact to the story and weight to the characters, their actions and the overall sense of development, place and world. Nudity can add a depth and a realism that keeping the characters dressed would forever detract from. And sometimes it’s there because the writers think they’ll get more viewers if they regularly splash mammaries across the screen.


And, inevitably, it’s conventionally attractive women who are getting naked the most. Perhaps most blatantly, it’s women who are getting naked for no damn reason at all - not even a flimsy excuse of plot, world building or character development to justify it. The breasts are there entirely for eye candy aimed at straight, male viewers. Game of Thrones is a master of this - with wall to wall prostitutes, women have lesbian sex in the background while Littlefinger expositions, Bron being interrupted in bed with a naked woman (he fully clothed), the Lannister soldiers and Bron preparing for battle - with naked women. Daenerys being naked when... actually Daenerys being constantly naked several times a season and it’s rarely  justified by the plot or a case of character development. Naked women are the wallpaper of Game of Thrones. But it’s not alone. The first time we see Vanessa on Da Vinci’s Demons she has her breasts out. Just because, perhaps to set the tone of the show - behold, boobies.


Inevitably, this wallpaper nudity is nearly always female in nature - random, storyless, characterless nudity is something for conventionally attractive women.


Of course there are times when we do expect our characters to be naked - and it actually looks odd when they aren’t. During intimate heterosexual sex scenes we can expect both participants to get naked. But even here, we’re still seeing vast discrepancies between men and women.


Again Game of Thrones is a severe culprit here. Many sex scenes begin with female nudity - but then are interrupted before they can begin, or we move on to a different scene before the men can strip off - Pod with prostitutes, Tyrion with prostitutes, Osha seducing Theon, Mellisandre and Stannis. Sometimes this “prequel” with naked women and fully clothed men can go on so long as to suggest the man is actually managing to have sex completely through his trousers - naked Ygritte with a fully clothed (and fur lined!) Jon Snow, Mellisandre and Gendry - over and over the women are not only naked, but the camera is careful to show every inch of their bodies while the men may as well still be wearing armour in contrast. And we have to note that Mellisandre’s mystical powers constantly require her to get naked and have sex, but Thoros of Myr can resurrect Lord Berric 6 times without dropping trousers once. Even when we have male nudity, it is not only limited in how much is shown in comparison to women - but it is often much briefer. A prime example is Robb and Talisa in bed in the camp - he gets out of bed, shows his backside, then quickly puts on a robe. Talisa rolls around on the bed naked.


Of course, while Game of Thrones is a prime culprit, it’s hardly alone. We have seen every inch of Lucrezia Donatti in Da Vinci’s Demons, but both Lorenzo and Leonardo have managed to have sex with her keeping everything covered. Sometimes it’s the barely lowered trousers, sometimes Lorenzo keeps his shirt on, sometimes, it’s careful camera angles and sexual positions. Regardless, Lucrezia is on full display, Leonardo and Lorenzo are carefully covered. And the pattern continues with Vanessa and Guiliano.
This trope is so extreme that even in shows that can’t or won’t show nudity (beyond, perhaps, side-boob) we still see - through naked backs usually - naked women with nearly completely clothed men: in Revolution we have a naked Nora and a fully clothed Miles and Wolf Lake opens with a half-clothed John being ridden by a naked Ruby.


In addition to the simple disparity of nude depictions, we also see a major distinction between the reasons for nudity.
After all, not all nudity is sexual and there are several of our shows where people are naked in a way that has nothing to do with sex. Jaime Lannister, staggering, filthy towards his bath in Game of Thrones is not being depicted sexually. The hallucinating and distressed nun, smeared in dirt on Da Vinci’s Demons, The Prisoner is not a sexual depiction. Even Sam and Luna running naked after shapeshifting in True Blood are not sexual depictions.


These non-sexualised depictions of nudity are, in many ways, far more realistic and less gratuitous than the constantly posed sexual nudity. They’re usually appropriate for the plot, communicate powerful messages about the way people have to live or the tortured emotions they’re feeling or to otherwise reveal their character beyond a simple “behold a sexy woman, let her pose for you”.


But, unfortunately, they also add to the gender disparity of nudity - because being naked in non-sexual depictions is one of the few occasions when men can strip off and let it all hang out. Never is this more clear than in Da Vinci’s Demons. There, the person most likely to get naked is Lucrezia, who has done so repeatedly. She’s a perfect depiction of conventional beauty standards and is constantly posed in a sexual manner - usually before, during or after sex.While she doesn’t get her kit off quite so often, Vanessa is also stripped down to show how beautiful she is, how sexy she is and is usually stripped in circumstances meant to draw attention to this.


No man in Da Vinci’s Demons has been stripped down the same way - the sex scenes have been largely depicted as mentioned above. But there has been male nudity - the Pope, the Duke of Milan and the Duke of Urbino have all presented that rarest of depictions - full frontal male nudity.


But the difference is glaring. The Pope is not flashing his danglies so we can appreciate his body - and the actor is not conventionally attractive. He is naked in his bath, molesting young men and having them murdered and receiving - and assaulting and half drowning - visitors in his bath to show his arrogance. He doesn’t care if he is naked, or about the regard of underlings - his nudity is on par with him hitting Riario or having the young man killed. Why is he naked? Because he’s the Pope and so powerful he doesn’t give a damn what people think or what people see- whether that’s him stark naked or drowning one of his advisors in his bath. His nudity is a declaration of his power and his arrogance.
The Duke of Milan, naked with a young man in bed, is also not conventionally attractive or remotely sexual. Throughout his morning activities and grumping to his servant, we’re meant to feel disgust, repugnance for this debauched, disrespectful, self-indulgent man (and it speaks volumes of the show that that’s twice men having sex with men is used to depict repugnance). Even the Duke of Urbino running around naked is meant to show what a repulsive man he is - if we had any doubt he shit in a corner to drive the point home. Another naked, not conventionally attractive man, capering naked to repulse us.


In True Blood, Game of Thrones and Da Vinci’s Demons, we definitely see more men naked for incidental reasons than sexual reasons - which contrasts sharply with the women. When Lucrezia, Vanessa, Sookie, Tara, Mellisandre, Daenerys, Roz, et al are naked we are expected to see them in a sexual fashion. A naked woman is nearly always sexual - it’s exceptional when they are not.


Obviously our sexist censorship laws do present a problem with depicting full frontal male nudity in a sexual situation, simply because you can’t show an erection on screen. Yet, even when we have non-full frontal sexual nudity, it is still limited, the camera lingers on the women, men are unlikely to display more than a brief showing of backside - if that. And even when we do get presentations of male nudity, overall we are not generally invited by the posing, context or camera to sexualise the man’s body. Similarly, when we do sexualise male bodies, it is often limited to torso or, at most, backside. The limits of censorship cannot be considered a barrier here - even within these legal limitations, there are many occasions when seuxlaaised full male nudity could be depicted, equal to the female nudity, and not require an erect penis: Drogo getting into bed with Daenerys, Robb getting out of bed with Talisa, Pod being enticed into bed by multiple prostitutes - just a few of innumerable examples from Game of Thrones. But there are more, Lorenzo or Leo having post sex talks with Lucrezia in Da Vinci’s Demons, Bill or Eric in bed post-sex with Sookie in True Blood. The censorship laws are a hurdle, but not a barrier or an excuse.


We’re not against nudity in shows, far from it - but we want it reasonable, we want it sensible, we want it justified. And when it happens, it should be balanced - no naked women and fully clothed men cavorting together pretending to have sex.