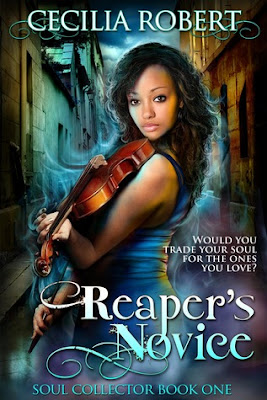 Ana had hopes and dreams – long term she wanted to finish school and become a musician. Short term, she wants to hold her family together, to bring peace to her constantly warring parents

That is, until her parents and siblings were all killed in a car accident, leaving Ana to make a desperate deal with Death to ensure her family had any future at all.

She is now bound as Death’s Novice, learning how to collect souls to pass on and seeing it encroach onto her own dreams. There’s a lot to learn and get used to – but, more than that, there’s apparently agendas that go even further than the complexities of being a reaper. A whole species may rest on her and everything she thought was true about herself may be just one long fiction.

And that’s a secret that is spilling out into the lives of her closest and dearest friends who are going through turmoils of their own.

I really don’t Ana, and it’s always a problem when I dislike a protagonist. There’s so much about her motivations I don’t get. She starts out reasonably enough, trying to hold her family, trying to save her family, rejoicing in them being saved – and then it all derails. She comes very quickly to resent and fear Ernest without the gratitude you’d expect (or even the suspicion you’d expect). Far more frustratingly, she is completely and utterly devoid of curiosity.

She’s just had her eyes opened to the supernatural world, she collects souls in a variety of colours, she is surrounded by beasts and beings of legend and mythology and she asks no questions. Even basic ones – Ernest tells her that a red soul is the sign of a vibrant, well lived life. Surely anyone, anyone at all, faced with that revelation would naturally ask what the other soul colours mean? But we never find out, we never learn.

Her lack of curiosity is being frustrating because it adds to make her character seem hopelessly passive. Everything that happens in her life, the life of her friends, whatever dramas surround her, whatever plots surround her, all the supernatural machinations – she just goes along with it. She barely questions, she rarely challenges she’s hardly ever pro-active and when she is it’s on odd ways that scream of Spunky agency: she goes to the Shadow Realm where she has been told repeatedly not to go despite having people who are far better trained and capable than she. She sneaks into the library to find answers – fine – but she hasn’t asked any questions! At this point, for all she knows she just has to ask Ernest for answers or even free access to the library and she wouldn’t have to go sneaking. She is constantly mushroomed (kept in the dark and fed shit) and she doesn’t question it. A whole range of characters tell her that she’s involved in something big and important that they just can’t tell her about – but at no time in the story does anyone reveal why it’s such a big secret, even when she tarts learning the answers we still don’t know why she couldn’t have been told all of this right at the beginning of the book! She is constantly asked to trust people she has no reason to trust and she does. A character even demands she gives up her life’s dream of going to the Conservatory and because he says so she does! That’s it! He says she should so she does. He says he can’t tell her why and she accepts it! This passivity becomes even more aggravating and problematic as the powers that be cause her boyfriend to become more and more aggressive, random and dangerous – even aggressive and threatening violence towards her and she is constantly forgiving. I could take her accepting Reiner’s demand for forgiveness after what he did. But the two together becomes even more unpalatable

On the few occasions when she is given information she never asks follow up questions. In one instance she even rejects answers and refuses to listen because she just can’t take the information.

Her lack of curiosity combines with an extremely long pre-amble and a whole lot of “mundane” storylines with her friends and her life that the story is horribly slow to get into and the supernatural elements of the world are really shallow until the very end of the book. At no point is anything truly developed in any kind of decent depth, we only get the most shallowest information about this whole other species of humanoids apparently in the midst of a civil war. We have no indication what they are, what they do, what they’re involved in or even the greater issues of the war. We have no idea how anything works, no idea what all the random creatures are or why – or anything else. Even with the supernatural being introduced very early in the book, it’s just there. Ana goes on with her mundane life, worries about her friends and occasionally has a brief soul collecting hiatus, before returning to her mundane life again. Supernatural party – back to mundane life. Strangle little clue with the teachers arguing aaaaaand back to mundane life again. Again, I can’t stress this enough, there’s just so little development and exploration of the supernatural world presented.

We do have several POC, including Ana herself, who is Black and it’s completely free of usual stereotypes and tropes – albeit also free of any real indication of cultural difference. But I’m not sure if any of the characters show the culture of Vienna.

This book is set in Vienna, which is a unique setting in the genre and, in many ways gets it right. There is clearly a lot of research into Vienna, locations, places, etc and the characters do occasionally drop into German and the characters have appropriate names. It’s just… occasionally it goes too far. Like every time someone is going for a walk by the Danube or sit by the Danube or looking over the Danube – every time they use the name of the river. There’s no “I’m going down by the river” as you would expect from the natives of the city – it’s the Danube every time. It feels a little forced at times.

I am bemused by Siegfried apparently being a Viking, a berserker no less, at about 150 years old. I didn’t catch any inference that this book was set in anything other than the 20th or 21st centuries (there are cars apart from anything else) so what Vikings were doing running around, apparently raiding villages, in 1850 I don’t know.

We do have some excellent analysis of class and drugs through her friend Reiner. The abuse and neglect of his father drives him to make desperate decisions to protect his mother and sister and to ensure they have enough money to live – decisions that have dire and dangerous consequences and underscore the trap that poverty and abuse can push people into.

This book has to go down as one of the most frustrating I’ve ever read. It had a lot of potential. It had an original setting. It was different from most Urban Fantasy, so many unique elements. I also am quite fond of any book that explores the themes of death and reapers – I like them. But this book didn’t come close to meeting the potential it promised. The protagonist was too passive, too uninvolved, too uninformed, the world was too little developed and too little explored and the mundane just overwhelmed too much of it, rendering the fantastic a background colour that didn’t burst forwards until the end of the book. Too much of it just didn’t make sense or feel like anything a sensible person would do. It’s a shame.