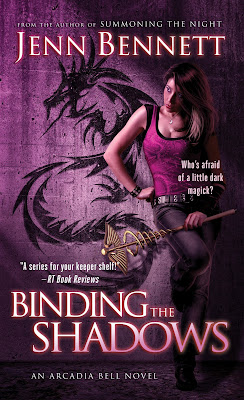 Arcadia Bell is learning to live with her Moonchild magic, getting used to it and using it more often in her daily life – and for missions foisted on her by Dare.

But even putting aside his leash, Arcadia finds herself on a mission when Earthbound demons rob her bar and injure Kar Yee, her business partner. It’s embarrassing but worse, these demons had power far beyond what should be possible and who knows what damage they could do if these super powers spread.

And her Moonchild power is expanding and changing – changing her as well in ways she doesn’t understand but are terrifying. Almost as terrifying as her mother still being alive – and looking for her.

Then there’s Lon’s in-laws, Jupe’s aunt and grandmother are in town for the holidays, ready to check out the new addition to their family.

This is a series I’m keeping my eye on because it feels like something with so much potential. We have a very interesting unique world with magic and demons combined in a way I haven’t seen before with a number of interesting twists to keep it going. The world was great and some of the characters had potential – but I keep waiting for the story to reach that potential. I think I’ve read all three of these books with a sense of anticipation – waiting for them to iron out the flaws and really be what they could be.

The first thing I liked about this particular book in the series was the foundation of it. No more Arcadia being threatened by Dare, none of her being dragged into the plot against her will. In fact, she outright stood up to him. Instead the story was based on a robbery at her own bar and her own concerns about what the demons with super perks were doing. She was personally motivated and also active in tracking down the culprits and finding the answers – more so than she has been in the previous books. At any point she could have stopped pursuing this and got on with her life – she wasn’t being threatened by anyone, she wasn’t being forced and she wasn’t doing it for other people; ultimately Arcadia was pursuing her own agenda for her own reasons in her own way. This goes in part with the fact she’s also more assertive and more confident than in previous books. While she still has doubting moments with Lon, Arcadia is now more confident that, yes, she does deserve him and she’s more able to tally her achievements and be proud of them. It’s a precious thing to see a protagonist so openly embrace her self-esteem

The story has a decent mystery – they had leads and red herrings, brief moments of actions and chases. They had dead ends and became frustrated but didn’t dwell on it too long. I won’t say it was stellar or particularly exciting. I think the main thing stopping it from being a really good mystery is that the two main plots – finding out about the super perks didn’t work together well with discovering the answers about Arcadia’s Moonchild powers. The storylines didn’t mesh together, they got in each other’s ways. Then there’s the family – while I loved the scenes with the family and Arcadia becoming more part of them, they did detract a lot from the urgency of both plot lines. After all, neither can be life and death in importance if you’re going to take time out for a family dinner. In some ways I like that her life isn’t entirely derailed by the plot line but it did reduce the urgency of the story

Arcadia has moved on a little from her precious reluctance to use her powers, which is supreme relief as I found it more than a little unrealistic. However, while she has lost her reluctance, her mother lurking around has given her another reason to be hesitant about it, so we’ve got her tiptoeing around them again as well as them randomly not working for reasons unknown. I’d kind of like her to just have her powers and be done with it. Especially since there are times, like during the robbery, where her power just seems almost forgotten or suddenly require a ridiculous amount of time to work.

But on that world building front – I’m getting irritated by how little everyone even knows about rhe Moonchild and how little effort Arcadia has actually made to find out. Dare knows, loads of demons give her special titles, it’s apparent that the magical organisation she’s a part of has some relevant information – but she has made no real effort to follow any of that up. For that matter, Jupe is an archivist with an amazing library, a web of contacts and a lot of money, how come he doesn’t know more? It doesn’t make sense for them to have made so little effort and achieved so little success to discover exactly what Arcadia is. I also feel that the whole power boosting elixir was brushed over somewhat. They stopped it being distributed but who made it, are they still making it? How is it made? Could someone else make it? Considering it was the main concern for most of the book it all ends up being rather simplistically closed.

Jupe’s aunt and grandmother joining the story went a long way to helping unravel how his mother, Yvonne was presented. While she was still demonised there was a humanising element – she still utterly fails as a mother and family member. But at least we had Jupe’s Black family being present and loving and caring rather than having hem only represented by Yvonne, the failure of a mother and evil predator. The counter narrative was sorely needed and showing that they are a close, affectionate family helped a lot.

I’m not quite sure why we had grandma be all judgmental. Especially since it didn’t go anywhere and was resolved super quickly. It felt like padding – like she couldn’t possibly get one well with all of them so we needed some extra conflict. I especially don’t like it because Rose’s slutshaming just wasn’t addressed – the terribad idea that Arcadia and Lon may be *gasp* spending the night together was never really challenged despite it being judgmental and rather nonsensical.

I want to see more of Kar Yee. I quite liked her reaction to Arcadia’s grand revelation because it was a betrayal of trust – and I hope this will bring them together more. While there are several women in the plot, Arcadia doesn’t seem to spend much time with them, not by choice anyway. She’s so focused on Lon and Jupe, it’d be nice to see her spend some more quality time with her best friend.

Ultimately, I think that the Arcadia Bell is getting better, and is a good book series I always enjoy. But there are always elements that stop it being excellent to me. They’re good books, they’re decent books, I generally enjoy them – but I don’t love them and they remain a series I could always read – but wouldn’t feel heartbroken if it stopped tomorrow. But I always feel like this, with its unique world and some characters with vast potential could be so much more.