Taken by the Others (H&W Investigations #2) by Jess Haines 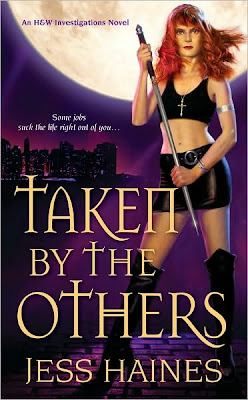 There’s a new vampire in town and he is not happy with Shiarra – blaming her for killing his progeny. Of course, it’s only a deeper excuse to make a move against Royce over a deep seated grudge that goes back centuries. And Shiarra is a perfect tool to advance that revenge.

But who can protect her from the revenge of a vampire that ancient? Royce, perhaps – but would that mean putting herself even more under his control and how sure can she be that she can trust him?

But are the authorities sufficient to hold off a being this ancient? To be safe, Shiarra needs to go on the offensive.

This story takes the excellent world that began in Hunted by the Others and starts to play in it nicely. The world doesn’t expand but it’s more us getting used to the world that is presented – because it is so huge it’s good to have a book that lets us get used to it, let’s us explore what has already been revealed rather than pushing the boundaries back. The world is coloured in, more details added, we get an idea of the politics and the way the different groups work together and the challenges of this supernaturally integrated world. I like that a lot – not just because I like the world but because so many urban fantasy novels feel a desperate need to add something new with every book – some new revelation, some new shiny creature (usually Wendigos) every book and never really develop what they have.

Shiarra herself has also grown somewhat. She’s still scared of the Others (and tells us so, at length), but is capable of thinking beyond it and is less inclined to collapse into a puddle of goo whenever challenged. She has a level of confidence that makes her fit the role a bit more, though she has room for further growth.


I do like the story itself – the duelling vampire masters using Shiarra as a tool to further their own vengeance. It flows well and has some interesting twists, though I think it has some convoluted moments (like Royce being able to convince the police that he wasn’t responsible for a slaughter) and the premise always shakes me – yes the woman the enemy loved is dead. 2,000 years ago. Time to get over it and move on, get some therapy, go eat a vat of ice cream, whatever you gotta do, but time to move on. But other than those elements (and the White hats, which I’ll get to), it worked – Shiarra is trying to find a way out of her situation, she doesn’t trust hardly any of her allies and the ones she does trust don’t really have a reason to stick their neck out for this battle. She tries to find a way through and while not all her decisions are sensible, she makes them in her own right and seeks her own path. She learns a lot more about Royce and their relationship gets both closer and a lot more complicated in a very organic way. The story works. I never felt the need to put it down and I never felt the need to avoid it. I enjoyed reading it, I resented interruption and I was interested to find out what would come next.

There are 2 things that jar me from the story – one is that the writing has a habit of being long winded. I get that Shiarra is afraid of the Others, there’s no need to repeat it constantly. The second thing is that she makes some bemusing decisions. Like she decides to call her friends who are due home tomorrow – and then assure them they don’t need to come home. Why call them? Why leave them with that worry? Or she decides to make the call about hate groups and monsters in the middle of doing her grocery shopping with everyone in the super market staring at her. She feels pity for the man who kidnapped her – within hours, possibly minutes, of being kidnapped and oddly decides to believe everything he says. She continually does these things that are… bemusing to say the least

I really don’t like how the White Hats are portrayed in this book, especially in the beginning and after the first book. As I said in my review then, I hate how the Others are portrayed as a marginalised group and that discrimination and prejudice against them is views in the same way as bigotry against POC or the disabled or GBLT people.

But if we’re going to have that element then it needs to be consistent. And if we’re going to present the Others as a persecuted group, then the White Hats, a group that burns down their businesses, murders them on the street et al is one of the most violent and horrific hate groups out there. Even aside from that, the White Hats appear on Shiarra’s doorstep with a gun pointed at her. They’ve made it pretty clear the full nature of their organisation

So why debate and agonise over whether to join them or not? Why expect them to back her up? Why does she even feel that she can get them to work with vampires? For that matter, why does she think encouraging them on the understanding “hey you get to kill a vampire, it’s all good!” is an ethical or even remotely sensible tack to take? Working with a Hate group because your enemy happens to be one of the people they hate doesn’t make working with a hate group any more advisable or sensible (or moral) – especially when your allies, friends and loved ones are also members of the hated group.

Yes, they rescued her – but, again, even she could see why they did – they were less out to save her and more taking a shot at a nest of vampires

This is a problem I have with Shiarra; her competence as a protagonist frustrates me. I will say she has made vast improvements since the last book – in the last book I was amazed she even managed to be a private eye. In this book she is far more competent and capable with much less overwhelming fear. Unfortunately a large part of that competence does come from her magical belt – but she is generally a stronger protagonist despite repeated needs for rescuing.

Unfortunately she is one of the few women in this book – her business partner has been relegated to elsewhere and the only other woman is Mouse – a woman who is quite literally a silent weapon. I do hope she will be more in the future but to date that’s the extent of her character. I could also do without the extreme jealousy being showed by Chaz. Can we have a werewolf who is not a possessive arsehole? He makes no allowances for circumstances or the situation and is stuck very much on a “my woman, rawr” mentality.

In terms of other minorities we got nothing, pretty much. Some very very minor background nameless characters, the odd dark skinned person and an Asian doctor. We have some unnamed gay vampires who are cowering in the home and even in a kidnap situation, Shiarra has time to mention her utter shock that ZOMG GAY PEOPLE and comment on their dress sense. Really? It’s references like this that make me want to dress in hessian sacks.

I think this book is a better book than the first book – many of the issues that annoyed me with Hunted with the Others have been addressed, if not necessarily resolved. But there are new issues with the White Hats and Shiarra’s decision making that stops this book going from being better to being massively better. Still, it’s heading upwards and is a good book besides. It’s definitely a better book and made this series one I want to follow.