Review: Hunted by the Others, by Jess Haines. Book 1 of H&W Invesitgations 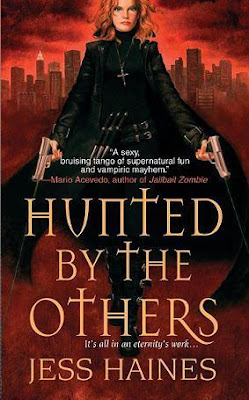 Shiarra is a private detective – for now anyway, though her business is in severe financial difficulty and it’s only with the intervention of her very wealthy business partner that they’re even keeping afloat at all.

It’s these money troubles that drives her to accept a case from the Magi. Despite never working for the Others and having no wish to spend any time among the relatively newly revealed supernatural creatures, the offer is simply too good to refuse. Even if it does mean spying on a vampire to learn about a highly in demand artefact that has gone missing.

Unfortunately, she quickly finds herself revealed – and threatened – by the vampire that tries to put her very life in his hands. And she comes to the attention of the White Hats, a fanatical group determined to eliminate the Others. Already that’s more than complicated enough, but then people start dying to attacks that make no sense and events are being manipulated by a shadowy hand above and beyond the immediate players.

This is the kind of Urban Fantasy world that is guaranteed to pull me. Diverse creatures, integration into the human world, magic and vampires and werewolves, politics between the different groups, politics between them and the humans – it’s just the kind of world I love. No, it’s not completely knew, we know all of this before and none of the creatures here really strike new ground – but it’s an old pattern done well with enough original twists to keep me interested, keep drawing me in and keep enjoying it without think that it’s been done before. It’s a variation of an old theme – but it’s a good theme, it’s a fun theme and while the picture is similar, the details and story are different.

And it’s very well written. We have a few unnecessary monologues, but the pacing is excellent. We have a vast amount of information about the world but it’s all presented in a really natural way that completely flows into the story. The plot also has several interested parties, each with their own agendas and similar plots – the mages, the vampires, the White Hats – even Shiarra’s family but they are all given the attention they need and deserve without dragging the plot into a dozen different directions or getting us hopelessly lost. Couple with the necessary world building, the semi-love triangle, a decent cast of characters (even if they didn’t all play a huge role, they were all characters and there was some level of making them more than just floating names) keeping it all balanced was an act of true skill.

No matter what else, this book was an easy read because the writing just kept it all moving, kept me absorbed and never derailed me or left me floundering or bogged down – despite many chances when it could have.

Which in some ways is so very refreshing because it is different and original. And it’s nice to see her grow in knowledge and experience and work her way out of it. In theory… yet… it’s hard not to be frustrated by the character – if she’s this afraid of the monsters I’m surprised, despite their money worries (though her very rich friend will support her), she took the case. And if she can’t make her business work without monster money then is she in the right business? And if she can be made to break a confidentiality clause and spill all her secrets because a vampire flashed his fangs at her then why would anyone trust her in such a sensitive job? Yes she’s afraid – but there’s fear and there’s cowardice. She also doesn’t seem to be all that good with at her job – she doesn’t seem to do or achieve anything through her PI profession, her plans don’t point to any particular knowledge or expertise. Her business partner has to set her up with her plan to approach Royce (who she didn’t even recognise), Arnold has to take her to get equipment and weapons – magical and otherwise (which she doesn’t question, despite the obviously illegal source). And the magical belt – which is certainly an awesome concept – gives her her impressive fighting skills which leaves me wondering what she brings to the story. There was apparently some event in the past that brought her to the attention of the Others – but we’re not really told what it is. So I keep asking why the Mages, Royce, anyone at all is interested in her? What makes her so special?

I’m torn between liking the normality of the main character – that she’s a person thrust into circumstances beyond her control, that she has a normal life, a mother who is worried about her singleness, money troubles in her business and a healthy fear of the supernatural (which, unfortunately, can spill over into some monologues) – and disliking the fact that she seems such an ill-fit for her own profession or a protagonist that’s particularly competent. And that’s not a bad thing – a protagonist doesn’t need to be competent or super brave, not all people are – but it can be frustrating at times. I think she’s a character with a lot of growth potential, but I also really think she will grow.

I do wonder why Shiarra didn’t call the police. The supernatural is integrated into the human world after all – why have these huge contracts allowing humans to sign their lives over the supernaturals if they don’t have laws and procedures for humans who feel like they’re being coerced into doing so? Let alone the breaking and entering into her house. I also feel that having the papers doctored AFTER Royce signed them and had them notarised was… of dubious use. It’s not like Royce couldn’t have challenged that, especially given how unusual they are when so doctored.

There was a weak love triangle that quickly petered out never being fully developed – but Chaz has all the hallmarks of a classic alpha-male, werewolf woo-woo justifies being possessive and stalkery type, which I’m not in love with.

I have to say part of the world building that didn’t sit with me was how and when the Others revealed themselves to humanity. After 9/11 the werewolves of New York openly revealed themselves because they wanted to help during that terrible atrocity – followed quickly by the Mages and the Vampires and it was a big, patriotic moment that did a lot to help them get accepted.

Which is fine, in and of itself, except the related implication is that for 6,000 years of recorded human history, containing innumerable, horrendous atrocities the Others in different nations of the world never felt the need to do the same? Through genocide, continent destroying wars, plagues that decimated the population – they weren’t moved in the same way American Others were by the Twin Towers? It didn’t sit well with me – especially when added to the fact that Others are generally accepted in the US but not in “other nations” which kind of wants me to present a history of equality movements to the author.

And why equality movements? Because the appropriation is really high in this book. Prejudice against the Others is called “racism” and being careful with your words around them is “PC”. For some unknown reason, the hyper-able vampires are protected by the Americans with Disabilities Act. This is a huge theme and thread throughout the books – it’s not just that they are hated or groups want to destroy them, but there are direct parallels made with oppression and minorities.  To add extra irritation, it’s annoying that these fake minorities managed to get a full load of legal recognition in their single decade of existence that actual marginalised people had to fight for centuries for – and some of which they still don’t have.

It would probably help more if minorities made a meaningful contribution to the book – but they don’t. Actual oppressed minorities are thin to non-existent on the ground.

I would say this is a series with immense potential – because I do love this world, it’s the kind of Urban Fantasy that always attracts me. It has a lot of concepts that I’m curious about and a lot of things can be developed. I also think Shiarra is a character with a lot of potential. All of which I think can hold together because it’s a very well written book – there’s a lot of good that can come from here, but there’s a lot that needs ironing out as well.