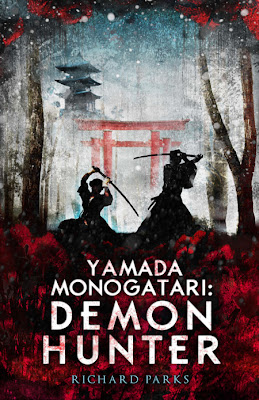 Lord Yamada no Goji is an impoverished Lord in Heinan period Japan. He has very little property to his name, and a bad sake habit to go with it. But he also has an agile mind and a great knowledge of the ghosts, demons and other creatures that plague Japan.

Through this series of short stories we follow Lord Yamada as he faces a variety of the beasties that plague local daimyo who have heard of his excellent services – as well as the schemes he gets gently entangled with due to his contact with Princess Teiko. Demons, ghosts and always the tricky youkai cause problems across Japan and many times the answer is not always as simple or as obvious as just an exorcism or a monster to kill. Lord Yamada is called when things are delicate, when things are complicated and when discretion is needed.

Often assisted by the thoroughly disreputable priest, Kenji, Yamada has the perfect mind to untwist this myriad mysteries.

The world setting is Ancient Japan during the Heian period and Lord Yamada no Goji is an impoverished lord of that era, though with skills that make him in demand. I think this book is highly authentic to its setting – though it’s difficult for me to say since I’m not even close to an expert in Heian Period Japan. I’ve done some googling and some reading and that’s not even close to enough. But within those limits of my knowledge, I found no contradictions and a lot of richness. This book feels extremely well researched –just the fact it’s taking a period of Japan’s history away from the extremely popular Shogunate period  is an indication of that in itself. Imagine, a whole book set in Ancient Japan without a single katana! That alone makes me think it’s authentic because authors, especially western authors, generally salivate at the opportunity to stick katanas everywhere.

And the sheer amount of elegant description that goes into this book gives a strong sense of authenticity. There is so much detail here, so many different factors being referred to, to many political events being eluded to and just generally such a rich tapestry of the time, era, religions, mythology and people. There is a lot of research in this book – a lot of work has gone to make it very true to the era and setting. It hasn’t just relied in Wikipedia or google and it shows in the writing. It’s one of those historical novels that has a true feel of time and place about it.

Related to that, the writing is excellent. All this information is conveyed, all this beautiful detail about the time and place, but never is there an info dump, never is it clumsy, never is it convoluted and never does it drag. It’s always fascinating, always well paced and doesn’t lose my interest for a second. This is one of those books I can gleefully read cover to cover without pause. And that’s from someone who doesn’t usually like short stories. But these flowed naturally into each other, they told and overarching plot and each just built on each other extremely well despite containing neat, separate story arcs. And each story was neat – it wasn’t a concept drawn out to turn it into a short story nor was it a rushed full length novel condensed down. There were no loose threads, no elements that strongly needed developing. Nothing left handing or brushed over. They were neat short stories ideally suited to the short story format.

Lord Yamada and Kenji are excellent characters. They’re not flawless or perfect – which is always fun for protagonists and major characters. The reprobate priest and the drunken lord, both aware of each other’s failings, but both living with them and bouncing off each other well. They have an excellent friend dynamic which ranges from fun to funny – but always has depth. And Lord Yamada is an excellent, skilled protagonist without special powers or magic or fighting skill – he is in demand because he is intelligent and educated, because he thinks. There are better swords, there are better magicians and there are certainly better priests – but there aren’t better brains.

The creatures they face are also interesting because they take us out of the standard western context of so much of Urban Fantasy. We don’t have vampires and werewolves, we have oni, youkai and ghosts.

I have 2 issues with the book. Firstly the female characters were few and not well developed. In many of these short stories, women just don’t have an appreciable presence. In A Touch of Hell there’s a dead woman to avenge, Sanji’s Demon has a brief appearance of the Lady Takara who has been manipulated and victimised. Lady of the Ghost Willow has 2 women who appear as love interests and serve as red herrings.

There 2 somewhat developed female characters in the book and they are strong, capable women – but strong and capable means “cunning and conniving” the two strongest being Lady Kuzunoha – a fox spirit pretending to be human. And Princess Teiko, Lord Yamada’s unrequited love interest whose plotting is truly masterful and awesome in scope. I love both these characters – but there’s a lot of dead women in this book, a lot of women who are side notes a few women who are dangerous monsters and not a lot of women who are major characters.

My second issue is the single gay man in the book. First I have to say how impressed and happy I was to see a gay man in this book – historical settings are so often used as an excuse to erase. Nor did the books make the mistake of assuming historical homophobia. So there was a lot of positive here. But, at the same time the gay men has an unrequited crush on a straight man – and that unrequited love causes him to summon a spirit that hurts and nearly kills that straight man. There’s such a trope of gay love being predatory and dangerous – especially gay men lusting after straight men that it’s unfortunate that this was the inclusion.

Other than that, this book did have some elegantly represented commentary about class. Lord Yamada frequently has money troubles, but even in his poverty he acknowledges the difference between him, with his title and his connections and the common, poor people he meets. He recognises his own advantages. We also see the difficult choices and plight that can be faced by societal outsiders – such as the Emishi.

When I got this book, I didn’t realise it was short stories – and I was disappointed. The disappointment quickly faded and I was quickly and utterly immersed in these characters, these worlds and this setting. When I finished it, I was disappointed, not because there was lack of closure but because I badly wanted the story to continue, I wanted more tales from the life of Yamada no Goji and the excellent world he inhabited. It was enthralling, mysterious, beautifully written, excellently researched and a truly wonderful read – highly recommended.

We received a  copy of this book through Netgalley. It is released on 5th February 2013