Kill Me by Alex Owens 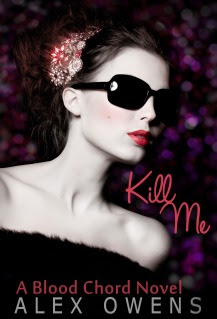 Claire has a job to do. She’s at a music industry conference for a few short days where she can try and get as much PR business for her boss as possible. Thankfully, she’s very very good at what she does. Even with the distraction of her husband ringing constantly with hi passive aggressive attacks and their failing marriage.

But there’s a major distraction – Bette. Beautiful, seductive Bette who scents out Claire's untapped supernatural potential and introduces Claire to a whole new set of experiences.

Not least of which is vampirism. And her Bisexuality. It’s a steep learning curve for Claire which only becomes more complicated as vampire politics raises its head.

Claire is a character with a lot of depth and development – far beyond the vampirism of the story. She has a family, a rocky marriage, a complicated PR job, she schmoozes clients and develops ad campaigns, she builds some friendships – there’s a lot going on with Claire even before we consider the vampire angle

Her relationship break up with her husband was probably the most covered storyline. We see the foundation of it and how it progressed towards break up. It felt very real with a lot of substance to it. Similarly, the work she is doing promoting the one company she met at the conference was also quite detailed with a lot of information, character interaction and relationship. But both of these – the most developed storylines – are background stories, incidental to the dominant plot. They add flesh to the character but I don’t expect them to lead the book.

Don’t get me wrong, I liked these storylines. As I said, her relationship drama with her husband has real depth and realness. And her flirting, fun, bantering work in her job is extremely amusing to follow and either could be a non-supernatural story in their own right, I think. I enjoyed them, they were interesting and I’d probably be happy to read them even without the vampire element (and I never read non-speculative fiction).

But they were in a book with a vampire element – and those vampire elements weren’t developed enough for me. We have Claire’s transformation into a vampire – ok, what does that mean? Vampire society, vampire abilities, vampire weaknesses – she only seems to be told or find out the barest minimum about her new life. She actually continues her day job and daily routine with only a few minor hiccoughs. We touched on some elements – her going to the club and seeing the other vampires and how they interact, for example – but it feels like it didn’t go very far. In fact, it is Claire’s ignorance that lead to Gregor trying to ensnare her. And we have Claire’s specialness is constantly hinted at but there’s no indication of why she’s special or how she’s special or what it means. Vampire society itself is only introduced in the closing chapters of the book and then only touched on shallowly. What little bits we did see I loved – I think there is a really deep, fun story and world to be told and explored here – but I needed to see more. Looking back to review this book, I’m having trouble remembering exactly what happened in the book because it didn’t stick.

I was just left feeling that there were lots of hooks – lots and lots of hooks – but they were all pretty shallow. Anyone of these could have drawn me in – her job, her marriage, her being a new vampire, vampire society, her specialness, even her relationships and coming to terms with her sexuality. 100 hooks – but none of them were well baited. I’m interested in all of them but none of them were particularly developed enough to be compelling – I’m not drawn to follow any of these threads. I feel like I have a really deep and strong side story to follow up on, but the main plot is kind of floppy.

But there is a lot of potential there – with magic and witches, with vampires and the 3 member council of leadership, with Claire’s differences that set her apart and with her more mundane – but much more developed life

What is fascinating and different about this book is that nearly every woman in the story – including the protagonist and in a female centred book – is bisexual or a lesbian. They are overtly flirty and sexual and sensual and the attraction between Claire and Bette is no less than her sexual attraction between her and any of the male vampires. In fact, if anything, her relationship with Bette is primary ahead of her relationship with any of the men at least partially because Bette’s her maker.

Of course none of the relationships end happily, but that’s setting up the book for a series – and the key is that none of them end happily – not a doomed same-sex love affair followed by her going to a man. Unlike most Urban Fantasy I’ve read with a bisexual protagonist, the same-sex partner isn’t some distant past, some nebulous possibility or cast as an inherent second choice to the same-sex partner – Bette is definitely the one who is the most rhapsodised about of the potentials. It’s one of the better portrayals of a Bisexual protagonist I’ve read in the genre.

Women did appear on her radar only after she met Bette the super-sexy vampire and I would be leery of woo-woo induced bisexuality which I’ve seen before and aren’t a fan of – but any possibility is nicely contrasted by the other bisexual and/or lesbian characters who are 100% totally human and un-woo-wooed.

Claire also has an interesting passage in accepting her sexuality – women appearing on her radar after she met Bette and her incredible sensuality, her sudden exposure to multiple sex partners, to group sex, etc. There is a sense of “eww, this isn’t me, it’s wrong!”  but more of a sense of her horizons broadening and growing. It’s an interesting plot all on its own.

We do have some POC but they are in relatively minor roles and I’m not keen on the descriptions used.

All in all, I’m deeply intrigued by this book – and by Claire as a character. She has a life with some interesting conflicts that’s definitely going to go somewhere I’d like to follow. But I do feel we’re not as far down that road as I’d like to be. I’d continue reading the series based on what I’m hoping may be the direction rather than based on the direction that is established. Still, it looks like it will be worth following.