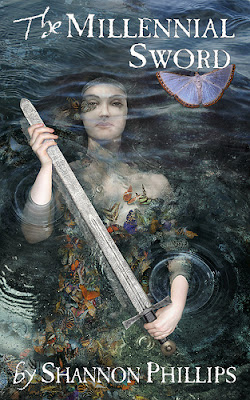 Viveka has arrived in San Francisco from the Midwest to start a new job. That’s already pretty challenging, a new work place, a new city, finding a place to live (despite a limited budget) and trying to keep her very grumpy cat amused and tolerant during the move.

And then a woman gives her a sword and runs off. A sword that virtually no-one can see – Excalibur. She’s just been recruited as the new Lady of the Lake with a solemn duty to try and protect the people of San Francisco from Morgan Le Fay – queen of the fairies who has a specialty of kidnapping children. And like it or not, she can’t stand by while children are taken – especially with recaps moving against her. She has a few friends, a complicated love life and a lot to learn.

This book did a very good job in setting up the world, the characters and the concepts of the story. By the end, everything is firmly in place and it’s a lot of fun getting there, from battle the tomte in her home, to swordfighting with the Society for Creative Anachronism to just moving to a brand new city, starting a new job and trying to set up a new life. We get to know Viveka, her life, her duties and the people that are part of it.

But I felt the plot itself was a little floppy. Viv gets the sword and gets on with her life, she makes some adjustments like spending more time with Noah practicing and going to an SCA meeting, but otherwise she gets on with things. I don’t object to the story, but she’s very reactive – which I can understand in the beginning but she seems to continue in the same vein throughout. Of course, I can’t criticise too harshly because I can’t think what she could have done or what other sources she should have contacted or what information she should have found out – but the plot didn’t really draw me in because it felt like Viv was constantly reacting. I don’t think we left the book knowing much more than we knew to begin with – and a lot of what we know was packed into the last scene.

I think part of that as well is that so many things were handed to Viv. She was handed the sword, it wasn’t something she studied or sought out. Once she had the sword she ran into Piper who gave the free info. Through Piper she ran into Raven who gave her magical help. She went to work and ran into Noah who happened to be an SCA member who knew how to use a sword, knew Arthurian legend and was happy to research for her and teach her. It felt like a lot fell in her lap without her seeking it out or doing a whole lot to get it. It’s not that she’s inactive – she fights a dragon after all and rides to the rescue of kids and faces down the wild hunt. She acts – but she acts when directed.

It wasn’t boring by any stretch and it kept me amused throughout. There weren’t moments when I wanted to put down the book down because I was bored. But there were moments when I finished a scene and thought “that was fun – but why is it relevant?”

This book does have 3 gay characters and they’re largely free from stereotype (largely. We had a lot of “sweeties” dropped in there). I quite like them – though it’d be nice if Viv could meet them in the Castro without having to constantly remind us of the sex shops (seriously, in no other location in San Francisco are the local shops relevant unless Viv is actually shopping). I would come close – cloooooose – to saying that they’re pretty flawless side characters and certainly vastly better than most of what I’ve read in the genre. The problematic aspect is they are pretty small characters, they don’t appear regularly or form a major part of Viv’s life – or even a minor part of Viv’s life and one thread connected when they had screen time: Viv needed something. One keeps giving Viv magical advice and assistance, one, a near complete stranger, is roped in to helping her fight Redcaps and the last is an enemy.

I like the characters, but there’s far too much of a trope of gay people being little more than servants for straight folks. If there had just been some greater role for them, some level of them having social ties with her, having a reason to like her or any reason to not think “aw hell it’s that woman with the sword who’s obsessed with the sex shops again, and she’s seen me now I have to say hello!” I’d have been a lot happier

Raven, that magical assistant gay man, is Asian and her supervisor at work is a Black woman so we have some racial inclusion that was, again, largely free from stereotype and offence but it would be a stretch to call them side-characters. They are there though and Jennifer is capable in her own right - and I hope they'll be fleshed out in future.

Viveka is an interesting character in new situations both conflicted and determined. Originally I think she adapted to the whole Lady of the Lake gig perhaps a little too easily but she did come back with a lot of doubts and questions, but whatever doubts she had are eclipsed by the simple fact that kids are in danger. I liked that she did sidetrack a lot of the usual “whyyyy meee, it’s soooon unfair!” we see in the genre and instead got on with it – kids were in danger, there’s no time for whining.

In all, it’s a fun read. It has an interesting world, but one that could use development. It has some potentially interesting characters that, again, need to be taken further. I think it’s a series with a lot more to give, on its own it’s still a fun book.

A copy of this book was provided by the author
Posted by Sparky at 12:00 PM