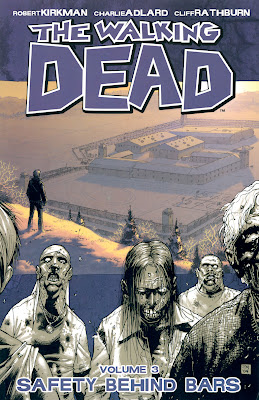 In this volume, the survivors from Hershel’s farm arrive at the prison and begin the arduous task of clearing it out, cutting down hordes of zombies to clear the yard and open up the cell block as a safe – and far more comfortable – place to live. It comes to something that the prison is seen as their dream home, due to the security offered by its fence.

But the prison isn’t empty, Axel, Dexter, Andrew and Thomas are inmates who have holed up in the prison, relying on its vast reserves of preserved food and utterly cut off from the outside world and most the rest of the prison bloc. It’s an uneasy act to add the 4 convicted inmates to the group.

Largely safe from the zombies and planning long term survival there, Rick invites Hershel and his family to join them since the farm is being hit by more and more zombie attacks in the spring and Hershel’s skills as a farmer could make the prison more sustainable.

While zombies are held back, internal pressures break – Julie and Chris engage in a suicide pact, sending Tyreese into a dark place and revealing that even when not bitten, people still come back as zombies which drives Rick to think about Shane, buried alive. Add on to that, one of the inmates is far from harmless – and begins his own killing spree which sets off a new round of conflict between factions and raises questions of how you handle this without the systems of government and order?

I am impressed by how well the theme of each comic volume is maintained, easily fitting together and maintaining a coherent whole. In this volume we have a definite feeling of death, reaction to death and adaptation to death all around them. This becomes especially poignant not just because they’ve finally stopped running so can reflect on what they’ve lost, but also because even in the prison there is no safety. With the murder of Rachel and Suzie, the attack on Andrea, the suicide pact between Chris and Julie and even Tyreese rushing in and nearly getting himself killed – even when zombies are not directly responsible, the whole changed world has made death a constant possibility. Many of the characters talk about death – Allen telling his children they need to get used to it and not let it hurt them. Dale and Andrea reflect on how inured they are to death that they’re not even upset by it any more – as well as considering their own mortality and how irrelevant it makes the age gap between them.

This also is a book about the toll the zombie apocalypse takes on people. We saw this beginning with Allen and even Hershel, but now it’s hitting everyone hard – Rick has his moments of blistering rage, Tyreese has his horror over his daughter. More and more people have lost someone and the grief and pain is building up. There’s increasing talk – even from Dexter – about people cracking under the strain. A lot of this is excellent foreshadowing  but a powerful reflection of these characters as people, as normal people, being put through unendurable conditions that are hurting them psychologically as well as physically. The characters are recognising their own mental damage – and that of their fellows.

We’re also returning to a recurring theme of the series – while zombies are the constant background threat, the thing which will truly rip you apart is humanity.  In fact, after this volume, more of the characters have died by being killed or killing themselves, than have been killed by zombies

Some other issues that arose in this book: First of all – Lori.

AAAARGH, she’s so annoying on the show and she’s still a gazillion times more annoying in the comics. It’s like whatever Lori says will always, always be wrong

In fact, most of the time Lori opens her mouth, she has a point (the main exception this time was accusing Dexter of the murders and having him locked up). The problem is that she’s the great big font of negativity. Everything she says is gloom and doom – even Carol calls her on it. Everything she says is to criticise, complain or angst – and when she does criticise, even for good reason, it’s presented as heckling. She’s not shown as a person expressing legitimate complaints, she’s the heckle, the nag, the scold. We’re not only never expected to agree with her – but we’re never expected to see her as a reasonable person with anything resembling a point. This only gets worse with her pregnancy because now any complaint she has is being dismissed because of PRGENANCY HORMONES! Because a woman’s brain completely turns off when she’s pregnant apparently! Again, this isn’t just a case of some mood swings, it’s used as an excuse to dismiss anything and everything Lori has to say – even when she’s not actually wrong. Even she herself says she’s overreacting and jumping to conclusions and “not thinking straight.” She’s buying into the idea that she SHOULD be ignored, she is validating dismissing her viewpoint because of the stress or pregnancy or whatever that she just can’t handle and her judgement can’t be trusted.

Contrast that to anyone else questioning Rick like… well, that’s just it. You can’t because there isn’t really any. She is the voice of dissent and by setting her up as the hectoring nag he becomes the forthright, sensible ruler taking the leader and his opponent is just over-emotional silly woman. There’s relatively little dissent beyond that but, again, that’s usually cast as obviously wrong (like Hershel chasing them off the farm) because of a brief situation. Also of note is that Rick is far more likely to consult with Tyreese, Hershel and Dale than he is to lay down the law: again, at the decision to hang Thomas, contrary to it being a dictatorial decision, many people (mainly men) spoke up to add their opinions.

This added pedestalling of Rick means that we get no coherent question of even his most controversial of decisions – in particularly here we have the Death Penalty with the opponents presented only as the hectoring, emotional Lori who just can’t think straight – and Patricia who’s misguided mercy nearly gets her killed – and she aligns with the bad guys openly casting her as, well, misguided at best.

Lori, in turn fits into the overall portrayal of women in this series as wea
ker, secondary, less in command, less capable and less listened to. We’ve complained about it in the last 2 books as well. This book had 2 changes – the first was a negative. With both the serial killer and the conflicts and arguments we have a lot of misogynist language being thrown around – the insults and rage are expected but you can have insults and attacks using words that aren’t linked on misogyny. There is an element of not whitewashing reality with Thomas – a serial killer who loathes and preys on women.

On the positive side we have Andrea. The best shot in the group, she rejects being sidelined when Tyreese and Rick fights and insists on being included in the fighting. She’s much more pro-active and steps up as the group’s third fighter.

Tyreese has also fully stepped in to the role of second in command and even occasionally co-leader with Rick. More than anyone, even Dale and Hershel, it’s Tyreese Rick talks to, asks advice from, confides in and talks to as a friend. Is he a big, strong, angry Black man? Yes, he is. But he’s also a lot more than that – and he is deeply respected in his position in the group and even loved.

And because there has to be a negative – there were distinct racial undertones in the way Dexter was treated. Yes, he was the murderer and that was the reason for locking him up – but we still had people referring to his race in reference to the murders. While, again, we can consider this being an accurate portrayal of reality and prejudice doesn’t disappear, it lacked the challenge such portrayals need. The complete lack of apology for locking him away was utterly contemptuous as well.

And we have the first depiction of a same-sex couple in the comics, which is definitely something the show deviated from. But… well, it’s not exactly celebratory. Dexter is represented strongly as a prisoner engaging in “situational homosexuality” and he’s pretty happy to manipulate the very needy, very vulnerable Andrew. It’s a predatory relationship, if it can even be categorised as a relationship – and to top it off, Dexter uses the insult “f@ggot” during the attack which in addition to being nonsensically homophobic, seems like an express rejection for the character: a “no homo” moment for the reader.

There’s still a lot of depth being displayed in the comics, really well maintained and developing and it’s good to see some progress on the portrayal of the female characters, but it has some improvements yet to make.