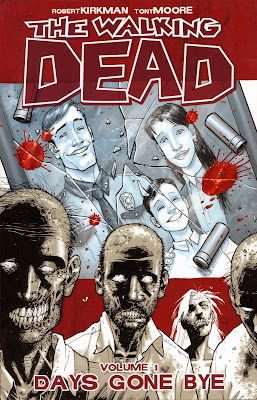 While The Walking Dead TV series is on hiatus, we’re going to work our way through the huge backlog of Walking Dead comics - both to tell the often surprisingly different story that is there and compare and contrast how the threads are handled differently

And because they’re awesome and we love them

In Volume 1 (the first 6 comics), Rick wakes up in the hospital, meets Morgan and Duane in his old neighbourhood; visits zombie-infested Atlanta, being saved by Glenn and arriving at the camp. There he rejoins Lori, Karl and Shane, as well as meeting Andrea, Amy, Dale, Jim, Carol, Sophia, Allen, Donna and their twins.

The comics open extremely atmospherically and there are very close parallels between the comics and the TV series. I think the main difference between the two is that the the TV lends itself more to depicting horror and fear, especially of Rick’s first moments in the hospital, than the stark black and white drawings of the comics.

Surprisingly for a horror series, the beginning theme isn’t fear or even horror per se. This introduction doesn’t dwell so much on the menace they face from the Walkers, so much as it concentrates on what they have lost. Even dodging the hordes of zombies in Atlanta, Rick is focused entirely on reuniting with Lori and Karl - or dealing with their loss. Around the camp fires the whole gang talks about their losses - Dale discusses his wife, Carol discusses her dead husband, Sophia misses her dead father, Andrea and Amy miss their old lives, Jim talks about losing his entire family in front of him. Even Allen and Donna talk about the life they left behind and Glenn talks about being estranged from his parents and the life he was leading. This is the defining theme of these first comics: loss.

And from that loss there’s also a secondary theme of coming to terms with it. There’s Morgan who is worried about squatting in someone’s house and the problem with stealing and looting from the police station - he continues to have this idea that things will return to normal, that the old rules still apply. Even Rick assumes that people will come back - he tells Morgan he will have to return the police car, that he can stay in the house but he better not fight to keep it when his neighbours return. There’s still that almost naive expectation that things will return to how they should be

One of the main conflicts of the comic is between Shane and Rick (beyond the foreshadowings of the romantic tension with the Shane/Lori/Rick love triangle) with Shane wanting to stay close to Atlanta because, when government help arrives, this is where they will come and how they will find them. Shane’s plans - or lack of them - are based on this increasingly foolish looking hope for order to be restored. It’s a really well maintained theme because we know, it’s already clear, that there is no hope of this happening but they cling to it desperately as a way of dealing with their loss.

One thing that has to be noted in comparison to the TV series is that, at this early stage, the racial diversity of the group is very small. Glenn is the only POC; the Martinez family, Jacqui and T-Dog in the TV series never existed in the comics (nor did the Dixons or Carol’s abusive husband). This leaves the cast much whiter. Add in the fact that we’re already seeing Glenn risking his life for supplies - and not even essential supplies, just for chocolate, detergent and toilet paper. And Lori is, selfishly, more than willing to risk Glenn’s life for the guns - but not Rick’s. Glenn is considered more disposable.

We do have a variety of backgrounds that are explored though - including the class divides between the different characters which are more overtly stated.

We have said more than once the The Walking Dead has a problem when it comes to gender, and this opening is a real problem. The women in this volume are limited to domestic roles - they wash the clothes and they care for the children. Donna even questions the unfair distribution of labour, but is overruled by Lori who makes her seem unreasonable - pointing out the men have experience with the guns while many of the men have never washed their own clothes (she even says Rick couldn’t do laundry with a washing machine!)

On the surface this seems reasonable - but only if you make some huge assumptions about the whole cast - and these must have been written in. They aren’t real people after all, but fictional creations. It is the writers who decided that none of the women - Amy, Andrea, Donna, Carol or Lori - had any outdoors or firearms experience. They couldn’t have one female character who was a soldier? A hunter? A cop? A gun enthusiast in the southern US? That was the writer’s choice. Similarly they couldn’t make one of the men - Rick, Shane, Jim, Dale, Allen inexperienced with a weapon? They all have firearms experience? All of them? And none of them can wash clothes? Really - none of them have ever washed their own clothes? And that’s making the huge assumption that washing clothes with a washing machine makes you remotely more capable of washing clothes in a river.

Or, frankly, that washing clothes in a river is such an arcane, complicated task that only experienced workers could do it.

Lori’s dismissive explanation doesn’t hold water - or if it does, it only works because of how the characters have been written along sexist lines.

Lori herself is a pretty horrible character so far - after a tearful reunion with Rick she spends much of the rest of these volumes arguing with him - wanting Rick to stay and send out Glenn for the guns and then fighting with him about Karl carrying a gun. The problem is that she is being cast as unreasonable and hectoring - a silly woman who needs overruling - in both cases. And in the latter case, she isn’t wrong. A different world or not, Lori has every reason to be concerned about a 7 year old carrying a gun, certainly until he’s had more experience. And even if she is wrong (and the comics make a point of proving her wrong in a blatant fashion very quickly), she also has every right to be seethingly pissed with Rick making this decision without even talking to her about it first. This is finished off with Dale deciding he wouldn’t “trust Shane around his wife”, unless he’s actively accusing Shane of rape, he’s acting like Lori has no choice in the matter at all or wouldn’t be able to help herself.

The crown on this is the actual fight. On the plus side, Rick does teach the women how to shoot (and Karl - but not Sophia) and we do see that Andrea has a talent. But when zombie hordes move in we see one woman pick up a gun - Lori. And she drops it. Andrea grieves, Carol cowers and Donna hides. Every single man - including Karl! - fights and kills zombies. The women are helpless, the men fight - and the men overtly protect them. Donna, Carol and Andrea don’t even try to draw guns (and don’t tell me they don’t have them - because if they don’t that means Rick considered it more important to arm a 7 year old boy than a fully grown woman).

It’s a bad start - rigid gender roles, a weak dismissal of a reasonable complaint about sexism and women as delicate, helpless flowers in need of protection by the menfolk.

This first volume sets the pace and opens the series - and it generally does a good job. A few issues to work on but the world is definitely laid out with some good strong hints of Rick as a leader for a reason - rather than him just assuming command Because.