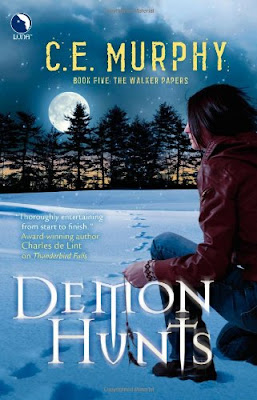 Joanne and Billy are now the woo-woo team – the pair with supernatural abilities who help with those cases that are just too weird for anyone else. So when people show up dying and partially eaten but without a scrap of any kind of forensic evidence on the bodies, it’s time to call them in.

But even magic can’t work miracles and there’s a limit to what even they can sense, much to their frustration. What they do learn is that their enemy is far more dangerous than they imagined and is going to take some… unorthodox messages to track and stop

Thankfully, Joanne is pretty good at unorthodox methods – as she proves not only to the people around her but also to Coyote, her mentor, finally free from a supernatural coma. In his absence Joanne has grown considerable and they have to refind their balance with what she’s learned, how she’s grown, the path she is on – and the fact they’re both in the real world, in the flesh.

It’s another fun mystery – with a lot evolved. The progression in how the police force treats Joanne and Billy has excellently developed through the series to Morrison now overtly recognising them as his woo-woo experts. The mystery itself is interesting and, while it is quickly solved in terms of “whodunnit” the how to stop it part of the story maintains some excellent tension and questions to keep the story going. The story is really well paced without any lags or moments of boredom, confusion, or vast leaps of logic. But the star of this book has to be the characterisations

I really love the introduction of Coyote, and I really thought I wouldn’t. I expected his presence to shake his mystique and it did. But it did it extremely well because it not only humanised him but helped Joanne to grow. Coyote is a person. He’s more knowledgeable than Joanne, in many ways more capable and Joanne and has powers and skills Joanne can’t touch.

But he is a person and he isn’t god. There are areas where Joanne is better suited than him, there are areas where Joanne is more powerful than him and there are things she can do which he cannot. And him showing up didn’t turn this into a story that focuses on Coyote, Joanne is still the protagonist, she is still the one investigating, she is still the one in charge and the one who makes the decision in her city and her life. I liked that it made it really clear that they can be powerful in different ways and walk different path. That Coyote, healer, teacher, advisor has far greater strengths in those areas – but Joanne doesn’t have to follow the same way; she’s a warrior, a defender, a soldier who heals things and makes things better in her own way. I liked that he had his precious philosophy that was truly valuable to him – but at the same time it was acknowledge he could have that and not need Joanne to follow it.


To me this is especially important given how much Joanne has grown and learned over the last few books. She needs a mentor, not a boss and not a character to remind her how much she doesn’t know, how new she is and how weak she is. After what she has achieved in the series, she has proved her worth and her capability even if she has made mistakes and caused problems in the past, she has also gone on to fix them. She needs a peer, not a school teacher and it was really well written to give her that.

Another element that impressed me was the emphasis on Joanne being a healer - even while she’s a warrior and even while hunting a “monster.” There is always a willingness to be sympathetic to the enemy even while being prepared to kick its arse and stab it until it stops moving. Even while knowing it has to be stopped, Joanne can still sympathise with the pain the Wendigo feels

Also we have a Wendigo which is actually a Wendigo which has at least a nod to the actual legends of a Wendigo rather than just being a fancy werewolf you have to kill with fire as we see so much in this genre. There was some depth behind it. This is something this series does well – the creatures, the realms, the legends have had some research behind them, there’s some work to present the legends as they actually were, their beliefs as they are actually held and not just raid random cultures for any spare monsters they have around. It’s detailed, it’s deep and it’s fascinating. However, I still have a minor complaint that it’s also damn confusing at times. The writing can become very abstract, very confused and very lost especially as Joanne travels from realm to realm to realm. It’s a lot tighter than it has been in previous books and it’s a definite improvement but it is still an issue.

The Walker Papers have some of my favourite characters in the genre. Joanne herself has a lot of depth from her mixed heritage, rather than it being there of convenient woo-woo (though it is a constant source of the latter). She recognises her conflict outsider feeling with her mother’s Irish family and her father’s Native American family (it’s neatly done in one line – who she always thought of herself as deathly pale compared to her father’s family but going to her mother’s funeral she realised how much darker she was than her relatives). She has steadily grown and grown to accept both elements of her heritage and marrying them together without running from both as she had – even down to her very name; changing Siobahn Walkingstick to Joanne Walker.

The men around her can act sexist – either being jealous over her or being protective and in response to that you get this line:

That combination of her utterly rejecting their paternalistic crap while at the same time not running off to do it all alone to show how big and tough she is is perfectly balanced. She’s not super woman, but she’s not weaker because she’s a woman, she can’t do everything on her own, but that doesn’t mean she needs people to do things for her. She is human enough to be confused by her conflicting attraction between Morrison and Coyote, but not fool enough to let a love triangle develop – nor does she allow sexual attraction to destroy any pretence of good sense. She is determined enough to tell Morrison she has to give him an ultimatum, but apologetic in recognising he is her boss (and there’s nothing wrong with him being her boss) and she’s putting him in an impossible position – and she drags Coyote out on the carpet for locking horns with Morrison to try and prove whose boss or who has “ownership” of her. It grows excellently through the book as she goes from uncertainty with Coyote’s presence then mild resentment before asserting her own strength.

She does need some more female friends though. Again this book kind of emphasised that with her running around with Billy, Coyote and Gary. Especially with her reconnecting with an old, highschool female friend and them having an almost instant hate reaction, completer with old, childish grudges and lots of jealousy and Laurie Corvallis who is a constant thorn in Joanne’s side (albeit one who is redeemed). However we are seeing more and more of Melinda in her life adding a strong, centred, loving, powerful female figure who is awesome in her own right.

Which brings us to POC of which there are a number – Coyote, Melinda and Joanne herself as well as Laurie Corvallis. A number of these have woo-woo of course – but then she also knows Billy who is psychic and another White medium and even Gary is a powerful spiritual centre for her. Most of the characters have woo-woo.  The only thing which, I think, kind of makes the woo-woo different is that Billy and his medium friend have woo-woo, they just do. Melinda’s woo-woo is connected to her Bruja grandmother and Coyote’s and Joanne’s to their heritages. They all have woo-woo but the woo-woo of the POC feels more connected to their ancestry rather than “it just is”. Still, in general they’re portrayals that aren’t rammed with stereotypes we see so often and make up a substantial part of the story

All of the characters interact well and in a really human manner – from Melinda’s powerful love of family, to Billy’s balance and strength and fun to Morrison’s conflicted acceptance of woo-woo through to Gary being just this awesome figure behind everything, solid and strong and excellently supportive – they’re all really well written and humanised.

I loved this book and I think, as a series, it’s also artfully balanced. In the last book Joanne was getting over the last of the mistakes she has made and setting off more on her own and more openly embracing her full self as well as embarking on the dire meta enemy that has been hinted at. And this is the book that almost formally puts it into practice – Joanne is now out there asserting her strength, her power and her leadership. This book is, in many ways, Joanne’s graduation and a good sign for more to come.

(Also I have a geeky fanboy love of 2 fake FBI agents with the 1967 Impala with Kansas License plates. And one of the agents was “really tall” and the other “really cute”.  Sneaky Supernatural cameo, I love it)