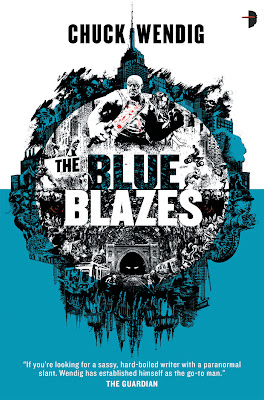 Mookie Pearl is a thug. He knows he’s a thug. He has always been a thug, working for the Organisation to ensure the supply of Blue – the mystical substance that brings an incredible high but also opens your eyes to the real… things out there – keeps flowing while the denizens of the underworld remain down where they are.

It’s a hard life and not a happy life – not getting easier or happier with his daughter makes a play against the very Organisation he works for; and organised crime isn’t kind to those who mess with it.

Her upsetting things is adding to more trouble – the boss is getting old, his heir isn’t ready to take over, there are new players in town and there are things stirring in the depths – among the snakemen and the goblins and the dead that walk.

This book is, perhaps, the hardest review I've ever written.

Because so much of this book is stunning. The writing is a true work of art. The structure, the description, the sentence length, the word choice all telling as much about the scene as much as the actual description. I’ve rarely seen writing that is so expertly crafted

And the theme and setting come through extremely well. The grittiness, the grimness are all well portrayed. The land without laws or order, where life is cheap, the sense that anyone could die at any time, nothing is pretty or shiny or beautiful and no-one can really be trusted. The otherness of the underworld, of the down below, how dark and terrifying and alien the underworld is. The weird eye opening power of the Cerulean. Even the surreal violence of the gangs and their odd themes and looks. All of the themes are excellently maintained to give a powerful atmosphere you rarely if ever find in books.

And the world is incredibly well designed. The underworld, the dark places under New York filled with layers and layers of creatures and monsters, creatures from the dark infiltrating to the surface, the different supernatural Pigments, a version of undeath that is deeply horrific – in fact a version of everything that is deeply horrific. In a genre where a lot of staples of horror movies are made into friendly sexy people, it’s interesting to see a book where just about everything is a monster, everything is horrific and no-one is truly good.

The whole premise of the world is an underworld – both literally and figuratively. The monsters of the dark rub shoulders with those who lurk in the corners of humanity’s own underworld. After all who is more likely to come into contact to the hidden monster’s in the deeps? It won’t be the wealthy and privileged in their penthouses and mansions. It’s the poorest, the homeless, the addicts, the people forced to seek shelter in the corners and the shadows, the underground and the underworld. And, of course the criminals, the organised criminals and the gangs who are forced to organise more in the face of threats – and opportunities with the drug cerulean – from the depths. With that you can see the bleed over of culture back and further, how the gangs are just a bit stranger than they are elsewhere and how the Organisation has had to be a little more organised than most syndicates in the face of the threat. Ironically, while there are some legitimate interests in the cities who delve into the darkness, it is often the criminal element that stands as the line of defence between the underworld and the civilised world up top. It’s a really interesting and different premise I’ve never seen represented in quite this way – certainly never so darkly, because the organised crime may be the last line of defence for humanity, but they are still organised criminals. They are still thugs running protection rackets and selling drugs and enslaving addicts

The very nature of enemy’s plot, when fully revealed is something that is both horrifying and imaginable – epic on a scale of the most cartoonish of supervillains but with a dire realism and a fully implementable capability that adds a horrifying reality to the fantastic. And yes, as they progress on this story people die – horrifically quite often. People get badly injured. This isn’t a fluffy book where people recover or healing magic patches people up nor is it a book where no-one dies. There are often losses and pain and brutal executions and a need to get up and keep going.

Which brings us to the characters. they’re all extremely real – not necessarily human, far from that, but definitely real. From Nora with her epic daddy issues, to Skelly (who is several kinds of fun) to relatively minor characters like the Burned man and Werth the goat and Karyn the butcher are all real characters with real motivations and thoughts and goals and motives. Frequently dark and menacing motives, definitely skewed motives in the dark and evil world they live in –but still their own motives and their own lives

Then there’s Mookie. Some protagonists are handsome, dashing warriors. Mookie isn’t. He’s a thug. He’s a drug dealer. He runs teams of exploited addicts. He’s huge, he’s a fighter and a grizzled veteran of more fights in the Deep Dark than anyone can imagine – and it shows. He’s muscled and huge and covered in scars and several kinds of ugly. He gets injured and keeps on going, he smashes things with fists like boulders. He isn’t a wit, most people think him stupid and he’s far from anything close to an idealist. His world is bleak, he knows he’s made mistakes and he knows that there isn’t a great future ahead of him, only a few simple pleasures he indulges in – but he tries to be loyal and he’s desperate to make some things up, especially with Nora. He’s not a good man but he tries to be when he is able – especially with his own family. He throws himself into the story with a berserker’s rage and passion, trying to understand the world as it shifts but ultimately fighting his way through it, bouncing from event to event and trying to hold things together.

There’s also some inclusion – while we have lot of monsters of no distinguishable origin, there’s also a lot of humans lurking in and around the shadows of this vast world who are definitely POC, it’s not an all white universe or New York by any stretch. We also have a couple of lesbian characters (and an unfortunate dead gay trope – but we have a fair few bodies on the ground here). I won’t say any of these characters have anything approaching a major role, but they are there in the background. It’s not a lot but it is there and it is better than many.

Aaaand, I didn’t like it. Not even a little. The writing, while wonderfully well crafted, was also very long which felt very drawn out. And the story was grim. Grim girm grim. Grimmer than Grim. It was grim and gritty and grim and dark and I didn’t like it. I feel shallow and twee for saying this, but it was pretty unrelenting even with a semi-HEA (and, really, by “Happily ever after” I mean “pretty tragic ending that only looks happy because of the grimness that precedes it”).

Normally I am quite happy to hate a book and tell you why. But this is one of those rare occasions where I feel like I am completely and utterly wrong for hating a book. We had to check with each other to confirm that we both disliked it. With the incredible writing and the incredible world and the incredible creativity and the powerful theme et al that have gone into making this book I feel almost required to like it. By disliking it, I feel like someone has offered me fine caviar but I’m sat in a corner happy with a big bag of pork rinds. I feel like I’m sat in the Louvre, ignoring the Mona Lisa and reading comics instead. I expect people to judge and look down their nose at me while I utter weak excuses like “it was too dark!” and make it seem like I want to watch Disney movies.

Yet – I didn’t like it. I struggled to finish it. It was more a sense of self-guilt than desire to read that kept me to the end. I couldn’t get into it. I was constantly forcing myself to read –bribing myself to read, even – 20 more pages and there will be Baileys kind of bribes.

Which is a shame, especially since I recognise the objective quality of this book – but it didn’t work for me – for either of us for that matter. But were going to put this down to a matter of taste than quality

With that we’re giving it 2.5 fangs. Our “average” rating, with a strong caveat that for some of us, this is a DNF book, yet there will definitely be a lot of people out there who will give it a full 5 fangs and justifiably so.

(with some major qualifiers)

A copy of this book was received from Netgalley
Posted by Sparky at 3:00 PM