Lunatic Fringe (Tales of the Pack #1) by Allison Moon 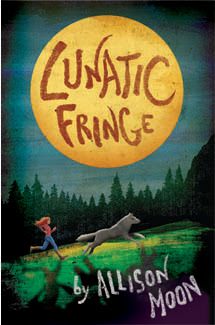 Lexie is going away to college – though laden with self-doubt and insecurities as well as a whole lot of questions as to exactly what she’s doing and what she wants to be.

But college is a place where she can learn – and far more than she realised. She can learn about the world, form some solid friendships, fall in love, truly discover her sexuality and find out who she is

She also finds out a whole lot about werewolves. And werewolf hunters. And loving werewolves and how things are rarely as simple as they appear.

I had real problems getting into this book. It’s very descriptive and overwritten and tends to ramble around in places. I think it’s trying to be evocative to carry the full power or emotion of a moment or the scale of various feelings or new concepts, but instead it kind of rambled. I think part of the problem was that, with the title and the blurb, I knew we were going to be dealing with werewolves. It’s one of the problems with any “big reveal” book. The cover/title/blurb/pre-amble/author’s introduction tells you a book is about werewolves (or vampires or angels or whatever) then you spend half of the book playing coy until the ZOMG WEREWOLVES moment that we all knew was coming. It’s hard to pull off in a way that doesn’t leave the reader bored.

Lexie herself isn’t a bad character per se, she’s very much what she is, a small town young woman with very limited experience and fewer social skills and even less confidence, going off to college to find herself, learn more about who she is and what she wants to do.

But those stories end with someone who finds themselves, learns more about themselves and what she wants to do – and I’m not sure Lexie ever does that, despite at the end of the book her refusing to go travelling. And throughout the book she’s a very passive actor in her own story, taken to things, nudged towards things and constantly, constantly running from things. I don’t think that ever really changes.

What could have been a fascinating element of this book is the world itself – the werewolf packs, the different kinds of werewolves, the peacespeakers and what they mean (hopefully beyond some vague references to Native Americans), their history and the conflict between the packs. But it didn’t work for me because so little of it was explored. We had a few lectures from Archer, some speeches by Blythe that I’m not sure we can believe and Archer’s own internal angst. I think I could have loved this world, but as it is I stand a little confused and feeling like I just didn’t quite get it all. It needed more development and exploration.

The romance is unique in that it’s between 2 women – and heartfelt and powerful as many romances in paranormal romance. But we do have the falling in love awfully quickly trope, we have the conflict that I can’t entirely agree with trope (Lexie becomes angry with Archer for killing people pointing guns at her) and we have the virgin introduced to relatively advanced sex techniques and it all going swimmingly. They’re standard tropes though and I have seen them done far worse elsewhere.

This book established itself as really tiresome to me before it hit the 40% mark – because it devolved into a series of lectures and PSAs. Far be it from us, at Fangs, to be resistant to social justice themes in books – far from it, we’d love to see more. But there’s a difference between having social justice themes and messages and having your characters recite text books and sound bites to each other. It wasn’t naturally incorporated, it didn’t flow – it was clumsy and clunky, it was didactic, it felt like the author has ripped out pages from a sociology and women’s study text book, with a side order of remedial queer theory and glued them in.

I’m not sure what it was to achieve either. People unfamiliar with the concepts are going to be put off by the blatant lecturing. People who are familiar with the theme and concepts are going to be irritated by its clumsiness and it’s extreme – even insulting – simplicity. Like deciding the only reason people may not be happy with identifying as feminists is because of the denigrations of chauvinists, ignoring the problems people have had with the feminist movement and the rise of womanism. Or dismissing labels as binary and patriarchal and inherently wrong – even saying calling oneself a lesbian is “limiting”(which is pretty damn homophobic), which not only completely ignores the strength and power many minorities get from their choice of labels, their identities, their reclaiming, their proclamations of self. The author seems to have a very narrow view on how marginalised people should think, feel and identify and has created a world which puts that on a pedestal in a way that marginalises and attacks women and GBLTQ people who don’t conform to the author’s lens.

I’m also rather bemused by the whole depiction of the lesbian feminist Pack. I mean, during the many many many lectures there’s a note that, no, feminists aren’t all rabid man-haters and that is a ridiculous straw man. This is good. And then we have the pack of lesbian feminists who… hate all men. And we’re not just talking the legitimate anger of an oppressed group – because I can get behind a good rant; because it’s not emotive. I wondered if it was supposed to be a reflection  of Blythe and her wrongheadedness but it’s common throughout the Pack. Renee, for one, gets extremely annoyed because Lexie has a conversation with a man.

What is this supposed to be? Are they supposed to be straw-feminists for us to recognise as such? But where’s the counter of actual feminists? These are the feminist depictions of this book and there’s no indication they’re wrong or parodies. Sadly even some of the strongest little dumps in the book are undermined by them – like there’s a pretty great scene where Renee emphasises to Lexie that it’s ok to say no, that “no” needs no justifications or excuses and if she doesn’t want to do something. This is excellent – but Lexie’s there thinking that she actually wants to say yes but she’s too shy and doesn’t have the confidence to do so and if you’d just shut up telling her she’s allowed to say no, she’s appreciate more encouragement to say yes. An awesome message of consent becomes, because of context, twisted instead into a “the shy girl needs friends to push her past her comfort zone”

And I am further bemused at the whole attempt to present gender identity. We have 2 people (1 present and 1 referred to) who are generally considered women but who don’t dress or present in a “feminine” fashion. In both cases Lexie decides the male pronoun is more appropriate for them – even when she talks to Mitch she doesn’t say “hey what pronoun do you prefer?” (which would still be odd since she doesn’t ask anyone else – which is another really limited way to look at gender presentation: only the really “butch” women may prefer different pronouns, the more “feminine” looking ones will never find that relevant to them!) she tells Mitch that “him” seems more appropriate to Lexie. And then Blythe makes her own pronouncement on Mitch’s preferred pronouns. Is anyone going to ask? Not “hey I want to call you ‘he’ is that ok?” but actually ask what Mitch prefers? Being open to people of different genders in different bodies is a nice step but it’s hardly ideal if you then decide to assign them genders based on your opinion of what they look like. Similarly, I’m unimpressed by Lexie’s apparent ability to detect gay men by sight (which must be based on base stereotyping).

A number of the women in this book were POC and Lexie herself is part Cree. None of them particularly follow any stereotypes or typical tropes and several of them do take major or fairly major roles in the story. The only particular complaint I have is there’s a level of Native American mysticism going on but also that the POC are more likely to have their skin colour and hair described, especially in relatively long winded ways in terms of shade and comparing their skin colours to various shades of tree. It contrasts with the White characters in scope and scale.

In all, I’ve read worse books. But this book is trying too hard to pass a message and a lesson yet at the same time doing a really dubious job of passing on that message. So the plot is derailed and distracted by these Aesops which, in turn, don’t really adequately convey what I think is trying to be conveyed. The whole thing feels clumsy – the relationship, the world building and the messages.