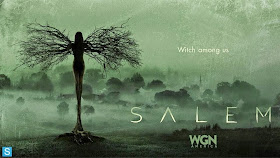 Increase finds Mab’s body and isn’t best pleased. He carries her body to the scaffold yelling his sermon loudly to the whole town to encourage a crowd to gather. He hangs her body from the scaffold and turns her to display her to everyone before breaking her neck.

Mary joins Increase for breakfast to thank him so sincerely for saving her husband but things grow tense quickly – he insists George has been spelled and by someone close to home. And he refuses to let her bring her husband home. As a compromise she insists that Isaac attend to George.

Unfortunately for Mary, Increase is far too well known and powerful just to kill him off without questions being asked (Mercy’s suggestion). And Mercy’s dad shows up to talk to Mercy – Mary sends Mercy away and accuses her dad (the reverend) of exorcism, abuse and more of his daughter sealing it with a firm “Mercy is mine.”

Mary goes home and, faced with the Elder witches questioning her and the threat of George waking, she has a huge break down and smashes around the room rather dramatically. Somewhat composed she sees Isaac who is being called in to care for George. She tells Isaac how terrible Increase is taking complete control and begs him to give George a tonic

Isaac isn’t a big fan of increase anyway, certainly not when he decides to tell Isaac what a wonderful blessing being branded and called a fornicator is and how divine the whole thing is. He tries to break Isaac from Mary (the only person who is ever kind to him) and explore the big wide world. In return for seeing the big outside world he has to keep George clean (a task they both consider distasteful) and alert Increase when George finally wakes. The room is also warded against witchcraft (is warding against witchcraft using the ashes of the dead somehow not witchcraft itself?)

John finds Cotton being all miserable and hungover in the graveyard but has brought Anne along so he and she can bond over their mutual daddy issues. They take him home and Anne recruits John to patch up the orphanage and telling the story of one orphan who doesn’t talk after his parents were killed by Native Americans. I predicate a trite “oh look hasn’t talked for years but John manages it in 3 days” storyline. (Which would be fun if Increase then yelled “witch” over it).

Tituba has a moment of not serving people to teach Mercy instead – showing Mercy her tarantula familiar and the witches mark on her neck that it feeds from. Mary, meanwhile runs into a medium pack of Salem young women who are all going to meet Mercy – she seems to have built up quite a cult. Mary is on her way to the Elder meeting so they can be sad about the death of Mab and she can answer questions over the death of Rose. Mary shows them the Malum and reveals Rose’s plot – she also offers to give them the Malum “the one tool that can control her.” They let her take it back with her – they don’t need it to control her. Ooooh touché.

John and Mary have another tense relationship moment with shades of jealousy of Anne and confusion as to why Mary would want her husband back – made slightly more interesting by John being shirtless. Cotton goes to the brothel to find some of Gloriana’s clothes to smell – it actually looks much more tragic and touching than utterly creepy, honest.

Increase decides to go to him and confess he never loved Cotton’s mother but baby Cotton showed him love. I think this is actually his attempt to show pity and sympathy with his son (in between justifications for hanging up a dead body). His sympathy ends with telling Cotton to pull himself together.

At the Sibley household, Tituba points out a vast hole in Mercy’s education – she thinks every problem can be solved with murder. She now wants to murder George. Mercy is so enamoured with Mary’s power that she doesn’t realise her weakness – Mary’s power over the town is in part conveyed by being married to George. A widow does not have that authority. The plan now is to destroy George’s mind from the inside. As Mercy keeps asking questions and Tituba tries to quiet her they squabble and Mary kicks them both out

In the hallway Tituba threatens Mercy, she has waited years and won’t have Mercy getting in her way.

Isaac does dose George though he is torn – he doesn’t know why George would call for Increase rather than Mary, the wife who doted on him. Nor does he see why he should care for George who treated him so appallingly.

Mary enters George’s dreams and it doesn’t go well – Increase has protected George’s mind. When Mary wakes it’s to argue with Tituba because Tituba wants to raise the problem of Mercy when Mary thinks it’s a distraction. She is disappointed with Tituba for not putting Mary’s plight front and centre. Tituba protests she’s done everything for Mary, loved her – and Mary wishes she didn’t love her and curtly orders her to find a way to George.

At the orphanage the silent orphan, Stephen, talks. Of course he does. Because deep seated trauma is easily overcome by a day of DIY with the protagonist. 2 years of silence and one day. Really. Hopkins, the town drunk, staggers past to demand to see his daughter, Emily, wherever she is

She’s at the graveyard getting ready to play witch with Mercy (and her new, bossy, second in command) when Anne finds them. She tells Emily about her father demanding to see her; she offers Emily the chance to stay in the orphanage since her father is drunk. Mercy shows up – confident, dangerous Mercy – and says Emily is safe with them, and offers Anne chance to join them. She refuses.

Things grow more complex when Increase sees Isaac with the tonic. Isaac tries to lie which doesn’t work. Increase mocks and scorns Isaac before getting on with the hitting and questioning while Tituba’s familiar crawls through the rafters. It crawls into George’s mouth as Isaac confesses Mrs. Sibley gave Isaac the tonic. When he kicks Isaac out he hears George choking, when he looks in George’s mouth, there is a golden spider web blocking his throat.

Mercy’s coven plays with levitation and Emily goes back to her father and defies him. He beats her to the ground, repeatedly hitting and kicking her until the coven arrives in their nightclothes. They circle him and hit him, apparently strong enough to rip him limb from limb with their bare hands. Emily smiles.

Anne and John are walking the street when they see Increase storm out demanding the Selectmen be gathered because he’s found another witch. With a crowd forming he calls Mary into the street to reveal that George is awake. He accuses the tonic she gave as being responsible for the golden web. Mary steps forwards, takes the tonic and drinks it and repeats “a tonic for pain, nothing more.” Cotton arrives to point out that a web of silence is probably more due to a spider familiar from a real witch, not dear Mary. Increase still wants to search Mary’s house

Mercy runs forwards to speak on Mary’s behalf, how kind and benevolent she is – and she throws Tituba to the wolves, revealing she is the one with the Spider familiar and the witch mark she has. Tituba is arrested, Mary is silent.

Mary brings another interesting element to the continued depiction of the oppression women faced in this time. For a long time she has been the woman the other woman have looked to as the powerful in the town. Anne and her mother look at Mary Sibley as a woman who has managed to find a voice. Mercy puts Mary on a pedestal because of her great power. But ultimately, Mary is not just subject to the limitations of the elder witches (and the plotting of Hale, at least part of which is motivated by Mary being female) but all of her temporal power rests on her being married to George and George being helpless. The only power mainstream society in Salem affords her is through her marriage and that is only possibly to exercise because Mary used magic to silence George. These reminds really underpin the whole reason for witchcraft in this series, these women have taken the only avenue to power and agency available to them.

Then there’s Tituba – who doesn’t have power even in this system and it’s shown much more poorly because there’s no reason why Tituba couldn’t have power and influence among the witches. She taught Mary, she inducted Mary into witchcraft they have worked together for years. There is no reason why within this she wouldn’t treat Tituba as an equal. There’s no reason why Tituba would feel legitimately threatened by Mercy for Mary’s attention – Tituba shouldn’t have to be begging for Mary’s attention or banished from the room. She shouldn’t be a victim of Mary’s scorn. She shouldn’t even be subservient to Mary. Just as the White women have used witchcraft to overcome the constrains of society, why cannot Tituba? Why do those same constrains exist within witchcraft as well?

As to Isaac, he's an interesting one. He has been abused by Salem's system as well and has no love for the systems of power. He feels loyalty to Mary because of her kindness when so few will grant it. At the same time he has to realise something is up with Mary - she's up to something and he may even suspect her of being a witch. But because he's convinced of her goodness then whatever she is up to must good. And does that preclude hurting George? No, he has his own grievances against George and the town. He even asks "do we deserve to be saved?" I have to wonder, as another abused victim of the Salem Puritans, would he condemn Mary if he knew she was a witch?