Salem, Season One, Episode Six: The Red Rose and the Briar 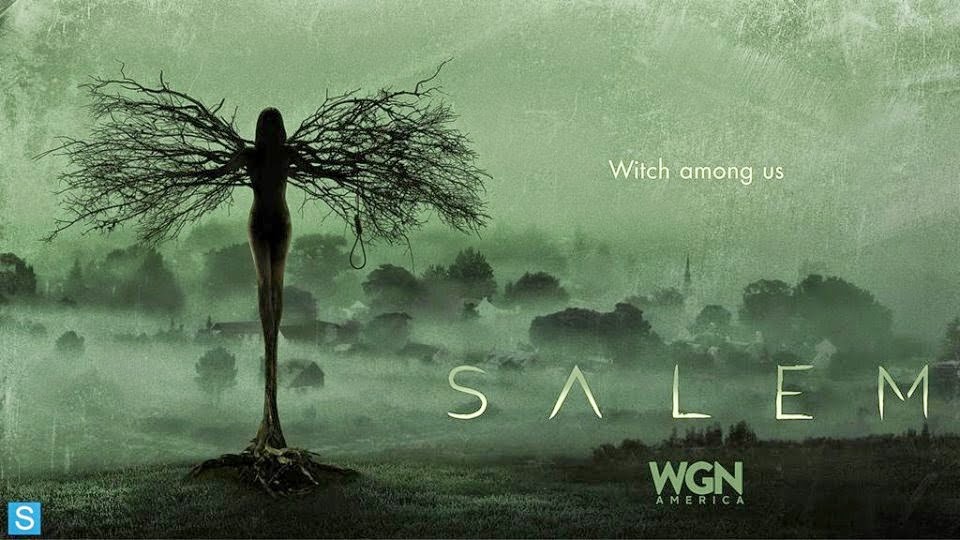 A drunk Cotton consults the stars firm in the belief that if he can interrogate the witch in a precise spot, she will be unable to lie.  He hands Alden a hypodermic needle filled with a paralytic to control the witch.  They head down to the cellar and the witch taunts them but they grab her.  She turns herself into Cotton's mother and then taunts Cotton saying that his mother is the devil's favourite whore.  In frustration, Cotton injects her without looking for a vein.

Mercy is feasting and Tituba looks on disdain.  She asks when Mary plans to kill her but Mary points out that she was a dirty little creature when they first met.  Mary orders Mercy's clothing burned.

Cotton and Alden march through the streets and Cotton blathers about the witch. At the Sibley's Mary shows Mercy how she shaves Mr. Sibley.  Alone, Mercy admires Mary's jewelry and Mary advises that the hard part is not getting what you want but knowing what you want. Mercy says that she wants to be like Mary.  Mary offers Mercy a book but it seems that her father believed there was no reason for a girl to read and that his plan was to find a man to read her the bible as that apparently is the only book worth reading. Mary says that her God likes them to read for themselves and offers to teach Mercy to read one day.  Mary then starts to tell the story of the Queen of the Night. Of course, the story that she tells is about herself and how after believing Alden dead, Tituba brought her to George's home. It seems that it was Hale who poisoned George's first wife to dead, leaving an opportunity for Mary to marry George.  As Mary tells this story, Mary holds a razor above Mercy.   She talks about throwing up after having sex with George and how it taught her to be careful what she wished for.  Apparently she was married to George for two years when she begged to be released but she was refused because the witches believed that Salem would go on to be one of the most powerful cities in the New World.  That night she initiated a sex game with George involving Tituba and purposefully got him drunk before forcing a toad down his throat.  From then of course George was docile, leaving Mary in control.

Mercy wakes and finds that she is no longer in the Sibley home but in the woods.  A panicked Mercy promises never to say that Mary is a witch.  When Mercy sees the blade in Mary's hand, she takes off running. Mercy runs screaming and Mary slowly stalks her never increasing her pace.

In another area of the woods Cotton hears the scream but dismisses it as the sound of an owl.  How or why is beyond me because it so clearly sounded like a human scream. Cotton reveals that they will only have a short moment to question the witch and then they must kill her before the paralytic wears off.  A drunk Cotton pulls out a sword saying that he fenced at school.

Tituba heads to see the magistrate where she learns that a witch is missing. Anne questions her mother about why the Magistrate would be meeting with Tituba.

Mercy continues to run ad stumble through the woods as Mary stalks her.  Mary finally catches Mercy and cuts off her clothing.  A naked Mercy sits on the ground and Mary demands that Mercy say that this is what she wants.

The sun has fallen as Cotton and Alden arrive at the chosen spot in the woods.  Alden snarks about how unpleasant the locale is.  As they work on suspending Rose from a tree, they don't realise they are being watched.  Rose tries to fight back and they realise the paralytic is wearing off. Rose cackles and threatens that the darkness will eat Cotton and Alden as she is hung from the tree. When Roe begins to talk about Mary, Alden grabs a sword but Cotton stops him.

Tituba has gone to see Petrus and says that Rose is missing and must be in his wood.  Petrus declares that he has not seen Rose but did see a witch in the woods tonight.  Petrus again taunts Tituba about teaching Mary everything and so Tituba reminds him that he must remember whose site he is on.

Cotton asks about the grand right and Rose says that it is death to stop him from all that he will do.  Rose admits that innocent blood flows but Cotton argues that no innocent blood has flowed and that there are no missing children.  Rose asks Cotton if he is hurting and then escapes from her bindings.  Rose then pierces her wrists allowing her blood to flow and cover the ground ad Cotton and Alden.  Dead creatures rise from the earth and grab Cotton and Alden.

Rose makes her ways through the woods and is met by Mary.  It seems that Rose was Mary's mentor. Mary questions why Rose brought the Mallum to Salem and Mary says that she did so because Mary still loves John Alden and that she couldn't take the chance. Mary reveals that it was she who made George send Alden away in the first place. Mary asks how Rose ended up in the woods and Rose claims that she allowed herself to be captured and interrogated to find out what is in Alden's heart. Rose says that even after everything John still loves Mary and always will.  Rose says that she needs Mary's heart broken and nothing does that better than death.

In another area of the woods, Cotton and Alden continue to fight off the zombies Rose raised.

Rose tells Mary that she saved Salem the trouble of killing Alden and Cotton.  What Rose doesn't realise is that through all of this, Mercy was standing behind her. Mary says that they have a new sister and Mercy slices off Rose's head.

Cotton and Alden have crawled out of the woods and Alden is not pleased with the answers they got from Rose.  Cotton says that they don't have to worry about Rose showing up in Salem again because she would go straight to the noose.  They have a moment where they talk about what they admire about each other.

Mary is making her way through Salem where she meets Alden and Cotton returning.  Cotton explains that they were tracking Saturn but say nothing about Rose. Cotton excuses himself leaving Mary and Alden alone. Mary questions what they were really doing and John offers to walk her home.

Tituba is scrubbing Mercy but tells her that she is nothing more than a tool.  Tituba makes it clear that Mary is hers.  Mary arrives and snarks about getting there in time to save Mercy.  Tituba says that Mary lost her resolve and that is why Mercy is still alive.  Mary says that Mercy cannot reveal her for a witch now that she has become one herself.  Tituba leaves and Mary stays to finish washing Mercy. Mary promises that Mercy will never face hell again alone, as she slips a golden thimble upon her finger.

Ann is in her room when she hears a sound in the house.  Ann goes to investigate and calls for her father as a door mysteriously opens. Ann approaches a figure but when she touches it, the figure collapses is.  When Ann turns she finds her mother who says that it's time they talk about her father.

Mercy may be the one storyline in Salem that I’m actually interested in. her story, more than anyone else’s, really emphasises just how little power the average woman had at this time. Not only has she suffered incredible abuse and vicitmisation, but her friends all commonly face abuse, a complete lack of anything resembling agency, and cruelty. They are toys, pets and tools to be used by their fathers until they are thrown into a marriage whether they want to or not. Is it any surprise that Mercy then seeks a way to power, however it is? Is it any surprise that witchcraft is such a temptation to her? Especially when she sees Mary – the one woman in Salem who has so much power.

And to contrast all that power we have Tituba. The one POC on this show, the woman who apparently taught and inducted Mary into witchcraft – but is she treated as a mentor? No, she doesn’t even get the respect that the decapitated Rose did. She is not respected for her powers (even when her magic is unique and vital) nor does Mary regard her as any kind of authority. Tituba is a servant, a slave, a tool to be directed and ordered, who has to account for her movements – whose position is so fragile she is actually jealous of Mercy for fear of having to compete for her mistress’s attention! Tituba as an actual devil worshipping evil witch corrupting the white lady was always going to be deeply problematic and outright racist – but even within that format the story has continues to take the worst possible path in her portrayal.