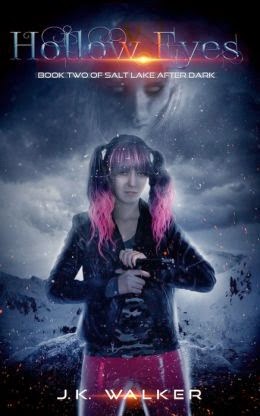 Jazz is embracing her role as the supernatural’s trouble shooter – and the city’s homeless population being preyed upon definitely counts as a problem for her to fix.  Finding out who is responsible and making them stop definitely adds a complication to the holiday season.

A complicated situation that isn’t made any easier by a berserker arriving in town determined to force one of her friends to fight – and he’s willing to target Jazz to force AJ into the ring.

I don’t know how much time has passed between this book and the first in the series, it doesn’t expressly say and it doesn’t need to. The development of the characters alone has created the sense of time without having to expressly spell it out – it’s very neatly done.

Especially with Jasmine. Jazz has transitioned excellent from the first book to her new role as the Council’s trouble shooter. She didn’t ask for it. She may not even like it – but she does take it seriously and I like that. Sure it wasn’t a role she sought out but she recognises it as a role that’s important and a role that comes with a lot of responsibility. Linked into that is her own strength and confidence and desire to prove herself. Does this mean she always makes great decisions? No, she’s driven to solve the problem in the book and she’s determined to do it herself with relatively little help. But, unlike so many reckless Urban Fantasy characters, Jazz actually sells this. She’s driven to solve this because it’s her job, her responsibility and through that her place in the supernatural community. More, it’s her role given by the leaders of that community very quickly because they respected her abilities. She can’t let someone else take it over without implying they were wrong (even if any sensible person would and the Council won’t hold it against her). There’s this ongoing message from Jazz that started in the last short story – this is her job, she takes it seriously and this is what she has to do. Not because she’s the chosen one or the only one with the special woo-woo or anything else (in fact, there are moments where it’s expressly made clear Jazz isn’t the strongest of them all, not even close) – but it’s her job, her role, her responsibility. It’s not pride, or not pride in the arrogant sense or over-confidence – it’s responsibility and duty that drive Jazz as well as a deep well of compassion.

I also like that she’s a female character, in this genre, who is most strongly defined by her female friends. She has a close circle of excellent, close female friends she relies on, she spends time with (and that’s social time – not just “hey I need something, come help”) that is growing if anything. They’re a far more dominant and powerful part of her life than her male friends and even than her love interest (who still needs to drop the awful Cajun accent).

Other good development comes from Mitchell, the hard-ass werewolf leader who is always so abrasive and controlling. I initially thought we were looking at a wannabe dictator but he has a lot more nuance than that. Yes he’s controlling and arrogant, but he also legitimately cares about the community – all the supernaturals – quite possibly more so than any other leader. In fact, he may be the only leader who can or who wants to take point and help the community as a whole – the head witch we haven’t seen much of, head vampire Victoria is doing her level best not to be the Supreme Queen of the area, which is hard because she’s the biggest, baddest thing in town. The werecats are few in number and too independent. Who else but Mitchell can lead? Like Jazz, responsibility seems to drive him. It’s really nice to see that develop alongside her – and alongside Victoria who seems mixed between being friendly and terrifying and in a really awesome

I love the world building and the little tweaks we have – like how different shapeshifters have different characteristics (the big cats are stronger, the wolves have better stamina), trying to find enough food for the were-metabolism without breaking the student bank. Or the Council setting up a fund that is nearly all paid by the vampires (who are by far the wealthiest) but the others contribute to to try and escape the fear of the vampires taking over.

I really liked the A-plot (even if it ended with one of my pet hates, it was actually well done with actual research and development and even involvement of the group in question rather than going for the very clichéd and clumsy handling I’ve seen so often in the genre – and yes, I’m being cagey for the sake of spoilers) since it really did show Jazz, the world and all these characters off awesomely and was a pretty decent storyline

The B-plot with the random fight ring? That felt kind of unnecessary and think it was largely a means to push AJ more into the story than anything else. I didn’t dislike it – I just didn’t think it was necessary or added anything special to the story.

This book – and series – does have some very solid diversity. Jazz is half-Chinese, one of her best friends is Japanese. AJ is Black. Many of the werecats are Latino. Logan is Creole with Black ancestry (and some nice history behind that). We have a Native American who manages to both have woo-woo and combat stereotype. We have ghouls and they’re actually intelligent supernatural beings of Middle Easter origin, have Middle Eastern members and aren’t just corpse munching zombies as so much of this genre reduces them. 2 of Jazz’s friends are bisexual and in a relationship and one of her more distant friends is trans.

It’s such a large amount of diversity that it risks the Five-Token Band, but even the minor characters have more info about them as people than them as marginalised people. It isn’t always perfect by any degree – Angel is described as short because she’s Japanese (and, like every Japanese person in this genre ever, she’s a Kitsune), we have AJ’s skin described as “chocolate” and whenever Barta’s around there will be some comment on her androgyny (and Jazz’s personal ring tone for her is “Dude looks like a lady” which should get her a every curse witch Barta can throw). I also think Jazz going into heat was ridiculous and unnecessary and the whole story was pretty full already without us having Jazz crawl-the-walls horny/jealous

It wasn’t perfect, the excess story elements were unnecessary and some of the excellent scale of inclusion definitely has issues. But “not perfect” still leaves plenty of room for pretty damn good – and this book was that and more. Bring on the next book and keep this series coming!