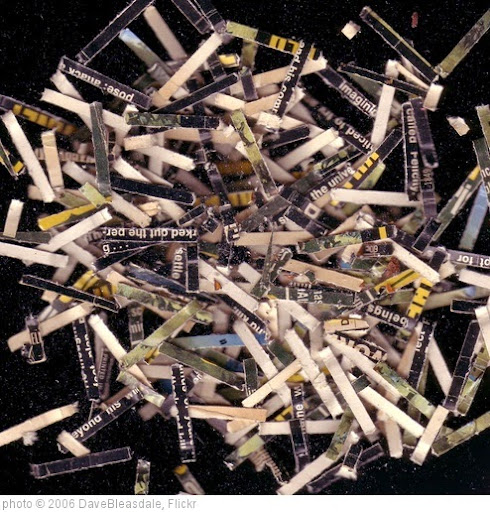 Urban Fantasy is a big genre. There have been a vast number of stories written in this genre covering a huge range of monsters doing all kinds of things. Vampires have been seducing school girls in a gazillion books, werewolves have been all Alpha and growling their women into terrified, weak-kneed sexiness so often that I’m sure publishers believe women have multiple orgasms every time they hear the foamy growls of a rabid dog (please do not write this story. Please) and the fae have danced from the pages bringing us a thousand different depictions of what Americans think the Irish sound like.


This genre is very full. I love it, it gives me infinite books to read (and comment on), but occasionally it’s hard to find something original and I think writers often have the same problem. In a genre with so many stories about vampires, werewolves and, to a lesser extent, fae, witches and zombies, how does a writer guarantee that their book/episode/etc will be original?


Well there’s a whole world out there full of creatures! Cultures, traditions, mythologies of an entire world are just waiting to be harvested for cheap monster fodder! bring on the Wendigo, call in the Kitsune, dig up your Ghouls and season it all with some random deities to complete the picture - originality awaits!


Sadly, that description isn’t even all that snarky - it’s accurate. Non-western mythologies are mined for random shiny creatures without any real attempt to delve into the mythology or legends behind them or any inclusion for the actual people from those cultures. The creature is there literally to be something shiny and new with no attempt to even get a decent representation of the creature, let alone the cultural context it comes from.


The example I most constantly rant about is the Wendigo. If you’ve been following Fangs for any length of time you will know my rants about Wendigo. Wendigo (and, to a lesser extent, Skinwalkers) are some of the most common random woo-woo interest out there - usually without a even a second of Algonquin inclusion to go with this creature randomly ripped from their culture. Or, if there is, it’s a Native American who explains what it is before wandering away and letting the white people do battle with the werewolf. Yes, werewolf, because 90% of the time the writers use “wendigo” and “werewolf” interchangeably and just swap silver for fire. Charmed, Supernatural, Blood Ties, Haven (and the fact Haven managed to throw in Wendigo Troubled People” shows how bad its got), Grimm and even Lost Girl mentioned them as fae once.


But Wendigo are far from alone, Dresden Files and Kitty Norville series drag up Skinwalkers (the Kitty Norville series pulls in a lot of Chinese supernatural for one book never to be seen again as well), Kitsune are scattered randomly and without any backing or development in a huge range of series including Salt Lake After Dark and H&W Investigations. Tengu appears as background one-off characters in the Deacon Frost Series. The Mercy Thompson series goes for books on end drawing on Native American woo-woo with little inclusion or context until River Marked when the author seems to find wikipedia.


I can’t even count the number of books that have dragged in ghouls and separated them from anything resembling their original Middle-Eastern legend. Half the time, ghouls is nearly synonymous with zombie. I’m not even going to begin to count how many times Voodoo is thrown into a book of TV series for a one off episode or book with lots of dark magic, zombies, Baron Samedi (always Baron Samedi - in the same way Native American entities are always Coyote) with maybe a few dangerous Black people (or Latina in the Anita Blake series, possibly because the author got confused) to sell it.


Supernatural probably takes the prize for appropriating non-western cultures - not only does it have a full stable of creatures Wendigo, Rakshasa, Djinn, Kitsune randomly ripped from non-western cultures without a shred of development - but even pulled in gods like Ganesh and Kali and had them casually killed or driven off by Lucifer. These Hindu deities were included in a single, throw-away one-off episode expressly so they could be killed by Lucifer and show how dangerous he is.


If it weren’t for this gross appropriation, Lost Girl (reducing every supernatural creature of every legend to Fae) and Charmed (happy to treat any legend as a monster of the week, calling every and anything “fae”) would be notable, but Supernatural has set a grossly high - or low - bar.

Sometimes there will be some desperate attempts to throw in a random POC to try and back up the creature - but too often it’s blatantly obvious that the only reason they’re there is to show off the woo-woo; a trope quite similar to one we’ve noticed with mixed-race protagonists. It’s reached a point where if I see an Asian character in Urban Fantasy I look for the fox tails - because we will be looking at a Kitsune (amusingly, I found one book trying to play coy with whatever mysterious supernatural the Asian character was. She was a Kistune and the only reason I was surprised was because the book made such a big thing about the mystery of it that I discounted Kitsune as far too obvious). In Grimm, a Latina characters were introduced expressly for La Llorana and El Cucy and we’ve yet to meet a Native American in Patricia Brigg’s Mercy Thompson series who hasn’t had some kind of woo-woo.


These TV series and book series don’t incorporate these legends into their stories - they raid the culture for anything that looks interesting.


They’re sometimes so changed from their original as to be unrecogniseable and they have no foundation or cultural context attached which is doubly problematic because these books are aimed at an audience which is unlikely to have a great deal of experience with that foundation or cultural context. Unlike so much of western mythology, these legends and cultures are not given nearly the same media attention, do not appear as commonly in the genre or fiction in general nor do they receive the same level of attention in other contexts like education or in mainstream western culture.
So while I can be sure that most of the audience watching Supernatural portray a very dubious Gabriel has seen, read or is aware of a vast number of other depictions of angels and is fully aware of what angels are and the cultural context of their legend and theology, the same cannot be said for Supernatural’s depiction of Ganesh, Rakshasa or Wendigo. These shows and books may be the only exposure most of their audience has not just of these creatures, but of the legends, cultures and even the people behind them. Something which becomes all the more problematic when we realise these creatures are presented seperated from all of those things


And, with the dominance of western media, the increasing popularity of speculative fiction and the lack of representation in the genre, we’re likely to reach (or may have already reached) a point where more people have heard of the Wendigo than actually know the Algonquin people exist.


Don’t get me wrong, we love Urban Fantasy books that delve into the legends, mythologies and cultures that are so often absent from not just the genre but from the media in general. We would love to read more books and watch more shows that look beyond Western Europe for their world settings and acknowledge there’s a full world of stories out there we can celebrate, appreciate and explore.


Even books whose whole setting isn’t based on the legends of non-western cultures can incorporate them in a respectful fashion. Kenya Wright’s Habitat Series has some excellent Yoruba-based inclusion. Seressia Glass’s Shadow Hunter Series incorporates Egyptian beliefs and Polenth Blake’s Sunstruck has some nice foundation to the Native American culture and beliefs depicted in the book. Less perfect but still a decent level of incorporation is Faith Hunter’s Jane Yellowrock series and CE Murphy’s Walker Papers Series both incorporate Native American legends into the series and make an effort to back them up with research, development and non-stereotyped characters.
It can be done. These fascinating, excellent legends can be introduced into Urban Fantasy - and should be. These stories deserve to be told, these legends are every bit as worthy of notice and celebration as the vampire and the werewolf - but they also need to be respected, included and have their context established - not raided, twisted and presented chopped up in chunks as exotic titbits to an audience that has no idea where they come from or what they once were.


This disrespectful appropriation is only exacerbated by the past and ongoing destruction of marginalised and non-western cultures through imperialism, colonisation, genocide or simple overwhelming media and cultural dominance. Many of these cultures have been prevented from telling their stories, have had their stories destroyed, silence, erased and forgotten for so long. To then come in, take parts of these stories to be random shiny toys for a one-off episode of exotic woo-woo is not remotely inclusion - it’s just adding insult to injury.
Posted by Sparky at 9:00 AM