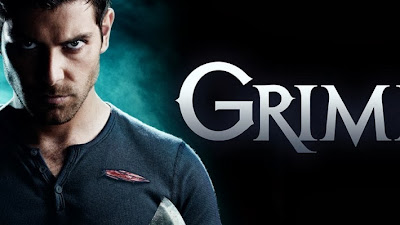 “Sleep child, sleep now. Or else the Bogeyman will come and eat you.”

A petrol station is robbed late at night by 2 men in masks speaking Spanish who savagely beat the cashier, Andres Venegas, while stealing the money. Andres goes to hospital in critical condition, unconscious with his mother watching over him, begging in Spanish for him to live and for his attackers to be punished. We move to see a figure watching the story on the news, his face his hidden but his hand is monstrous and clawed and slashes the chair he’s sat in in rage.

At home, Juliette is wandering back and forth worrying about the email Nick got from “M”, saying they loved Nick (I still place odds on it being Mummy Grimm). Nick comes home and she tries to pretend nothing’s wrong – really badly. Then she confesses she was in his email and she shouldn’t have been, to which he says he told her too and he has nothing to hide; again, not even slightly bothered. She springs on that and reveals the email. And she wants to know who “M” is.

He’s all distracted and doesn’t pick up the subtext and is worried about his mother while Juliette tries to absorb “my mother who died when I was a small child isn’t actually dead and is now in trouble.” Nick realises she needs some recapping and thinks he’s been keeping it secret – but Nick only found out last year when Juliette was in a coma (followed by amnesia – truly it has been epic the number of excuses Grimm has found for keeping Juliette in the background). We get some recap flashbacks. Juliette asks why he didn’t tell her and he points out that they haven’t exactly been together again until recently – also, Mummy Grimm is a Grimm (Juliette is shocked by this news – and realises that Grimmyness is genetic). Mummy Grimm couldn’t stay because of the naughty murder and now Nick can’t help her – but Juliette has gone from accusatory to supportive which is a wonderful relief.

Meanwhile, the two robbers who put Andres in hospital rob another store – hitting customers and the cashier above and beyond what they needed to in the robbery. But when they run back to their car, they’re attacked by the claw handed creature. It rips out one of their throats then hunts down his accomplice

Nick and Hank are called in and after seeing the bloody remains, speak to the witness – who is nervous and afraid to talk to them. They search the car and find the dead men’s hidden wallets and the masks they used in the robbery – it doesn’t take a brilliant detective to figure out they’re not good people. But what is surprising is the money has been left behind, the killer didn’t take it. Hank suggests Wesen but Nick says Wesen like money as much as the next person.

They head to the robbed store where Wu talks them through the scene (and they’re ranted at by an angry local, David Flores, who is important because the show has drawn attention to him). They check the CCTV looking for people who visited the store just before the robbery who may have seen them robbers come in or be attacked. One of them, reluctantly, gives the name Ray Bolton who keeps dogs – and fights them occasionally and they do get out. He’s nervous about giving the name and it’s inferred that ol’ Ray isn’t the friendliest of people

At home, Juliette is doing her own detective work – tracking the IP of the email from Mommy Grimm to a place called Visnja Gora. When Nick arrives she’s eager with the news having tracked the place down to Slovenia; Nick realises she’s on the way to Greece. (Possibly with the coins).

Next day, Hank checks Ray’s record and finds a “professional bad guy” (drugs, assault, etc) and he has worked with the two dead robbers before – and one of them testified against him. Nice revenge motive.

With animal control they go visit Ray and swab his dogs for DNA (shouldn’t you swab the wounds for dog saliva first? And weren’t the throats slashed by claws?), the ominous music drawing attention to a woman hiding in the house. Ray gets angrier and angrier, insists they’re not taking his dogs and Woges at Nick – when he sees that Nick is a Grimm he attacks and gets arrested. David Flores again shows up, this time to cheer Nick and Hank for locking Ray up.

Ray doesn’t seem particularly afraid of Nick as a Grimm – and protests his innocence; neither he (and, yes, he acknowledges that he could have done it as well) nor his dogs did it. They get a report from Wu that the dogs were not the killers – bit now they know Ray’s a Wesen they think he did it himself. Which is difficult – because if they do get a match they’d have to explain it in court.

First, they want to know exactly what Ray is – to Monroe’s for food and brainstorming over blood stained pictures. Juliette, the vet, concludes it’s not a dog (not enough tearing from shaking). Monroe mildly disturbs Frank by describing how Blutbad go for their prey – errr, victim. Nick describes it and Rosalie and Monroe come up with a Hollentier. An ancient Egyptian Wesen who are generally unpleasant – and this guy wasn’t afraid of Nick because Hollentier are too stupid to be afraid.

And then there’s another person attacked. A man tries to attack a woman late at night when he is grabbed and has his throat brutally slashed by the clawed creature, again. 3 victims, same neighbourhood, all bad guys – a vigilante. (And, yes, Flores is on the scene again). They interview the woman and when the ask about the killer she says he was “El Cucuy.” Rather than press her to see what she means they decide to ask Juliette since she speaks Spanish.

Juliette says it’s a version of the “Bogeyman”, he grandmother called it “El coco” and used it as a generic monster to enforce childhood obedience (ah, the delightful parenting technique of supernatural terror). To find out if it’s real, they go to see Pilar. Pilar tells them a story of her childhood when their neighbourhood was being terrorised, several women called out to El Cucuy for help – and the bad men were killed, seemingly torn apart by wild dogs. She believes El Cucuy wanders until it hears the cries of women who have suffered from evil – with enough voices it wakes and hunts.

To the Grimm trailer – and Juliette loves the books. Despite her loving the history, they find no indication of El Cucuy and wonder if it may not even be Wesen.

At the neighbourhood, Ray and his goons attack Flores for his many speeches. While at the police station Hank and Nick consult with Renard and focus on Flores – he lives with his mother and is a marine with PTSD who may have come home, found his neighbourhood going to hell and decided to fix it.

Switching to Flores who returns home, ignoring his mother and ranting about the police letting Ray out – he pulls out his uniform and a knife.

At the police station Wu brings the CCTV footage of the bus the woman who was attacked was on and they see an old woman on the bus – the same old woman, Mrs. Garcia, who was at the store before it was robbed. They decide to check on her again and ask her to come to the station to look at ID photos. But on the way back to the station they get a call from Wu – Flores’s mother called about her son and they think he’s going after Ray. They go to intercept.

Flores, in uniform, carrying the knife, bangs on Ray’s door while he’s inside counting illegally gotten gains with his men; Ray woges and attacks. Flores doesn’t have much chance – which is when Nick and Hank show up. They take Flores to the car – and find that Mrs. Garcia is gone.

Inside Ray is attacked by El Cucuy – El Cucuy in a cardigan. Nick hurries in to find Ray’s body – and El Cucuy morphing back into Mrs. Garcia; and she realises he’s a Grimm (her arms covered in blood).

They take her to the police station and the sweet little old lady is sure no-one will believe she’s a quadruple murderer. She says they don’t have to worry about her, the neighbourhood is safe, it’s time for her to move on.

Renard, Hank and Nick are pretty bemused by what to do with her – while her ear lengthens and she hears, in the distance, more women asking for help and justice.

They let her go – and we close with some poor fool bag snatching from her… and her woge-ing.

In Austria, Adalind is having some pre-natal doctor appointments and everything’s going fine – except the doctor heard a second heartbeat, but saw only one baby. She puts it down to an echo. She is followed and watched by Sebastien and Meisner who also plan to get her medical records.

They send her ultrasound to Renard along with a video of Adalind – and he looks troubled.

That was an interesting dilemma – and again shows the boundaries of police work and being a Grimm and the difficulty of knowing what to do. Of course, it’s somewhat simplified by making El Cucuy’s victim’s repugnant and El Cucuy so sweet and innocent – I feel rather that it would have been more deep and thought provoking to have a sweet, innocent killer who was, perhaps, disproportionate or targeted people who were less ambiguously evil.

I’m glad to see there were a number of Latino characters when using an element of Hispanic folklore, and actually delving into it to some degree.