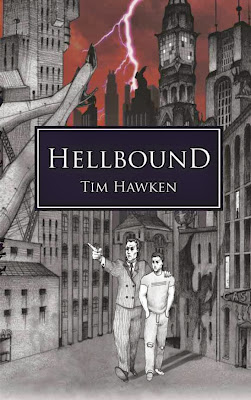 Michael is dead and in Hell. That’s definitely a cause for concern – but Satan is quick to assure Michael that Hell can just be a temporary stop so long as he confronts his sins, deals with them and properly confronts and accepts responsibility for them and he can ascend to Heaven. At least once all of his sins are discovered and he gets all his memories back

But when he does, he finds it’s not redemption he wants – but revenge against those who hurt the woman he loved. And Satan is more than willing to help him with that – because Michael is the key to getting what he wants, final revenge against god.

This book is that rarest of gems – completely original. I don’t think I’ve ever read a book that was quite like this. While I’m normally reading trope after trope after trope, this book was a refreshing new story that I’ve never seen before.

Part of the problem with this is I can’t truly describe why it’s new or original without giving away some pretty huge spoilers. The ending completely overturns everything I thought was coming, it’s the ultimate twist and turned me from being quite interested in the next book, to being utterly fascinated and desperate to see where it is going. I really can’t explain enough how epic and world turning the whole twist was and how it cast everything into such a radically different light. It was a perfect surprise and took an already original book to the next level.

The setting itself is an interesting one – hell, the afterlife Hell, ruled by Satan where souls go not to be punished but to be redeemed. They go to relive their sins, to feel epic, incredible guilt for those sins until they come to terms with them, root the core of them out of themselves and are then worthy to enter Heaven. It’s less a punishment, and more a cleansing to ensure that Heaven is not polluted with sin. Michael enters Hell after death, with no memory of who he is or what happened and is given a guided tour by Satan himself – learning how things work, seeing the many sights and hearing the origin of demons – people that have come to embody their sins. The exploration doesn’t just reveal Hell but also Michael himself as his memories return with each wave of guilt, revealing more of the fascinating story.

But there’s also a lot of fore shadowing for more – increasingly as the book goes on its apparent that some of the sins are not quite what they seem. To begin with I considered this a failing of the book – I have early notes expressing my disapproval of Michael‘s “lazy” life, motivated by fear, after he went through something traumatic was truly the sin of “sloth” so much as it was evidence of deep trauma. I was about to note in the review at the terrible treatment of mental illness with this and the suicides – but as the book progresses it becomes apparent that the failings are part of Hell. That the system isn’t quite as clear cut as we see – and this progresses with ever growing foreshadowing of how the whole system is  not nearly as neat or obvious as it first appears. Again, I can’t talk about this without spoiling the book except to say the hints keep coming but the ending is still a shock.

The pacing of the story is interesting – it’s not fast and action packed (though it has moments of action), it’s more a slow explore as we learn more about everything in a steady, smooth pace. We learn about Hell, we learn about Michael’s personal experience, his goals turning from self-discovery to finding his way into Heaven to revenge for his lost love - and, ultimately in a grand reveal, we learn the truth behind it all. It’s a perfect pace for the story, too fast and we’d be lost, too slow and it would drag. It’s a nice balance

There are some wonderful poignant moments, like Michael looking back at the wisdom a mentally ill homeless man gave him to knock him out of his fit. And some hilarious concepts (every famous person will go to hell - because you can’t be famous without making yourself a false idol and god is jealous about that kind of thing) and some thoughtful things – like Michael questioning how a brothel can not be sinful and Satan questioning whether paying a consensual adult for something they’re willing to do is better than tricking a woman by pretending to be a nice guy and then leaving in the morning.

In terms of diversity, we have Marlowe, a Black man who appears to be a vague and ill-defined wise man as well as a servant/supporter/guard for one of the big powers in Hell. I can’t say much about him beyond that because he’s not very well defined. There’s also some Thai people in Michael’s flashback to his time in Thailand – but it’s a flashback to an underground fighting ring.

There are no GBLT people at all. There are women – but not many, limited to background, a prostitute and, of course, his love interest. The wife who motivates Michael, the wife who was raped and brutally murdered for him to seek revenge – in other words, she’s fridged, she’s a damsel, she’s a reason for Michael’s actions.

This series is definitely one I want to follow. It’s original and imaginative, with a powerful, deep story that is revealed in perfectly spaced layers. Each revelation leads us deeper into the world, further into Michael’s past and reveals more of a plot that is glorious in it convoluted twists – definitely worth a read