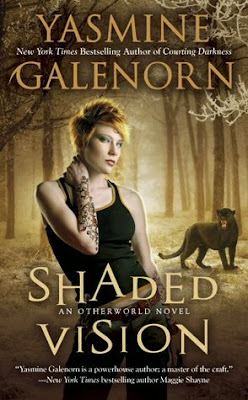 A bombing rocks the supernatural community, stunning them with fresh grief, anger and worry – who is behind it? Fingers instantly point to the human anti-supernatural hate groups who are growing louder and more vicious with each passing day. The newspapers engage in the worst kind of “journalism” and there have even been a string of rapes attached to anti-fae hatred.

But how much is it the human haters, and how much is it a new scheme by the demons, newly reinforced with forces of nightmare from both the demon world and one of the worst Sorcerers in Otherworld’s history coming to Earth to further their quest for the spirit seals.

In many ways, this book brought the series back on track to a degree. After a few books of endless distraction, personal drama and side-plots we returned partially to the main plot and partially to a dominant side plot. And, frankly, it was about damn time because the series was rapidly losing itself.

But now we have dramatic bombings and tackling of two major issues. Firstly - the human prejudice against the fae and the supernatural in general, how difficult that is making things and finally rallying to strike back against that and do something concrete to shift the tide of public opinion. I like that it was addressed and they finally did something rather than spend several more books wasting chapters on lamenting on it but not actually doing anything. I think it was generally well done with some very good ideas but also that it was rather simplistically fought and defeated. The big bad was too careless and too easily brought low, the general community was too eager and too easily rallied against hate (which, if history tells us anything, is rather dubious since the non-affected community is usually far more apathetic than that). It was good, it was nicely addressed – but it was a little simple.

The second storyline was the big one – Shadowwing! The big bad is actually on everyone’s radar again. We have bombings, investigation, killing off bad guys, alliances with the demonic underground and generally being back on track. As a bonus, I think we’ve also seen the last of at least 2 pernicious elements that were clinging to this series way past there should-have-been-dead-and-buried dates.

Of course, this wouldn’t be an Otherworld book without endless distractions: Chase’s heritage, Zachary’s new life, Shamas’s secret, Delilah’s completely failure to live like an adult and keep clean and Iris’s wedding. Some of them were good – like the wedding, but a lot of them were also really really pointless. There’s also a real problem with character and storyline bloat that necessitates a lot of recap. My bright spot is that I think a lot of these storylines are being closed.

A lot of this book is introspective and deals with how much the D’Artigo sisters lives have changed but also how much they have changed as people as well. And part of that is regretting the change. I’m torn on this – on the one hand, I wish it weren’t Delilah doing these musings while at the same time I have to admit that she is the one most likely to. The problem is that Delilah has always been rather immature and childish and she was coming out of that – some of these musings feels like a step back. I also have the least grasp of Delilah’s love interest Shade because he’s just… there. He dropped in from nowhere and became Delilah’s One Twu Lub even more abruptly and with even less screen time than Menolloy’s Nerissa. So when Delilah laments about the past I almost feel like she is resenting her sister’s happiness because I quite simply don’t believe hers.

Still, it’s also realistic and doesn’t mean she’s mean or selfish necessarily – but major parts of her life are changing. Major people in her life are developing and she is no longer their focus. Especially since she was both the baby of the family and how close knit their family has been – there is a sense of losing sisters and mother figures. Yes that does kind of seem selfish – like she’s resenting their happiness and not being focused on her – but it is a very human reaction. Things are changing, people are changing, people she loves are changing and it’s only natural to fear that change.

There’s also a reflection into how the sisters have changed and hardened – especially Delilah – and been hurt (especially Camille the rock of the family) which has shaken them a lot. It’s not a bad thing to spend some time reflecting on how their family has grown but also moved apart, how new people have come and then found their own lives and how the sisters themselves have been scarred, have grown, have stepped up but also been hurt.

We’re also seeing that reflected in the other sisters – as everyone has rallied round Camille after her horrific experiences, they’ve also learned to be more independent of her which has left her feeling a tad unneeded.

We do have a few POC – not just Morio but also among the allies against hate they rallied. They’re not bad or stereotypical characters, but they’re not major characters either. Carter has been revealed to be bisexual which is a step up – though he’s in an inherently short term relationship. Menolly continues to have an excellent relationship with Nerissa that is great to see.

However, there’s something rather tasteless in having a bachelorette party in a lesbian bar – and to then invite a male stripper? Good gods, vomiting on said stripper’s crotch is the least rude thing they did all evening!

I’m also not keen on Tim generally being completely and utterly absent from the story suddenly being there to offer the GBLT community in anti-hate rallies to stand in solidarity with the fae. It makes him – and the community – feel like a tool to them and puts a special primacy on the anti-fae prejudice. Especially since there’s a strong thread of both appropriation (“Fang hags,” really?) and implication that anti-fae prejudice is the new hate while anti-woman, poc, GBLT hate is no longer acceptable.

I dislike that we had another book with strong rape elements – because this is a massive pattern in the series. Even when rape is treated as as horrific as it is, when the issues surrounding rape are covered pretty well and there’s a lot of survival messaging linked to it – it’s still yet more rape.

On the whole I think this book is pulling the series back to where it needs to be. It’s has it’s ramble in the wilderness and is now back on the rails heading down the plot. But it’s still pretty bogged down. I would say I found the book mildly amusing but with hope that the series itself is going to reverse its downward plunge.