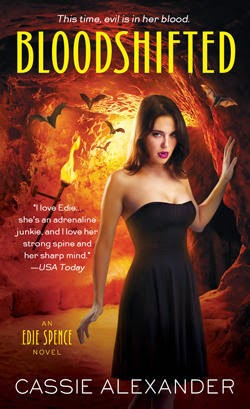 Edie was rescued in the last book and her life saved from the parasite inside her – with an infusion of vampire blood. When a human drinks vampire blood they become a Daytimer, the people Edie had so often pitied when working in the hospital. Bound to vampires, the benefits of strength and resilience are offset by the enslavement to a vampire – mystically forced to obey their every command

And most vampires are not nice people, Raven, her new master, is certainly not one of them. Edie has to hope to survive until Anna can rescue her – originally planning to wait until her baby is born. But life as a Daytimer is fraught, dangerous and highly competitive and rescue plans – or escape plans – need to be speeded up. Especially since her conscience won’t let her stay idle in the face of Raven’s abuses and murders.

I really like Edie as a protagonist – she has so many excellent qualities that make her stand out as a special person without needing special shiny woo-woo that sets her above or apart, without her having to be the Chosen One. Edie is a nurse (and so is the author which means we have some excellent authenticity), and, now, a Blood Servant. But she’s a Blood Servant among Blood Servants, she’s still the bottom-of-the-rung baseline. But she’s intelligent (without being a genius), she’s brave (without being a foolish, defiant, RAWR-I-PROOVE-HOW-BADASS-I-AM-BY-HEADBUTTING-DRAGONS!), she’s extremely good – but not saintly. I think that last point is an excellent balance to strike; Edie is good. There are lines she won’t cross and she will risk herself to save someone, unable to live with herself if she didn’t. But she’s not going to do it without weighing up the risks and, ultimately, if she has to keep quiet or even do something terrible to save herself then so be it. She hits a great balance in a genre that is often quite inconsistent with their protagonist’s morality (often the confused result of wanting to write a super saint AND a ruthless badass at the same time).

What I wasn’t thrilled about is Edie’s single-minded focus on her pregnancy. Yes, she’s pregnant, yes she’s worried about the baby – but it’s ok for her to worry about her own life as well. It’s ok for her to be afraid and want to live without using the baby as, I don’t know, some kind of justification for self-interest? Like Edie doing every she did in order to live is not acceptable, but it’s ok so long as it’s clear she’s doing it for her pregnancy? And I’m quite sure the zygote isn’t judging Edie on her behaviour, she can stop worrying about that

I like that there is still a level of complexity to the meta-plot of this book and series. There are enemies (like Dren) who have become… well, if not friends, then reluctant and complicated allies. Which covers a lot of the relationships in this book – Anna is Edie’s friend and that’s true and endearing and powerful – but the concerns about her, what she represents and what she seems to be doing are legitimate. House Grey of the vampires is threatening and menacing and has been a terrible enemy far too often – but are they entirely in the wrong? Even the Blood Servants Edie spends time with – the friendly are only friendly to a given degree while even the most hateful of the enemies have a good reason for their opposition, hyper-competitiveness and general insecurity.

Even the big bads are not too simplistic. Natasha is naïve and foolish and has been terribly manipulated from a young age and even Raven has a past which goes a long way to explain how he became what he is. I appreciate the complexity that stops anything being easily simplistic (even Edie’s relationship with Asher has caused considerable complexity to get past in previous books).

The plot itself is interesting and decently paced – but didn’t have much in the way of twists. I don’t think it necessarily needed twists and it also did well for revelations about the world (including adding some excellent clarity to elements that had been suggested before – really solidifying the world). I would say it was an interesting read but not, necessarily, an exciting one simply because Edie was the only character in the book I cared about and it was pretty inevitably that she would get out. I was interested to see how she got out, what the consequences would be and what more would be revealed along the way – and none of these elements disappointed – but I didn’t get any real sense of tension. Of course, since I enjoyed it anyway, was tension really needed? Maybe not in terms of making it a good book, but possibly in terms of following the theme through; even if the book is enjoyable without it, shouldn’t a kidnapping and fight for survival be tense?

The only inclusion that was apparent in this book was of the Prisoner – and him rather dubious. His skin is described as “dark tan” which could be POC – or, given his country of origin – could be Mediterranean. He also describes forcing another man to “warm his bed”. Ambiguous skin colour and man who rapes other men isn’t exactly ticking inclusion boxes.

This book is a good book in itself, but I also feel, in terms of the series, it’s a transition book. Edie was in Y4, working for the supernatural community and the Shadows. She was forced to leave and had a level of a normal life – though the supernatural kept intruding on that, she was still largely an individual outside of the system. She was a human in a predominantly human world and existence with the supernatural leaping on everything. Now we’re heading back to the supernatural being structurally part of Edie’s life, only from an entirely different angle. I think this is going to lead to a lot more grander events as Edie goes from looking at the supernatural on a more micro level (something happens in her life, embroils her and she’s dragged in – and while it may have grand consequences as it often did, Edie’s involvement was to be pulled in) to her being a greater part of the systems that make up the supernatural world.