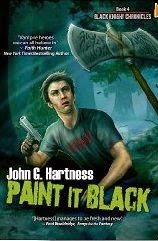 People are going missing and have been for some time – seemingly without a trace until some jawbones were found. But they’re too old – they definitely match the victims but are years older than they should be.

Woo-woo is afoot and between the changing age of the bones and troll involvement, all clues point to fairy land, and the dangerous and alien goblin market. Clearly careful, subtle investigation is needed.

Such a shame that James and Greg don’t do subtle or careful.

I liked this book. It was fun. It had some hilarious moments, it had some pretty exciting moments. It had action and adventure and weirdness writ large. The story was fun, it covered a huge swath of the world, it brought up some interesting points about the relationship between the worlds and gave the characters some room to grow. It had a lot of good there

And it had a lot of, well, basically a whacky romp through fairy land. The guys (backed up to a lesser extent by the supporting cast) rampage their way through “investigation” which involves breaking things and hitting things until answers fall on them or people given them answers just to make them go away and stop causing trouble. This is a form of “investigation” that annoys me so much in Urban Fantasy and I was getting a little irritated with it here – except it was blatantly lamp shaded. James openly admits that his plan is basically to hit things and hope he finds answers doing it and it is presented as exactly as silly as it sounds. And it doesn’t work. Oh they make some progress but at nearly every step of the way of their “let’s rampage and get answers” they run into something bigger, stronger or smarter than them that is less inclined to tolerate their nonsense. The greatest challenge of the book is fought through the mind and not with vampire might. Sabrina is there to provide sense and rescue and they rely heavily on the patronage of the fairy queen they earned in the past to dig themselves out of the foolish hole they’ve dug

They do get answers, some of those answers do come from their whacky and ill advised rampage. But that rampage is always very clear as being ill advised. Especially compared to the very efficient investigation they perform later (though I do think that Greg’s computer skills are morphing into a slightly ridiculous Deus Ex).

The problem is that a large part of the book is a rampage through fairy land (and I’m not a fan of fairy land in this series anyway, it feels like an excuse for the author to just throw every random thing into the story). It wasn’t a bad storyline, but it also didn’t add a whole lot of anything and didn’t exactly thrill me.

Much more awesome are Sabrina and James relationship – also good but undeveloped was the moral conflict of James’s vigilantism which was a little brushed over. I think I’d like it poked more but at the same time I can understand why absolutely no-one wanted to speak out in protest against what James had done.

On an odd comment – I actually like that James is stepping up a little more this book as well, even if I don’t quite see why the fae queen should see him as so special. While I’ve always appreciated a protagonist who wasn’t the super-duper-specialist-most-powerful-of-them-all, in the last couple of books I’ve also been doubting just what role James serves in the story with Greg, Sabrina and even Abby having talent sets to bring and him not really bringing a whole lot.

Inclusionwise – we have Bobby, a Black man who provides them with blood who has a brief cameo appearance and Stephen, a gay man, shows up for a brief cameo when his woo-woo is needed. Very background.

I’d still like a toning down of references to Greg’s weight every 5 seconds. While a fat vampire is certainly a novelty, constantly harping on about it is not. I do like Greg and James’s conflict particularly James finally snapping and growing tired of being blamed all the time – in a genre that LOVES protagonist guilt and angst, it was nice to see

While I don’t much like Abby I do appreciate her. She is determined to live life her way and live life as a vampire her way. She doesn’t accept Greg’s judgements of how she should act as a vampire, nor James’s hypocrisy over her feeding which ultimately comes down to paternalistic control and even contempt. After all, he decides that it’s ok for him to feed off humans but doesn’t trust Abby to be able to make the same judgement call. She challenges them making decisions for her, refuses to be treated as a child and refuses to accept them questioning her life and her choices or accept them in any position of authority over her. She’s happy to work with them as a peer, but she will leave and even fight them if they try to turn her into a subordinate. I respect that a lot.

Unfortunately Abby does get a lot of sexualisation which is really gratuitous. Greg and James have been living with her for some time now, I think they should be able to stop being constantly googly eyed over how hot she is. On the plus side, the Dresden Goggles have been taken off for the other characters. James and Sabrina’s relationship is based far more on respect and James mentions being slightly afraid of Sabrina as often as he mentions her sexiness. Anna is awesomely, terrifyingly powerful and also unsexualised (she also doesn’t like James very much). It has toned down a lot rom previous books.

This was a good book, it was a fun book, it was a quick, exciting read with moments of excellence that dragged just a little in places. It’s a nice addition to the series and keeps it moving forwards and keeps it being one I’ll always check out – I just hope for something a little… meatier next time.