City of Roses Vol 1 "Wake Up" by Kip Manley 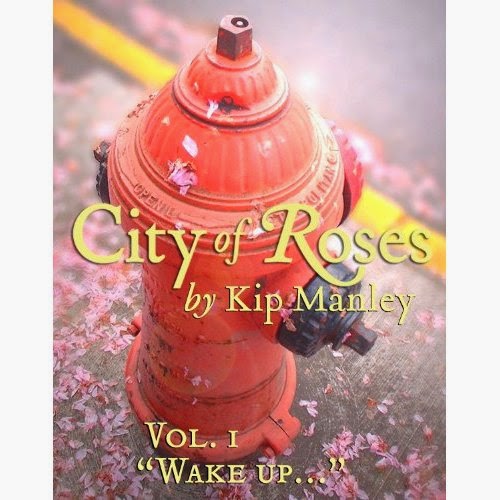 Jo has good friends, she has her tiny apartment and she has her awful job cold calling people. It’s not a great life but she manages – until a night out partying leads to a duel with a fae knight

She is now responsible for Ysabel. The Bride. Fairy princess and the centre of so much intrigue – and it’s Jo’s job to keep her safe. And fed. And entertained.

This book has an excellent concept – Portland split between 4 very different fae factions, the political manoeuvring between them, the ritual and the scheming and the propriety all maintained. And under that the underlying game of it all, with none of them actually able to cause real damage to each other – until the rules of the game change.

Then there’s the princess, forced by circumstances to live with Jo in her tiny apartment and join her on her dead end job. A faerie princess forced into such low standards – forced to work in a call centre – how can that not be a recipe for hijinks and shenanigans (and interesting class commentary)?

The execution is appalling.

I don’t understand why Jo has so few questions. She never asks about the fae, the courts, why they are there, how long, what they mean even what a Gallogas is (which is apparently her).

The writing is really excessive. The description is really over the top, long winded, unnecessary, grossly elaborate and just bloated beyond all proportion. And it’s repetitive as hell, I knew what everyone was wearing at all times in ridiculous and unnecessary detail that would be repated when referring to that character over and over again. Every setting and scene had every inch described luridly (and unnecessarily) to a level that left me tempted to skim the book to try and sift some nuggets of story out of this endless dross

Then there’s the characters. Most of the characters have a title or label and a name. They can be referred to by ether and are also often referred to by a vague description. So, Orlando can be referred to as Orlando, or as The Mooncalfe, or as the man with the Japanese sword, or as the man in a skirt. Any of them. Interchangeably. At random. And that isn’t just Orlando – there’s Roland (The Chariot, the man in green). There’s Gaveston (the Stirrup, guy with art tube, his clothing which was described which I can’t even remember).

This makes it hard to keep track of who is who and isn’t made easier by the 8 gazillion completely random characters (so many of which don’t have names – they’re ALWAYS referred to by descriptions or sometimes just “he”). I still aren’t sure if Guthrie and Gaveston are different people. The Duke (who may be Leo?) has between 1 and 3 women hanging around him all of which run by vague descriptions. There are two guys running around doing random things that are completely tangential to the story. They refer to each by surnames but are always described as “the big man” and “the small man”. I have no idea what the point is. Jo’s ex is running around for REASONS, a couple of Jo’s co-workers are also running around quite randomly (the number of utterly pointless characters in this plot bemuse me). There are a bajillion knights and I can’t even count them because they have different names or style of reference every other paragraph – and as for deciding who is on who’s side, I just give up.

On top of that we have some of the ridiculous dialogue choices ever. Characters will be talking and one of them will throw in completely random lines that make no sense, it’s only after a few lines that it becomes clear one of the characters is actually singing and song lyrics are just being dumped in the middle of the conversation. Worse, sometimes the characters are at a club or just sat in front of the television and not only will a completely uninvolved singer have lyrics appear in the conversation, but even lines from the television will be added. Two people will be talking then random lines will appear and you realise it’s the television (and it isn’t always clear because who knows we could have a whole new knight known as Television who will later be described by the lime green track suite he wears and turn out to be one of the other characters all along only I was foolish enough to remember their NAME and think that was sufficient to identify them). And that’s aside from conversation where neither side seems to be actually listening to the other and are just taking turns monologuing.

Finish this off with some really weird pointless scenes. Like Jo and Ysabel waiting to go to work and Ysabel not drinking milk. That’s it. A whole scene. I re-read it 4 times in case I’d completely missed something (possibly a knight called Milk who always wore white) but it genuinely seems to be utterly pointless. Even apparent main plot events – like the grand hunt – peter out without actually going anywhere or achieving anything

I gave up. This is just far too much work for the amount of fun I got out of it. The plot, the concept etc was not nearly good enough to justify burrowing through the labyrinthine text, the bajillion unnecessary characters and the sheer, random, pointless scenes. This book is really hard to read and really not worth it.