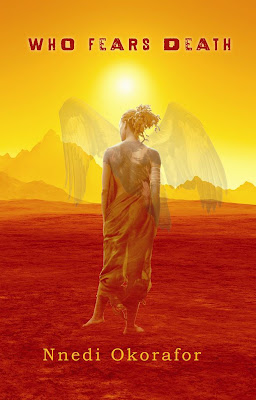 Onyesonwu is an Ewu, a child of hatred. Her mother is a dark skinned Okeke and her father was a yellow-brown skinned Naru who raped her mother. She lives in a world where the Great Book justifies the enslavement and subjugation of the Okeke by the Naru and fuels brutal enslavement, abuse and genocide of the Okeke that has driven her mother to the east, away from the fighting, to live in an Okeke town.

But, as an Ewu, even the Okeke revile her as a child of shame and violence, doomed to perpetrate that violence herself. Onyesonwu is also an Eshu – a shapeshifter – and a gifted potential sorceress but even trying to meet that potential is hemmed in on every side because of her blood and because of her gender.

With anger and passion, Onyesonwu and Mwita, a fellow Ewu, challenge the restrictions placed upon her, demand the respect and position she deserves and ultimately wins friends and training –albeit both heavily coloured by the prejudice she faces. Unable to tolerate the hatred and the killing, Onyesonwu turns her eyes back to the west, at the genocide’s heart, and is determined with her few friends to stop it, though it is a long journey through many hostile places. By magic or will, with a thin thread of prophecy for hope, she will find her father and end the killing.

This is a story about growth in many ways. Onyesonwu’s journey from happy childhood, difficult coming of age, then her resolve no longer to live with the world that she’s in and a determination to change it. Through the book we see her learn and change and grow, from a small child to a powerful sorceress, she is shaped by the world around her and it’s fascinating (but slow) to see.

We see how prejudice – both against her Ewu mixed blood and as a woman – shape her. How it both enrages her and constantly blocks her – and drives her to change things. She has a lot of passion and anger – some of which is directed destructively, as one would expect, but most is driven to push down the barriers and insist that she not be held back or stopped because of her race or gender and her determination, even her violent determination, to battle against those who treat her poorly because of it. Sometimes through demanding they treat her properly, refusing to accept their words and actions and sometimes through revenge.

The story has some really strong characters that grow along with Onyesonwu with both Mwita and Luyu growing and changing with their own experiences and learning. Even though they are secondary characters, they are still grown and developed rather than just being extension of Onyesonwu.

The world, is also fascinating and well built – the mythological history that was created with Ani and the Okeke and Narru and how that was exploited to justify the genocide. The magic system is deeply involved with many different forms and rules but coming back to the same basic foundation over and over. It’s rich and consistent and fascinating – definitely one of the better depictions of magic I’ve come across

This book did an extremely good job of analysing marginalisation extremely well. The treatment of the Okeke, the use of religion to justify slavery, abuse and genocide, the idea of racial superiority, the abuse of the Ewu, the blaming of children for their parent’s actions, the scapegoating of marginalised people. We even looked at how even friends can carry severe prejudice and bigotry, even when they know they’re wrong. We also looked at how people from hated minorities have to be careful with their own behaviour, how their actions reflect on the whole group and how they’re constantly expected to fulfil stereotype.

There was some extremely good analysis of a misogynist culture as well. Many people dismiss Onyesonwu because she is a woman. She is repeatedly denied training, considered overly emotional, uncontrollable and generally incapable because she’s a woman. A woman on her period might as well be producing super-powerful acid rather than blood, the revulsion with which she’s regarded. Women’s sexuality is considered dirty and dangerous and a woman needs to be controlled through female circumcision and magic because she can’t be trusted with her own sexual agency

But all of this is challenged – and not just for Onyesonwu, but for all the women. They fight against the assumptions, they challenge them, they denounce them, they decry how wrong they are and they reverse many of them, at least for themselves. This is a way to show prejudice and bigotry without endorsing and perpetuating it.

Unfortunately, this book had some really large pacing issues, for us. She spent a lot of the book growing up and much of the rest travelling – and while at many points in that story she learned and grew and the character and development were added to and improved, at many others we just seemed to be mired. Mired in travel, mired in Onyesonwu losing her temper again and being told to calm down by Mwita (which happens a lot), mired in bickering, mired in yet another example of prejudice against Ewu (and sometimes we had scenes that just existed to show that – which was fine, except it was repetition).

I think one of the primary stalls in the plot is that Onyesonwu set off on her journey to the west with an entourage. If it had just been her, Mwita and Luyu – maybe one or two of the others, it would have worked better. Instead we also had to drag along her other 2 friends and one of her friend’s husband – whose names I can’t even remember. A huge amount of time is spent with all of these characters bickering. In fact so much time is spent on them bickering and sniping, that when we had the big emotional loss moments with some of them, I found that I couldn’t feel the emotional impact because I was more relieved that one of the sources of constant irritation were removed. They did serve a purpose in the book on several occasions to reinforce the prejudice Ewu people face and reminded us the important issue that even friends and loved ones can still carry prejudices around with them, even against the people they loved. But that didn’t need all of them.

I wanted to love this book. I liked the story, the concept was interesting, the world fascinating, the protagonist well developed and the messages carried by it were powerful. But the pacing was so off, felt so mired and so distracted by extraneous description  and the story took so long to actually reach all its salient points that I wanted to put the book down. Without it, it would be a 3.5 fang or 4 fang review – but with those problems I just can’t, it was too much work to read and not nearly enough fun.

It lets it down which is a crying shame, because I have so much good to say about this book, so much praise, but I can’t get past how hard it was to read, how not fun it was and the most wonderful messages in the world can’t redeem a book that we just found boring.