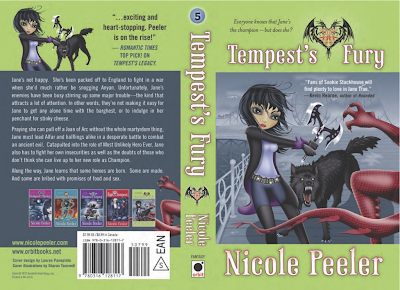 Very rarely do I stay up late to finish reading a book, but that is exactly what I did for Nicole Peeler's Tempest's Fury.  In the interest of full disclosure, I am going to tell you right now, the woman has made a fanpoodle out of me.

At the ending of Eye of the Tempest, Jane and Anyan were finally getting some much needed alone time when Blondie burst in with yet another supernatural emergency.  I found the ending frustrating because I had long been rooting for Anyan and Jane as a couple; however, that feeling of frustration could not possibly compare to how I felt at the end of this book. Oh Ms. Peeler, you are a cruel, cruel woman.

Given a special ax by the creature, it is time for Jane to fulfill her role as champion.  Though so much has changed, in many ways, Jane still sees herself as the small town girl who at the end of the day wants to lead a simple life, surrounded by the people she loves.  Not only does Jane now have to deal with the fact that she is essentially the chosen one, she is responsible for stopping creatures who cannot be killed and dealing with a political structure that is filled with factions.

As serious as the issues are in Tempest's Fury, Ms. Peeler as we have become accustomed in this series, still takes time to add a little fun. When we first met Jane she had never been outside of her small town. This is her first time in Europe and though the fate of the world hangs in the balance, Jane still wants to take the time to be a bit of a tourist.  Cheese and particularly a good Stilton, is high on her list of experiences and a few dates with Anyan if she she an fit it in while trying not to be killed.

Another source of tension is Jane's budding relationship with Anyan.  It seems that every time they have a moment alone together, something gets in the way of consummating their relationship. This builds a sexual tension throughout the story, which leaves the reader ready to chant, just let them do it already. It also encourages the reader to root for them as a couple, which is part of what makes the ending so damn devastating.  I won't spoil the ending for you, but suffice it to say, I almost threw my e reader.


This is the part in the review where we typically discuss the social justice issues. I have to be honest and say I don't want to do it, because my head is screaming, "precious, must protect the precious".  The Jane True series -- as good as it is -- has a history from the very beginning of being highly erased.  This time, the story is largely set in the U.K. which is a country, which is anything but White. and yet at best there is a mentioning in passing of a person of a colour.  There is no way to possibly justify the erasure, given where Peeler has chosen to set her story.

Peeler has taken care to have GLBT characters in her books, but unfortunately, they come down to gross stereotypes.  In this novel, we have the ancient Blondie, who is bisexual and her lover Sarah.  It is clear that the relationship between the two is very old and loving.  I liked the fact that their characters aren't particularly stereotypical; however, in the end, both characters died. To be clear, they weren't killed because of their same sex relationship; however, it still falls into a trope which we have noticed in the media of GLBT death.  Couples are not allowed to be happy and live their lives in the vein of straight couples. Something always has to happen where one or both die.

Ms.Peeler also has a penchant for using the word lame as a negative descriptor.  As a disabled person, I must say that not only is this unnecessary, it is ableist.  It is further troubling that there are no people living with disabilities in this book.  Though we know that Jane and Anyan both have a history with mental illness, it has been swept aside and this is not the way disabilities work. For them, it's not just a case of a long period of stability; it reads as though they have been cured. Our erasure is commonplace in this genre, as it seems that in a world where hyper abled (read:supernatural people) exist, there is no room for people who need accommodations.  A body that functions differently, is only acceptable if it gives the person the ability to move above the average, not below it.

Finally, let's look at the female characters in this novel.  Jane has grown a lot since Tempest Rising. She knows exactly who she wants and instead of rushing headlong into danger, she stops and thinks through options.  Jane is well aware that the world is ready to discount her because of her gender and size, but she does not let this stop her from doing what needs to be done.  Every single female character in this book is strong and intelligent.  I particularly loved that Peeler had Anyan point out that her father's ideas on men protecting women is archaic.

I won't say that I loved this book in spite of it's faults because the truth is, I not only loved this book,  I love this entire series.  Peeler has a way of drawing a reader into her world and keeping you guessing until the very end. The Jane True series is really some of the best of urban fantasy and I am absolutely distraught that book six will be the last of this series.  I feel that no matter how it ends, it will not be enough of this story.  Judging from the end of  Tempest's Fury, it's clear that Peeler will at least make the ending epic.