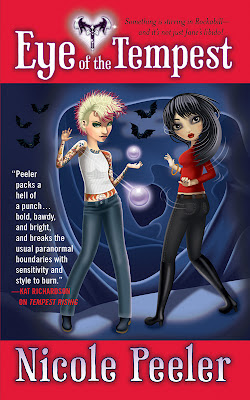 Shortly after arriving in Rockabil, Jane and Anyan are attacked by humans of all things. Anyan is almost immediately incapacitated, leaving Jane to defend them both.  Jane is aware that they took out Anyan first because he was assumed to be the real threat, while her size, her gender, and her identity as a halfing made her appear nonthreatening.  Jane grasps all of her power, despite being told not to in the past and draws all of the water out of their bodies.  Jane manages to save the day, but not without putting her life in extreme jeopardy.
Jane goes into a coma and while she is asleep, the blonde ancient that had helped her out in Tempest's Legacy, ingratiates herself with Jane's family and the super natural community by keeping Jane alive. When Jane awakes, she finds her father at her bedside.  She is happy to see him and shocked to learn that he is fully aware of the supernatural world, and Jane's role in it.  He admits that he always knew that there was something different about her.  He follows up this news by informing her that his heart ailments have been completely cured.  Though he loves Jane completely and wants her to stay near, he let's her know that it is okay for her to live her own life and leave Rockabil if she has to.
Unfortunately for Jane, her father's awareness of the supernatural world is not all she has to learn.  It turns out that some kind of power is drawing the supernatural creatures to Rockabil. This creature is ancient and has the potential to destroy the world.  Anyan informs her that the clues to the location of the creature are hidden within an Alfar nursery rhyme.

Blondie tells Jane that if the old one is released, its wakening will cause the destruction of the eastern seaboard.  To makes matters even more urgent, Jane also learns that the ancient will choose a champion and give that champion an enormous amount of power.  With a war coming, Jane, Caleb, Anyan and the crew, know that it is essential that this power not fall into the hands of the Alfar. For the first time, Jane is forced to realize that the split within the supernatural community is much larger than Jarl and Morrigan because there are factions forming across the globe. When Nell and Anyan are sidelined, a reluctant Jane is pushed into a leadership position.


Okay, I could tell you more, but that would just ruin the story for you.  This was a great roller coaster of a book. It was impossible to read and not cheer for Jane, though she is the most reluctant hero in urban fantasy.  Jane has always had a strong sense of what she wants, but in Eye of the Tempest, she is forced to confront what she is actually capable of.  The natural choice for a leader appears to be Anyan.  He has a lot of power, is physically strong and has experience in war.  Eye of the Tempest suggests that leaders and heroes can appear in the most unsuspecting forms if we let go of assumptions.  Those who actually want power, are probably the ones who are least likely to use it for the benefit of others.  Jane is unselfish, logical, thoughtful and empathetic.  These are all of the qualities of a good leader. I love that Jane participates in neither spunky agency, of Kellie independence.  She is sure of herself but not to the point of arrogance.

As great as this series is, Peeler continues to have a world that is not very inclusive.  There are no POC and the role of Tracy and Grizzie - the two lesbian characters, is extremely small. I think it would be fair to state that they are background characters who give the appearance of real inclusion. What is particularly troubling is that despite the lack of inclusion of POC, Peeler decided that it was absolutely fine to invoke racism.


Luckily for me, no one things I'm anything special.  I'm a hafling, and everyone assumes - quite incorrectly as with most racist stereotypes - that halflings are exactly what the name implies: half as good, half as strong, and half as necessary. [page 14]

To invoke racism when talking about supernatural creatures is extremely problematic and most surely a reflection of privilege.  Peeler has no idea how painful racism really is, or the difficulties that those who are bi-racial are forced to negotiate.  The above question is quite simply appropriation.

In Tempest's Legacy, Jane's succubus friend Iris was kidnapped and tortured by Jarl's minions. When Jane sees Iris for the first time she realizes that she is much changed.  I really liked this because far too often in urban fantasy, extreme things happen to characters and yet they wake up the next day as though nothing happened.  Iris is clearly suffering from PTSD and is slowly trying to rebuild her life.  I do however have a problem with Caleb being the one to draw Iris out. I am not sure if I am comfortable with love being the thing that saves Iris, even if she is a succubus.

As protagonists go, it's pretty hard not to love Jane True.  She is comfortable with her sexuality and never ever feels shame for the things that she wants, though the occasionally commentary from her libido is at times a bit over done.  Jane is loyal to her friends and has a strong moral compass.  Most importantly however, Jane knows who she is and in a world of vapid female protagonists, Jane stands out.