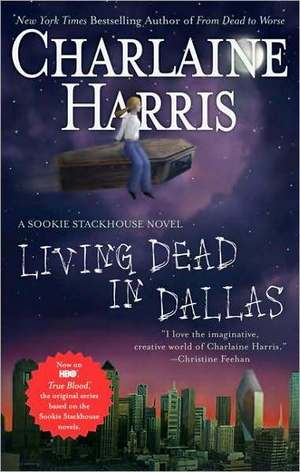 But she can hardly focus on that issue as she has another job to do – the vampires of Shreveport have hired her our to the vampires of Dallas to help them find a missing vampire. What begins with a simple reading of employee’s minds quickly winds up with Sookie up to her neck in a major anti-vampire hate group and one that has targeted her as well.

Of course there’s the ongoing problem of Eric’s attraction for Sookie, to say nothing of the difficult tightrope of having a relationship with a vampire in the first place. And then there’s the maenad, an ancient creature of incredible power, no rules and a passion for violence.


This story is interesting in that it felt like two stories one after the other. We start in Bon Temps with Lafayette’s murder, then move to Dallas seeking for Farrell then come back to bon Temps. The stories aren’t even linked yet at the same time the book doesn’t feel disjointed. I actually like how they’re both presented so separately – a reminder that issues don’t just arrive one at a time in neat little clues and just because something is happening in one part of your life doesn’t mean it has to be linked somehow to the rest of your life. I don’t see it often in books – either we have distracting sideplots or all the main plots tend to be linked somehow – it’s rare to see 2 equally dominant, equally important plot lines presented without them either encroaching on each other or one being a distraction to the other. It was well done and well balanced.

I also like the action of the story, it was well paced and ordered and every step was reasonable – nothing was forced, nothing was rushed and nothing dragged. Again, it was a nice balancing act. I didn’t see the actual betrayal and didn’t predict it at all – there wasn’t a confusing mystery but the steps to it were unexpected and surprised me.

We also had some nice elements. We got to see Sookie’s naïve joy of travel from such an inexperienced perspective, but it didn’t overwhelm the plot. It added flavour without being a distraction – as did Sookie and Bill’s relationship issues and arguments. They were there, they were realistic but they didn’t get in the way of the plot at all. There was a lot of little extras like this added but never in a clumsy or interfering manner.

We had some more world building being introduced in a natural manner with the maenad and the shapeshifters – and also more questions raised that weren’t answered – because not every question will get an answer, it’s even unrealistic for everything to be explained. Enough was shown to tell the story and to leave me intrigued and want to know more.

More, Farrell is picked out by Godfrey for the church because Farrell is “also a sinner.” Godfrey is a paedophile and child molester – Farrell is a gay man, yes he liked them young but his date was also expressly mentioned as over 18. To equate a gay man and a paedophile like this is highly homophobic – and is only exacerbated by the presentation that the only reason Farrell didn’t rape Hugo was because Hugo wasn’t young enough and that Farrell was chained up. All in all, it was a stellar example of how just having gay characters doesn’t make for good representation. We top it all off with Pam doing some more wisecracking and not much else.

There are several POC in the book, usually in side roles (or villain roles) but we have some good characters like Luna. Most are very small roles, albeit not stereotyped at least, but still very small parts. And there’s a whole lot of excessive Blackety Black Black description going on – as well as comparisons to many many food stuffs, chocolate, cream, coffee, and toast. Toast?

There are also a lot of throwaway racist and homophobic lines from various characters that are presented as “oh look how prejudiced these people/this area is” but it’s never ever challenged. I’m sure there are people now rushing to tell me that it’s rural Louisiana, what do I expect, but without even Sookie challenging these prejudiced words and thrown in with the actual portrayals, it’s encouraged and presented without question or criticism.

Sookie’s greater embracing of her telepathy and so much less emphasis on any problems she may have with it (I don’t believe she even had any) casts further dimness on the idea of her telepathy being a disability.

The Fellowship of the Sun is overtly compared to the KKK and there’s a lot of heavy appropriation going on with its presentation as an oppressive hate group and vampires as an oppressed minority. While we never loose site of how dangerous and menacing vampires are and how frightened humans should be of them, at the same time their rights are protected by a Civil rights lawyer and there are some not-very-subtle parallels made.

I do like that Sookie rejected Bill’s presentation of her as a “kept woman”. She is, after all, a woman who lives by herself, works and pays her own bills and Bill’s gesture was rather thoughtless. Unfortunately, after one argument about it she seems to largely forget all about it, accept it and then spend time justifying to herself why she should avail herself of  the free clothes, I am glad she is paid for her adventuring in Dallas (though I would have liked more formal acknowledgement of that another than the assumption that Bill will pay her) and I also liked that even surrounded by a nest of vampire strangers with their own agendas, she still enforces her own rules and her own standards. She demands to know what is happening to Hugo, she demands that the people whose mind she reads are treated well – it’s borderline Spunky but reads more as moral conviction than poor decision making. I don’t think Sookie is especially intelligent in this book (though occasionally the cast seems to have their IQ drained so Sookie can seem super-bright) but nor was she foolish.

She is kidnapped and rescued but I do like what happens to the man who attempted to rape her, do like that she was quite effective in protecting herself – but don’t like that there seemed to be a concerted effort to reassure Bill as much as there was to comfort Sookie.


All in all it was an enjoyable book and another fun exploration of the world, but it was rather fraught with problematic issues and moments that made me cringe. It was fun, it was interesting, it wasn’t glowing, but it was shiny.