Natalie Wilson is a literature and women’s studies scholar, blogger, and author. She teaches at Cal State San Marcos and specializes in the areas of gender studies, feminism, feminist theory, gender studies, cultural studies, body studies, and literature. She is author of the blogs Professor, what if…? and Seduced by Twilight. She also writes a column at Girl with Pen and regularly blogs for the Ms. Blog.
Do I think Jennifer Lawrence is a phenomenal actress? Yes. Do I delight in her astute, feminist commentary? Yes. Do I love of the fact she rejects the toothpick paradigm of Hollywood and proudly proclaims her love of philly cheesesteaks? You bet. But, I still wish that an actress of color would have been cast to play Katniss Everdeen.
The book describes Katniss as having black hair, olive skin, and gray eyes. More significantly, as argued by Alexiel at the blog Sanctuary, “the entire metaphor that runs through the book about oppression, hunger, and excess is meaningless if none of the main characters are people of color.”
The dystopian future documented in the novel is beset by extreme levels of inequality, with the Capitol functioning as the figurative 1% and the districts as the 99%. This wealth and power differential can also be read in relation to the Global North and the Global South, with the Capitol operating as an oppressive and exploitive seat of empire. As Alexiel notes in her post, the children of The Hunger Games can be read in relation to sweatshop workers and child soldiers of the Global South. Doing so, as she points out, stays true to the fact the book “was bubbling over with revolution – with images and ideas that were easy to analogize to the current world economic order and power structure.”
To be fair, the revolutionary aspects of the narrative are not lost in the film adaptation, but they are certainly watered down, and, more to the point, extensively whitewashed. Not only is Katniss white, the majority of people in District 12 are white, as these image convey: 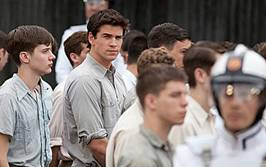 The casting, which problematically only called for caucasion actors to audition for the role of Katniss,  goes against the books clear description regarding the fact that District 12 is divided along racial lines, with the merchant class having “light hair and blue eyes” and the working class having “olive skin.” As Director Gary Ross notes “it’s a multi-racial culture.”
Indeed it is, but though he promised “the film will reflect that” it does not – at least not to a great extent. There are a few faces of color here and there, but the majority of the faces are white – including, crucially, those of Katniss and Gale, both described as olive skinned in the book.
In the film, one of the first images we see of the games is a young black male with a bloodied brick he has presumably just used to bash in the head of the tribute that lays beneath him. One wonders why the first time a black face is featured, it is done so in a way that furthers the “dark people are dangerous and violent” meme. Moreover, after Rue’s death, the riot in District 11 is instigated by a black man, presumably Rue’s father. Granted, violence permeates the entire narrative, and the districts certainly have cause to revolt, but why choose to show a black male braining someone with a brick on the one hand, and not choose to show MORE faces of color throughout the film on the other? As Renee noted in her review, “Throwing in 23 characters of colour in largely background roles does not count as inclusion.”
It makes sense, to a certain extent, to cast the Peacekeepers, the majority of the citizens of the Capitol, and the Career Tributes as white, especially if one wanted to make a point about white privilege and power. Yet, the film doesn’t really do this – instead, it uses white as the default race, casting not only the rich/powerful characters as white, but almost all characters as white, even the extras. The film is by no means the “multi-racial” film the director promised – instead, it, like the vast majority of films, depicts the world as predominantly white. As noted in the post “Racism, Hollywood, and The Hunger Games” filmmakers most certainly “could produce a movie starring a woman of color, make it epic, advertise it in the way it deserves… and make bank. Fact of the matter is they choose not to because… why would they? Having a culture where most of the people depicted in our media are white helps to maintain white as the norm.”
Posted by Sparky at 9:00 AM