Review: Circus of the Damned, by Laurell K Hamilton, Book 3 of the Anita Blake Series 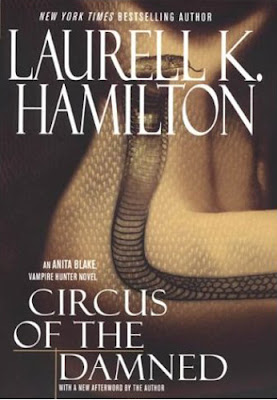 There’s a rogue master vampire in town – and he’s eating people with his vampire followers and casually dumping his kills publicly. He’s killing a new human victim every night – and Anita has to find out who he is before the kill count gets too high, a task that’s even more difficult since there’s only supposed to be 2 master vampires in the city.

Jean-Claude is on a whole lot of people’s hit list. Of course, as he takes the opportunity to bind Anita even close to becoming his human servant, even Anita starts to want Jean-Claude dead – and finally wants it enough to do something about it

Despite her busy schedule Anita also struggles to find time for a fledgling relationship with Richard – a highschool teacher of all things – and to train Larry, a new Animator. Unfortunately, she’s also dragged into Jean-Claude’s vampire politics – and the plotting of Master Vampires is never simple.

The story in this book is excellent, we have twist followed by twist followed by twist, it weaves into the side plots well and we have many clues and avenues of investigation – and then ends by turning it all on its head. Anita has to change her views and decisions as new revelations appear and it’s certainly not as simple as it first appears. All in all, it’s a mystery I like and appreciate – not a simple line but not ridiculously convoluted either

I do like the side plots in this book. Anita isn’t just working for the police, or up to her eyeballs in vampires – she does have some kind of life. She has her work outs with Ronnie, she has zombies to raise, she has Larry to train, there’s issues with Griswald falling into Jean-Claude’s hands, fighting the revenant in the vault. Sure, her work does tend to encroach in all of these areas – she is, after all, a workaholic with a hero complex who doesn’t want to see more of the bad guys victims (something that’s pretty clearly indicated in the books) but she does have activity outside of the main plot. And this serves to expand the world – especially in relation to what an Animator is and what it does (as well as where Anita’s income comes from. It’s pretty creative how many uses for the zombies there are and how that works as Anita’s bread and butter. I especially like it since so many Urban Fantasy protagonists either don’t work or have a job that directly parallels their investigation that it’s nice and unique to see a protagonist who has to argue to get time off to fight the vampires.

The side plots also allow the meta to continue and the ongoing themes to be developed – Anita’s job doesn’t stop because x drama has happened, Jean Claude doesn’t stop wanting Anita to be a human servant because Y is happening – issues from earlier books don’t just disappear.

I really like the writing style of this book and series for that matter. The internal monologue can be very funny is definitely amusing most of the time and helps explain most of Anita’s decisions – and generally makes them understandable and reasonable. I don’t think she’d be accuse of Spunky Agency without the monologue, but it does help dispel any possibility of it because her reasoning is sound.

Ok, it has issues – the descriptions are sometimes excessive – especially any descriptions of men. We can wander off into tangents at times and it does sometimes distract from what’s actually happening by inserting Anita’s musings about it instead. It’s a delicate balance that it doesn’t always maintain but generally doesn’t step too far outside. It also serves as a useful tool for worldbuilding – normally I’m against info-dumping, bur Anita’s semi-melodramatic internal monologues work really well to impart a lot of information smoothly. Sometimes it’s cheesy – but I’m not against a bit of cheese. It is edging juuuust a tad to the purple, but avoids it being too much.

There are numerous POC in this book – though except for Anita they are largely in very minor or villain roles. The excessive description issue is also continuing along with considerable “exoticness”. Stereotyping, in general, is not, however which is a good sign.

We have 1 lesbian couple – Yasmeen and Marguerite. Yasmeen enjoys tormenting Marguerite and cheating on her for shits and giggles. They also tag team Larry in a scene to convince him and the reader how perverted vampires are (a word that is used to describe Yasmeen as well). This couple also does not have a happily ever after by any stretch.

An element I like is how well the hate groups are done. As we’ve said before, fantastic prejudice does tend to include a lot of highly questionable appropriation of marginalised people. Yet HAV and Human’s First is portrayed correctly – they hate vampires (and Anita for being a Necromancer) but at no time are vampires presented as being an oppressed minority – even when discussing the legal rights they don’t have, there’s no suggestion of them being weak or oppressed or persecuted. They’re always viewed as threatening and dangerous as they are and are never compared to actual oppressed or persecuted minorities. They’re hated, they’re attacked – but they’re not oppressed.

Unfortunately this also runs alongside comparing lycanthropes to AIDS carriers – which is certainly appropriation.

Anita herself remains a pretty good character. She’s tough and resistant. She stands up to Edward even when she partially agrees with him simply because she won’t be bullied. She stands up to Bert regularly and happily, in fact there’s no-one this woman won’t stand up to (including Jean-Claude) yet in this book she hasn’t ever just been angry and defiant for the sheer sake of it. She’s always had a reason to disagree, a reason to stand back and refuse. She has her powerful combat skills but she’s not quite invincible, she makes mistakes but they’re not unreasonable, she makes decisions and while they’re sometimes wrong, they’re usually based on a foundation of decent reasons.

While I’m glad we don’t have instant true love with either Jean-Claude or Richard (either of which would annoy me because I’m tired of it as a trope), Jean-Claude’s “persistent wooing” of Anita is getting skeevy. I can understand persistently pushing Anita to be his human servant because she I marked and weakening his power base by not being so – but constant attempts at seduction after Anita has said hell no is skeevy – and I wish it were pointed out more.

All in all, a good all round book with few faults and some truly wonderful qualities, I’m reminded again why I loved this series so much.