Being Human Season 2, Episode 12: Partial Eclipse of the Heart 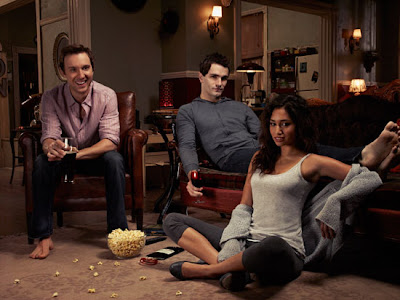 Sadly, with everyone doing their own thing again I’m splitting this review down the character lines. I wish they’d have a more integrated storyline and actually be together more.
Aiden
So Henry has caught up with Aiden doing a runner and he and his 2 friends managed to take Aiden down awfully easily considering Aiden’s skills – but don’t worry, Henry is still Team Aiden and helps kill the other attackers, saving Aiden’s life.
Henry has been in hiding for a century and is confident he can help Aiden avoid Motehr but only if he dumps Suren – which Aiden won’t do. He even points out that this exile, this freedom is exactly what Aiden wanted – except for his love for Suren. And where did that even come from I have to ask? We seemed to leap from Aiden barely tolerating Suren’s presence to full blown infatuation-willing-to-die-for her. Aiden stabs Henry to give him a cover story to get back in Mother’s good graces
Suren doesn’t want to stay cooped up in the motel and she’s hungry for blood. She says she’s tried of being treated like a damsel by Aiden – but it feels less an assertion of strength and more whining to get her own way. She also wants to go back to Mother to save Aiden’s life – again, it feels less like noble sacrifice and more like petulant dislike of her current circumstances.
Aiden visits Amish county where the Vampires of the Corn await. He wakes Adley, the vampire who he allowed to take the credit for killing the pureblood werewolf (which, of course, Aiden killed while Adley fled) – he wants sanctuary with them. He also points out that Mother has done very little to support or help them. But to convince them that he’s not a heretic, Aidan has to provide fresh blood dinner for the evening.
Aiden returns to Suren – but Suren has returned to Mother
Josh
Josh is dreaming about the man who made him a werewolf – and Nora’s revelation that he can stop being a werewolf if he kills the man who turned him. Of course, in going to scout on Ray in real life he finds that the man has a family, he has won his wife and son back. This turns into Josh talking to Ray and at least appearing to reach out to him – except he says he’s the only one like him he knows, but Josh has met a fair few other werewolves. Ray encourages him to tell Julia the truth about him being a werewolf as he has to his wife, Val.
He talks to Sally about telling Julia about being a werewolf (we briefly discussed Sally’s issues but we can’t maintain that for long).
And he’s having a cosy relationship with Julia but faced with the dire terror of Chelsea – Julia’s best friend who refers to Josh as the Demon-man-child-who-ruins-lives. I’ve said it before and I’ll say it again – while they didn’t know Josh was a werewolf, they did know he’d come through a horrendously traumatic near-death experience in which he saw his best friend murdered in front of him – yet they don’t seem to give that any consideration when wondering why he ran off.
And Josh is faced with whether Julia should tell Chelsea about them or not – especially after his Nora vs Julia debate last week – and if she tells Chelsea she will end up telling everyone. He shows up and they make their peace over a bottle of wine. Chelsea is also a wonderful best friend.
I have to say, with Sally dealing with the fallout of murderous Reaper multiple personalities and Aiden on the run from murderous vampires, and even Josh having to deal with murdering the man who turned him - Josh having to deal with his girlfriend’s mean best friend is… of rather lesser impact
Then the solar eclipse happens – and Josh begins turning into a werewolf. And after a chase, Julia sees his fangs and claws – and backs off into traffic and is hit by a car.
Josh sees Julia injured by the side of the road and Josh gets to tell Julia he’s a werewolf. I always love how they always say “why didn’t you tell me” exactly HOW do you tell someone you’re a werewolf – how do you even say that and be believed? Then he sees Julia being put in an ambulance – she’s dead and talking to her ghost – and she gets her door.
Sally
Sally is looking for Zoe and finds that Zoe is not best pleased with Sally at all. Sally is trying to convince Zoe that she’s getting better and she was sick before. But Zoe has lost all faith in being a medium and the gifts it brings – it’s caused so much pain that she has turned her back on all ghosts.
Sally is now working on trying to get Zoe to not give up on her gift. Then the solar eclipse happens. And the ghosts Sally reaped come back. Zoe realises she has a chance to see Nick again.
When she returns to her house she sees Nick and she learns that ghosts being reaped go to limbo which is a terrible place to be. And Danny is also back and even he is happy to see Sally because it is so bad in limbo. Danny even accepts he deserves to be in limbo – and that there are people in there who went through the wrong door or were just “undesireables”
Knowing he has only a few minutes left, Nick tells Zoe he’s at peace and happy.
Now that was a powerful scene and far more emotional than any of Aiden’s Hooty moments.
I still feel like this series is kind of rambling along. We’re tying up some loose ends but I feel the story ended 2 or 3 episodes ago and we’re just coasting along now filling space and filling time.
Posted by Sparky at 3:00 PM