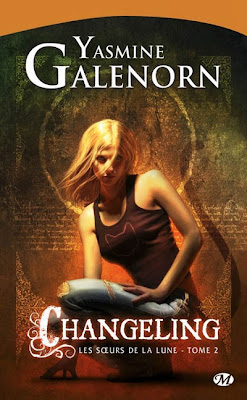 The sisters ongoing battle against the demons continues as Shadow Wing’s forces look for the spirit seals, a way for them to break through to Earth and, from there, break through to Otherworld as well. The fate of both world rests in the balance and the D’Artigo sisters make a thin line of defence.

They have only a little support from the Queen of the Elves, because Otherworld has it’s own turmoil. The fairy queen, Lathanasar, has become more erratic and cruel, her increasingly failed rule has now lead to outright civil war, dragging in the other forces of Otherworld and destroying or occupying the agencies that should be helping against the demons.

Into this we follow Delilah, the middle sister, cat shapeshifter and private detective (her cover job, at least). She’s approached for a case – a local werepuma pride is under attack by an unknown murderer and her and her sister’s skills are needed to track it down – becoming all the more urgent as the bodies pile up and there’s a clear link to Shadow Wing’s campaign. Along the way she has to make some deals with some terrifying entities, Elemental lords of extreme power that untap some long dormant power within her.

And she loses some more of her innocence, some more of her naivety and is faced with more of the cruel, stark reality that faces them in this war – to say nothing of the complications in her love life, with her polyamorous nature clashing with her human boyfriend

This world is huge – with 3 realms of beings, a million kind of fae, shapeshifters, demons, vampires and many variations of each, it’s a world with near infinite diversity. I could spend hours just pouring through the world building alone. Part of this is because each element seems to have some weight, there’s not just werepumas, they have their own society and customs and it differs depending on whether they’re Earthside or Otherworld. The vampires aren’t just vampires, they have their own meetings and difficulties. The kingdoms of the fae and the elves have their own cultures and depths. There’s a weight behind the world building that suggests a lot of work and preparation has gone into it beyond just names and labels.

And that full, rich world with all its possibilities and magic feeds directly into the story. We have epic forces and a thousand options and a constant idea that anything can raise its head. I do think the action scenes were a little truncated and could have been less anti-climactic, but following to them is interesting as we learn more. It’s not the most novel concept – find the bad guys, save the world – but the path there is original because it wends through so many different characters and so many fantastical diversions. It isn’t a mystery – there’s no questions and little investigation, it’s more a hunt, a battle and an exploration and they become ever more deeply involved in a much wider and larger meta-plot.

The characters are also very full and real. They have an excellent relationship with each other – friendly and warm and touching. They make decent decisions and I haven’t torn my hair out from spunkiness once. They have their difficulties and challenges but they face them together, united and strong rather than constantly diverting, they’re sexual without shaming and polyamorous without guilt – though there’s a lot of jealousy going round. I like these characters, they have a strong realness about them

The main problem I have with this book is the severe lack of urgency on the part of the D’Artigo sisters. Someone comes to them with a case where someone is dying almost every day and they schedule them in for the weekend. There’s a lot of scenes where they sit around waiting for Menolly to wake up, which I can understand wanting to include her, at the same time when there’s a matter of urgency, twiddling your thumbs

And there’s a lot of time spent on their mundane lives – eating, shopping, talking, eating, seeing the love interest, eating, talking some more, eating, telling stories, eating. Did I mention eating? They spend a lot of time eating big meals and lots of snacks – but I can understand that, since they only actually eat breakfast and then lots and lots of snacks and sandwiches. It’s nice to see these elements of a character’s daily life – but not so constantly.

Especially since the characters seem so very laid back. Oh they’ll spend lots of time worrying and fretting, but there’s no urgency to them. They don’t just eat breakfast, they’ll take their time. They’ll make long plans, they’ll pause to play with the gargoyle, they’ll have some small talk. When going somewhere, they will mosey along quite happily – and it’s just that, moseying along to save the day. Not charging, hurrying or even hustling, it’s more like a gentle saunter.

Which is exacerbated by the number of relationship conversations they have (Camille and Delilah really bond over her worries about Chase and Zach) which are great in and of themselves, but they do tend to have them at the most inopportune times. Which is further made worse by Delilah’s own mental rambling – because she’ll get distracted. While they’re discussing and recapping to each other about the big bad issue, Delilah provides her own mental commentary that can wander at times.

The problem is, when you put all of this together, it detracts both from the tension and the epic of the book. The very fate of the world is supposed to be in the balance, untold billions of lives could be lost – this is supposed to be pretty urgent and epic and it’s detracted by this lack of character urgency.

We do have some GBLT inclusion with one gay character who is more than a little stereotyped (and only appears extremely briefly and unnecessarily) and a lesbian who is tragically closeted (and oh-so-very lonely). We do have a lot of bisexual characters – but the relationships we see with them are over and over again with the opposite sex. Racially, one of Camille’s boyfriends, Morio, is Asian, but while he is often present, he isn’t often a major force in the story and is usually hanging around in the background.

The story is great, the world is probably the richest and most diverse I’ve ever seen and the characters are strong, interesting and compelling. It has all the ingredients of not just a good book, but a truly great book – if only it had a little better pacing.