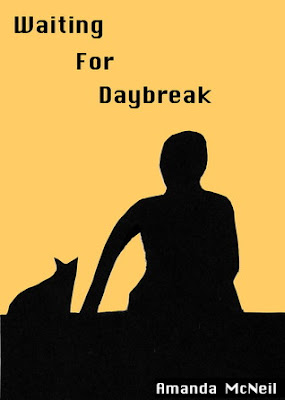 Freida had a difficult life. Living with mental disabilities, she had a hard time negotiating the world and, especially, the people within it. It certainly seemed she’d hit one of her low points after a particularly awful date sent her into disassociation, self-harming and depression.

Of course, if she hadn’t been in that low, she’d have been outside when the zombie apocalypse began, rather than in bed reeling from depression. She would have been like the rest of Boston – perhaps the world – roaming around seeking brains to feast upon.

In the greatest irony, she almost seems to be thriving far more in this new, bleak world than ever she did before – just her, her cat – and even a love interest who doesn’t seem nearly as awful as her last real date. Perhaps they can carve their own life in world of zombies, despite every day being a battle to survive under constant threat from the Afflicted

When I picked up this book, I had reservations. It’s a very short book, especially for something not part of an ongoing series. It seemed too short to be a self-contained story in and of itself.

So I was wonderfully surprised by the masterful pacing that made this book and this story exactly as long as it needed to be. We had plenty of flash backs of Freida’s life to have a greater idea of her as a character and her history of mental illness. We learned enough about her to flesh her out as a person, to get an idea of the outbreak and what happened to her and how she survived – but not so much that it was extraneous, padding or unnecessary fluff.

Similarly when she met Mike and had a relationship, we had enough information and scenes to see the shape of it, but not so many that we were drowned in excess detail that bogged the story down and turned it into a romance. We didn’t learn much about Mike, we didn’t need to know much about Mike. The story was a extremely well done balance –neither too much nor too little.

Which covers most of everything in the book – the action scenes were exciting, lasted long enough that you didn’t blink and miss them but not so long that you were tempted to skip forwards; they were well described enough to get a sense of what was happening, without being so over-described that it felt like the fighters were actually taking notes. This whole book just hits the sweet spot – that perfect balance between too fast and too slow, too much description and just enough, too much world building and backstory, and not enough

I also love that Freida is every bit as much an action hero as Mike in this. In fact, when she finds Mike, he is surprised to see her kill zombies with a knife when he has been using a gun. She is the one who tells him you can kill them by stabbing them through both eyes and bashing their head in – she’s the one who has been getting up close and personal with the zombies while he’s been taking them out from a relatively safe distance.

This book is relatively unique by having a disabled person as the protagonist. She is neurologically atypical, mentally ill, suffering from depression, paranoia and obsessive tendencies. Since we see things through her eyes we actually have an excellent portrayal of what that can mean and how those can manifest – as well as what she does because of them. We get her anger, her emotions, her thought processes and the difficulties she faced in the world – and continues to face.

But even better than a realistic and well-presented depiction of mental illness, we also have it become a strength in the zombie apocalypse. Not in the usual ways of urban fantasy, she doesn’t “rise above” her disability. Nor does she develop super powers that are linked to her disabilities. But her habits and thought processes through her disability – her paranoia, her constant worry, her caution, her contingency planning even her heavily bottled anger all come to the fore and are strengths in the zombie apocalypse.

Not that her symptoms disappear – not at all. And Mike, as another mentally ill man, shows clearly that the disabled do not become the people magically able to cope in a situation where most people could never cope. He does fall apart and cannot handle it – his suicidal depression doesn’t just disappear because zombies are now around.

What’s also apparent is that part of the problems both Mike and Freida faced stemmed not directly from their mental illnesses, but from the ableism they faced. Part of Mike’s suicidal thinking comes from the powerful believe that he is abnormal. A lot of Freida’s anger and pain and self-hatred came from the way people treated her and her “caring too much” about other people. Part of the reason why Freida had to bottle up so much pain was because of the people around her. Part of the reason for her episodes is her poor treatment at the hands of others and her constantly second guessing herself in relation to how others react (as seem really clearly through her flash backs). It’s a nice added dimension to the story that adds greater depth

As a book that only has 2 humans in it, it doesn’t cover any other minorities either, though  it is overtly made clear that not all the zombies are Caucasian, so there’s an acknowledgement of past diversity – but with only 2 living people there’s a limit to the scope of inclusion anyway.

And I liked that she had Snuggles her cat. I know it’s intensely impractical, but who would just kick out their pets in a zombie apocalypse?

I loved the book, it was a fun read with great characters and a little more depth and a new angle over so many other zombie apocalypse books. Do I think it’s going to be a good series? I don’t know, nor do I know if the author intends to. I find zombie apocalypse books can be shaky in a series since there’s a limit to how much you can continue the “and then I fought and ran from zombies!” theme unless you have something unique. And this book, I think, does have something unique – both in the characters and as a single survivor, which is almost unprecedented.

Whether alone or part of something more, it’s a great read and I heartily recommend it.

You can buy the book at: Amazon,


And you can contact the author in the following places: