Review of Frayed by Blakely Chorpenning: A Madison Clark Novella 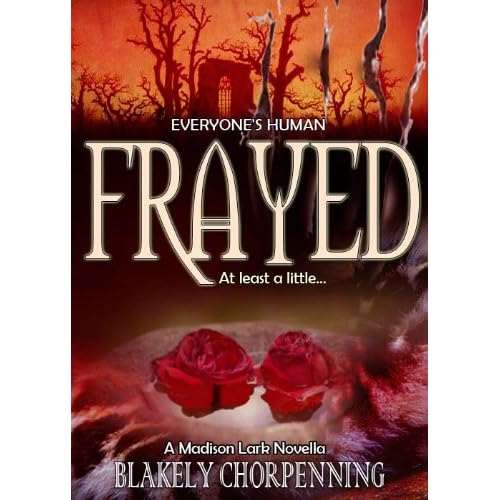 The shifter community is in an uproar because their teenagers seem to be missing.  Because there is little communication between the leopards, weres, etc., it has taken sometime for them to realise the breadth of the problem.

Fray is a mixed martial artist who loves and lives to fight.  Her brother assigns Fray to investigate the disappearances with Nash - a vampire. Fray is not at all pleased as it seems that distrust not only extends to other shifters but to the undead as well.

Chorpenning has a large world with various types of shifters, as well as vampires. The cast is filled with mixed race people, which is a nice change of pace from all White worlds.  I do however think that despite being told that Fray had a paternal African grandmother and typical Black features, there were no markers other than description to mark her as a person of colour.  The same unfortunately occurred with other characters.

Fray is yet another character in this genre who has zero impulse control, no respect for authority.  She ridiculously allowed herself to be captured without much forethought.  I found it very hard to like Fray mainly because I am tired of seeing this kind of woman in urban fantasy. Why is it so hard to have a character who is capable of having a conversation without flying off the damn handle every two seconds. She hardly behaves like adult woman she is supposed to be.

Novellas are risky balance because the author has to be careful to include enough to keep the story while at the same time not overwhelm the reader.  Frayed is an introduction to a series and really, it should have been a book and not a novella. Chorpenning rushed through details and introduced far too many characters for this to be easy follow. At times, the story felt like it was all over the place and this was particularly so when it came to the action scenes.  If you have no real awareness of who the characters are it's hard to follow who is doing what and why. The pacing of Frayed gives the reader no chance to really connect with the characters or have a reason to invest in them.

I would have been far more interested in this story has Chorpenning had taken the time to really develop the world rather than rushing through this story. She skeleton of a story but never really fleshed it out enough to make the reader want to read more or care to be quite honest.  If anything Frayed could be best described as failure to launch.

Editors Note: A copy of this book was provided by the author for review.