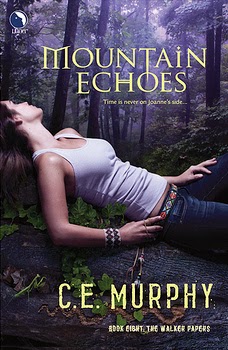 Joanne has barely had time to process what happened in Ireland when she receives news her father is missing. She quickly returns to North Carolina, to a place she hasn’t been since a child, to discover not only is her father missing, but so is the man who fathered her child.

He Master is there, seeking to tap into the devastating pain and loss suffered by the Native Americans to power evil beyond imagining; unless they can stop it.

But also there are the people Joanne long left behind, not all of whom are that willing to welcome her back, even if she has finally embraced her legacy of a shaman. There’s also Aida, the son she gave up at birth and a powerful shaman in his own right – and a source of both emotional and mystical turmoil.

Joanne has, in many ways, completely her journey of development in this book and the last book. Last book she confronted so many of the issues she had with her mother – and this book she does the same with her father and with Aidan, the son she gave up for adoption. It’s not easy, there’s some heavy emotional content there, but it’s handled in a very reasonable and mature level – no dramatic angst, not seething rage, no losing their sense of priorities or avoiding the actual plot and disaster they are facing. It also reflects Joanne’s personal growth – she has finally decided to put away her desire for an instruction manual – because she has been doing this for some time now and she’s been managing and achieving great things. Joanne acknowledges her own skill – her own mastery. When her dad does things differently, she accepts that they do things differently, not better or worse. When she does something her dad says is impossible, she doesn’t think she’s doing something wrong, she just knows she does something different from her dad.

Joanne has reached an excellent point where she is willing to learn from others, but not feel inferior for it and not feel like she has to do anything their way – while still being confident in her skills and her achievements and finally settling on the idea that she is strong, she can do things others cannot and there’s no problem with her doing just that. Even if it is unwise at times. It’s a wonderful development after books of denial, books of panic, books of her messing things up epicly through ignorance and confusion and now her finally reaching the end of that path. I love her growth

Not just with magic – but relationships as well, recognising her old problems, her old grudges, when she was often unfair or unthinking or how her perception was skewed. Through a more mature, wiser eye, Joanne looks back at herself and her old home and a fair whack of complex feelings about it

Along with that we have Joanne and Morrison, though I think we will find more in the next book, finally delving into some of the issues and insecurities he has, seeing more of his growing comfort with Joanne’s woo-woo and them really spending some time together and forging a stronger connection. I particularly liked the role that professional ethics played in keeping them apart – because while Joanne worked for Morrison the relationship was impossible and, in turn, that seemed to make Morrison try to keep some more distance between them and, perhaps, not experience the joy of Joanne’s powers as much as he did in this book. Because his relationship with Joanne – and her woo-woo – had to be professional he got all the creepy side of what Joanne could do, all the useful side, but not so much of the amazing, awe-inspiring side.

I still have a major problem with how the magic is written about in this series. It’s been a problem since the first book and though it’s got better, it has never gone away. We can get lost in the description, in following the action of this abstract magic and it can become confusing and get us very very lost. There’s a scene in this book where Joanne first confronts the big bad and it starts epic. It goes on for a while still epic. Then it’s still epic. Then I check my watch and the epic is wearing off, but the scene keeps going and they’re winning no losing no winning no… it goes on and on and then BANG people are dead. And I’m not exactly sure how or why or whether Joanne was awesome or awful or both.

Later it happens again where we get combat combat BANG TIME TRAVEL (the multiple time travels in this book also add to levels of confusion that really didn’t help) and I’m lost again because I’m drowning in a sea of description and abstract. Even the end game battle is damn hard to follow. Which is a crying shame because these moments are some of the most epic in the book (beyond the flying car) and should be the pinnacle, but they lose me – which means losing me at the worst possible time.

The book generally reads well – the story isn’t particularly original (it’s another battle against the Master doing nefarious things with woo-woo) but it’s exciting and moves well with enough unique twists to keep it worthwhile – especially with the excellent characters to focus on. But the writing does derail on those woo-woo moments.

This book has a lot of research about Native American, specifically Cherokee, history and a very strong sense of culture and place. There is a lot of woo-woo and woo-woo awareness, but also an overt acknowledgement that not all Native Americans are following or participating in these rituals – and to many who do it isn’t because of woo-woo, belief in woo-woo or more than tradition. There’s an attempt to distance the idea that Native Americans are inherently woo-woo while focusing primarily on woo-woo.

The impact of the atrocities inflicted on the Native Americans is not soft peddled nor sugar coated – but presented as the horrific genocide it was, a genocide that caused so much pain and loss that it was beyond devastating – this book doesn’t flinch once away from that and drives it home heavily and poignantly. It makes the references to it in the story pertinent and respectful, rather than feeling gratuitous or exploitative. There are also a lot of ongoing issues reflected in the story – including things like understandable distrust of the federal government

I was also pretty happy with both Ada and Sara. Both these women (Aidan’s adoptive mother and the wife of Aidan’s father) are classic candidates for “reasons why all women hate Joanne!” characters which so dog this genre. But they’re not. Oh they’re not her biggest fans, not by a long shot, but they’re mature, they handle their issues and they support Joanne when they think she’s right and everyone just behaves like reasonable adults. How very very refreshing.

Unfortunately, there are no LGBT characters.

This book is coming close to the end of the Walker Papers and I have that horrible feeling when a series I love is starting to die on me. Part of me wants to yell that the series has so much more to give – keep it going, keep it going! Which is an excellent sign a series has hooked me; but, equally, I can see why and I appreciate how the last two books have really helped Joanne grow into a full and complete person. It brings home that this series, for all its woo-woo and epic world spanning plots, is really focused on Joanne’s personal story and as we reach the end, that story is reaching a nice, fulfilled satisfying end, which I appreciate a lot

But I’d still like to see her keep kicking arse and being awesome into the far future.