Ensnared by Magic (The One Rises #3) by Anna Wolfe 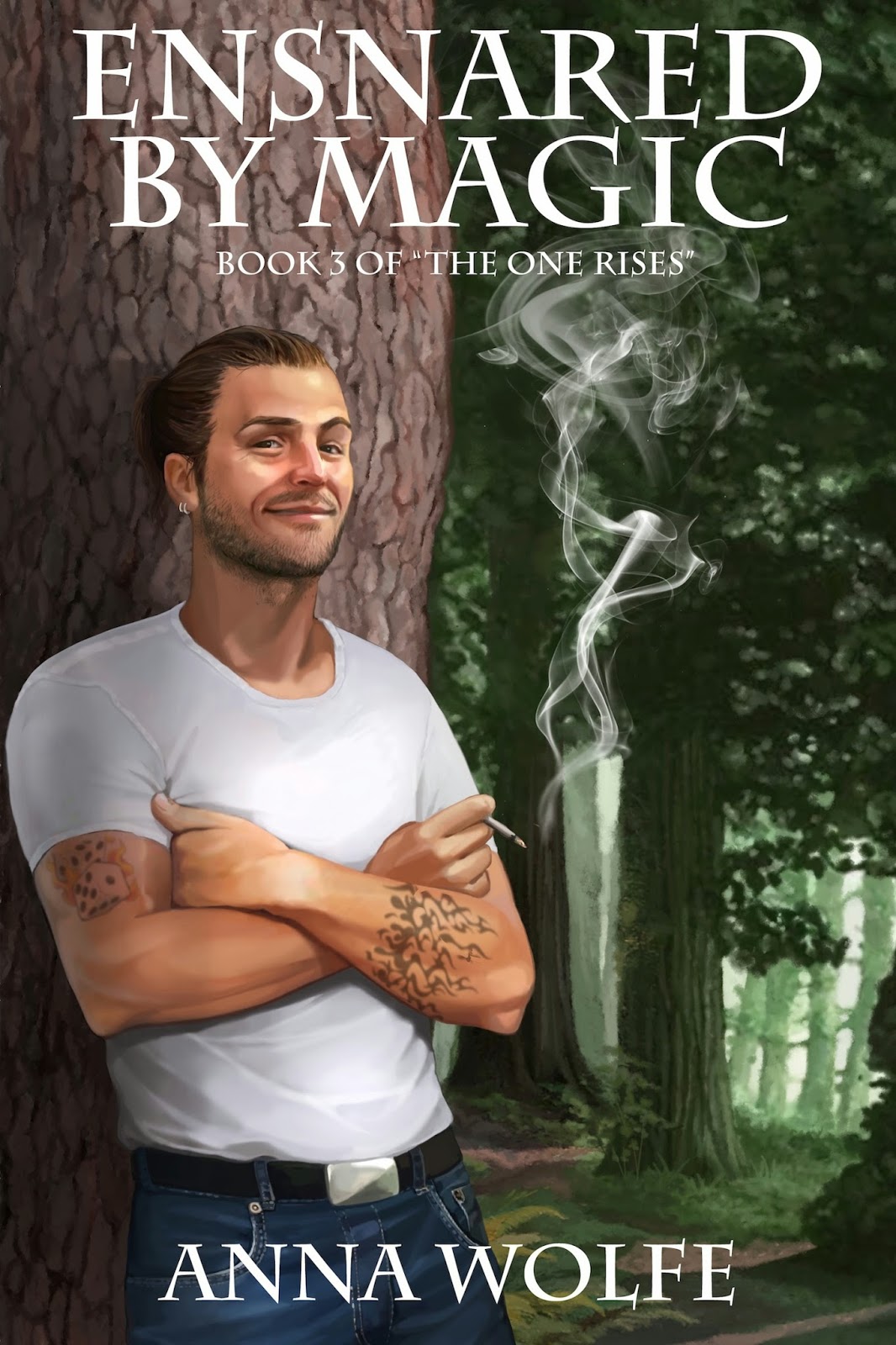 Mark has to spend some time with the witches as a consequence of a very unwise deal he made. Of course, he never expected a flirtatious witch – witches generally hold Bitten, humans bitten by Demon Ridden – in the highest contempt

Now, with a badly misaligned spell and witch politics feuding between the High Priestess and the Seer, it falls to Silas and his band to try and cover up this disaster and restore some sense of order.

I love this series of books, the first two were excellent and introduced me to this fascinating world that has well and truly hooked me in. I love the characters and I love how the shifting points of view lets me see all of the world, each other and the story through shifting lenses that expands everything with an extra level of richness. The writing hits that perfect balance being descriptive and emotive while still keeping the plot and story moving with any info-dumping nicely integrated into the text

I loved the first book, really loved the second book – and really looked forward to this one

And was a little disappointed. Not, I hasten to add, because it was a bad book! No no, not at all, not even remotely! But because my expectations are high and this book didn’t reach the heights of the previous two.

There wasn’t a lot of plot to this book. The witches are up to something that involves the One, but I’m not sure what nor is it completed in this book to add any clarity. Both the mysterious Seer and the, apparently malicious, High Priestess can see the future, so the events they manipulate are all about some long running plan we don’t know about. The witch shenanigans go wrong and we spend most of the rest of the book containing the wrongness.

It’s not bad – but it’s a middle of a longer plot. The beginning – why they’re doing this etc – is missing as is the ending of this actually achieving, so instead the characters I’m familiar with just drop in in the middle of an Event which hooks them in without any real explanation, resolution or depth.

This jumping in the middle also makes it really hard for me to connect to Mimi, a character we’ve only seen briefly in the past. Now there’s a lot from her point of view and I can’t connect with her – I don’t understand her motives, I am not invested in her in a character sufficiently to follow her this closely and, perhaps worst of all, we’re seeing her on her worst day. It’s not that I don’t care about her – I do, I care about her facing consequences, I care about her facing comeuppance. I read from her pov and wait for her to fail out of some kind of vicious schadenfreude – I want her to fail, I think she deserves to fail I look forward to her failing and when she faces pain and difficulty, I don’t empathise with her, I rather cruelly think “this is richly deserved”. Which probably says terrible things about me.

This also extends somewhat to Jiye, Mimi’s girlfriend. Do I think Jiye has every reason to be ragingly pissed? Definitely! Mimi’s treatment of her is outrageous, Mimi is grossly disrespecting her love, their relationship, her loyalty and making Jiye and her pain a very low priority in her life; if I were Jiye I’d be ragingly furious – with Mimi. But Mark, seduced into Mimi’s bed under a false agenda, drugged and then used for magic, is another of Mimi’s victims – and Jiye’s victim – and Jiye’s rage at him is repugnant.

This meant while I absolutely loved the revelations of Silas’s past (and there was so much awesome Silas growth this book and some really excellent history of the world and world building that I just wanted to dive into it all and tell the witches to take a hike) and the difficult choices he has to make, and I loved Edie and her battle to carve out of her own life and the difficulties she has with Hatter and I even liked mark and learning more about him, I ended up wanting way way way more Callie (who was not very present) and spent way too much time glaring daggers at the book when Mimi appeared.

One element that keeps coming up in the series in general and definitely in this book is consent – especially sexual consent. Many of the demons have the ability to feed from sex – and by “ability” that means they have to. Usually when we get some kind of woo-woo that forces characters to have sex I cringe because it’s usually presented as sexy in some way: even if the protagonist resents it, it’s still all kinds of sexy and even used as a chance for personal growth (or for the character to have lots of sex while still being “pure” because they “didn’t want it.”)

This book doesn’t do that – it continues the same theme as the last book where the Bitten try to work around the sex they are forced to have, hating it, often making it as clinical as they possibly can and trying to avoid any kind of glamorisation of it. Silas tries to distance himself and de-entangle himself from the students who develop crushes on him or any emotional attachment – and is made very uncomfortable by the whole thing. Callie herself tries to distance herself emotionally and is frustrated by her sexual desire linked to feeding.

They are all very unhappy about the necessity of sexual feeding – but that doesn’t mean they are not sexual beings; Mark is certainly sexual, Silas is sexual and Callie seems to be developing sexually all without hang ups shame or anger about sex – just the sex they have to express. Edie is not only sexual and takes great pleasure and fulfilment in sex, but she has managed to carve for herself a relationship – a consenting, mutually respectful relationship. And Edie is the one with especially problematic power – feeding on devotion and quite literally enslaving and killing people if she sleeps with them too often too close together. Again, this is presented as a terrible power – and one that Edie has to live with – but also one she works around that to make sure she can have her relationship with Dyshawn and make it mean more than feeding - refusing to be alone because of her power.

Consent is further pushed with Hatter – a man who makes the terrible choice to succumb to Edie’s power rather than allow the darkness inside him control him – and the terrifying power he holds. This raises a whole lot of complexity of consent and agency, as they are both forced to make this terrible choice by circumstance, but ultimately both make a choice – and then Edie’s walking the line to help Hatter while still allowing him as much free will as is possible. The book does an excellent job of making it clear this is a terrible choice to make and a horrible burden to take on – there’s no romanticising of it and no attempt to sweeten it. Consent is violated, it’s not fun, it’s not pretty and it may be the best of bad choices but it’s still a bad choice.

Even with the witches, elements of consent are raised; Mimi and Jiye’s relationship is badly abused by the manipulations of Mimi’s mother, the High Priestess. It’s clear that Mimi wouldn’t have sought sex with Mark on her own, being a lesbian (and it’s expressly stated she’s a lesbian, not bisexual) and being in a committed relationship – and Jiye is very very VERY clear how not happy she is with Mimi sleeping with Mark, begging Mimi not to do it. Jiye’s rage and Mimi’s own grim resolve partially shows  the wrongness of this violation of consent – but at the same time Mimi pushes ahead and seems to enjoy things quite vigorously which is not only troublesome with the consent – but highly problematic with her being a lesbian

One huge element of the book I couldn’t run with was the treatment of Mark by the witches. It wasn’t so much how they used him – or the obvious contempt they felt for him – that all worked in light of the witch/demon history and the prejudice that witches have against the Bitten. What I couldn’t follow was how relatively calm Mark was with the whole thing, especially as someone who moves off anger as much as he does. He’s not enraged, he’s not outraged by their use of him, by their violation of him and by their risk of him – he even seems to be on relatively friendly terms with some of the witches who used him. Nor is Silas, or anyone else, angry on his behalf; no-one is upset by his treatment. As a reader I found it extremely frustrating – because I found it outrageous, I was angry on the character’s behalf, and I was waiting for some of them drag the witches out on the carpet or chew them out or something – and it didn’t happen. This lack of consequence adds to why I dislike Mimi so much – if she faced some push back for her actions I’d feel less invested in seeing them bite her on the arse.

We had a number of POC in the book – Edie, the Seer, Dyshawn, the seer’s apprentice Theo, Jiye and suggestions of more to come with the much referenced spider. The Seer, technically, fits the magical wise Black woman stereotype in theory – but she’s a witch. Everyone in this book is a witch or demon so the woo-woo is less about singling her out specifically. Jiye is also something of a “dragon lady” but, again, she has an IMMENSE reason to be furious – albeit not with who she is furious. Edie and Dyshawn are free from stereotype and are excellent characters I want to see more of.

The witches got in the way, but I still liked this book and, with what it started in the earlier books and developed more here, I cannot wait for book 4 – this is a definite must-read series.