Addicted (The One Rises #2) by Anna Wolfe 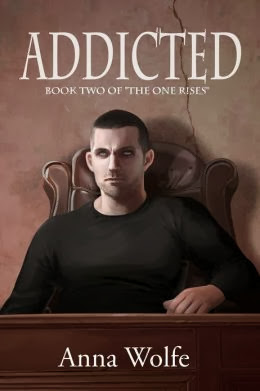 Callie has found the Bitten and is now learning how to harness her abilities and learn all the things she needs about the world she has found herself in. Some of it is fascinating, a lot of it boring.

But Callie has reached the attention of Phaedron, his group and assorted allies pretty much united in their dislike of Silas – and Callie looks like an ideal tool with which to strike against him. Indeed, even Silas’s seeming growing affection towards Callie may consider it to be a weakness.

Other groups have laid their snares as well, and Edie finds another net laid for her and Silas through one of her close contacts.

This is one of those reviews where I want to point to my review of the first book and say “ditto”. This is always a problem of reviewing a sequel when the author is consistent.  Like the first book, I found the characterisation, the world building and the writing excellent. The pacing moves well, the story is exciting and intriguing.

Like in the first book, this book has a lot of POV switches, we move from character to character and get their impression of what is happening around them, what they’re involved in and the other characters. Again, I have to say that POV switching is normally something I despise since it forces an almost all-knowing narrator and is often clumsy and repetitive. This isn’t – when the POV shifts it doesn’t rehash what has already been made clear. The POV isn’t used to make grand revelations but nor do we have convoluted situations where characters manage to keep secrets they shouldn’t be able to while we are in their heads. It’s really well written, really finely balanced and really works well. It serves to do an extremely good job of fleshing out all of the characters and making them all strong and with their own agendas.

It also means characters that, in most books, would be relegated to side roles, particularly Edie, don’t. We’re in her head, her viewpoint is as important and powerful as Callie’s – which in turn leads to her having her own story, her own plot line and her own agenda. Even without that, she has her own, clear opinions about Callie, the other characters and the plot that are purely about her, not just as a way to characterise other people. It makes her a major character rather than a support character – which is especially beneficial since she’s a Black woman.

I do think Mark is rather uncharacterised – to a degree that I was surprised by how young he is and had to mentally reset my impression of the character, which means something was missed in the first book, really.

The main difference between this book and Bitten is that we’re moving beyond the introduction phase and doing it well. Even with the POV switches, Bitten was about Callie, her introduction to the new world and her acclimatising to that. Now we have that foundation everything expanded – and expanded well. We have the world building of the Demonridden expanded, the very nature of the One (a big bad, apocalyptic force), explained as well as the motivations of various forces – the witches, Phaedron’s group, Silas. And all of them were expanded in a very sensible way – the history means that none of these groups are pure shining paragons of good any more than any of them are cackling maniacal fiends for the sake of being fiends. There is a depth to the world and the worldbuilding and the shifting POV gains us insight into the motivations and personal histories of each character.

In short, the world is expanding – it’s growing deeper and wider, with history and several parallel plot lines, while at the same time remaining personal to the characters within. It’s a difficult balancing act that is excellently maintained.

Callie is definitely non-neurotypical. I don’t know if her mindset stems from her powers, an underlying mental illness or the years she spent in wrongly-applied therapy and drug treatments, but she has a different mindset entirely that is really well conveyed both through her pov but also through the views of her fellows. Callie is also a complex character, nervous and afraid most of the time despite her immense power, incredibly unsure and insecure – until you push her. And when pushed she’s not just powerful and dangerous, she’s outright vicious, completely merciless and even brutally cruel in defending herself. I feel like she’s so nervous all the time but if driven to defend (or avenge) herself she has no limits.

There are some sex issues here that churn around my mind since they approach difficult areas – some are done well, some not so much. The Bitten have to feed on energy. That happens through a variety of ways – Mark usually feeds on anger, for example – but one of the most common method is sex. Both Callie and Edie can feed through sex and it is explored through Edie. I am always wary at the idea of forcing sex on characters through woo-woo, particularly because this form of magical rape is so often presented as romantic. But this isn’t – Edie hates feeding on sex, hates that sex has become a necessary part of her life, hates that a personal, intimate part of her life has become work. When she has sex to charge up it is presented as cold, as clinical as it is possible to do – there’s no joy or passion there. It’s not traumatic rape, but it isn’t “sex” either, it’s a chore. An onerous chore which is a welcome change from woo-woo forced sex being presented as sexual empowerment.

There’s also a contrast with the man she is actually attracted to, the man she has affection for, the man she is developing a relationship with. There we have passion, attraction and passion in stark comparison. Edie is a sexually active woman because of her like of sex with men she chooses, not because of the woo-woo that compels her.

Then there’s Callie’s use of her abilities on Mark which, again, has all kinds of fuzzy consent issues around it. He agreed, but then he said stop and she didn’t – with an added level of “I just can’t help it”. But afterwards everyone – Mark, Callie et al were very clear about what Callie doing being a form of rape.

Phaedron thinks of women in a highly abusive, dehumanising manner – and so does Mark when he is attracted to a woman. Whenever we have a male POV about women they find attractive, it’s skeevy.

This all combines together with the fact Callie was raped, with the rape Callie herself perpetuated in the last book, with Olivia’s sexually abusive past and the exploitation of it to form rather a lot of uncomfortable rape threads – though every one is challenged, condemned, labelled as such and presented in a non-sanitised, non-dismissive manner. Difficult topics handled well – but also handled rather often.

There are several other POC in the book besides Edie, including Edie’s love interest who is another Bitten who runs a shelter for recovering addicts and Olufembi, a bitten with her own interlocking agenda, showing that not every bitten is affiliated with an organisation. One of the witches is also Asian – I think Silas may also be a POC. All of these characters except Jiye have a level of complexity, but Jiye is a minor character I think may be expanded in the future. The portrayals are pretty free from tropes so far (except Jiye having an edge of “dragon lady”) and are promising for the future.

Sexuality is more fraught. We learn that Callie had a relationship with a woman – but it was coercive and at least emotionally abusive (which further adds to the sex consent issues of this book) and she’s attracted entirely or nearly entirely to men. One of the witches (who, again, are background characters I think will be developed) is bisexual and in a relationship with Jiye – but she’s also basically plotting to use Jiye as a piece in their manipulations which is pretty much dooming their relationship.

The story is becoming deeper, the world broader and some very fine meta is developing, all laid on a backbone of some excellent characterisation and some wonderful writing. There are issues, but they are few and generally handled with a level of nuance and respect that is so often lacking – an excellent read.