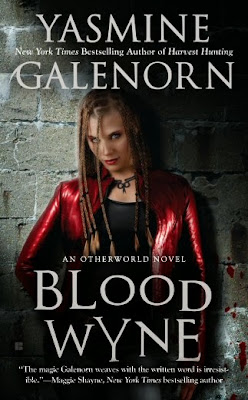 Menolly and Nerissa confirm their relationship in this book, growing closer than ever before despite the changes stalking Nerissa’s live – and despite the pressures pushing in on Menolly, including her vampire “daughter” requiring more of her attention.

There’s a vampire serial killer stalking women which in turn flares up human hatred against vampires. There’s also a vampire election coming up and the eldest child of the Blood Wyne, the oldest vampire, the vampire queen, is in the city and is determined to set what the results of that election will be.

He also has designs on Menolly herself.

I am torn a little here on the story. On the one hand I have the same problem I’ve had with these books since the very first – there’s a huge world here, a huge number of characters and all of them seem to have their own storylines that WILL get space in the main book (rather than spin off series of their own). Similarly, the main characters aren’t just focused on the main storyline – other things happen to divide their attention, like Delilah and the Autumn Lord and Chase or Camille and her father and the Moon Mother.

This book focuses on a main character, Menolly, but the story is a departure from the focus on Shadow Wing and the impending invasion. Instead we focus on vampire politics, a serial killer and developing the world building of the vampires with a side order of relationship issues and the Wayfarer bar. Morio, Camille, Vanzir, Smoky, Chase and the Demon underground all have their own storylines developed as well. And pretty much none of it relates to Shadow Wing or the war.

And this is where the being torn comes in. Part of me wants to complain about the distraction, and certainly I do question whether it’s necessary for us to have Chase and his new abilities taking up space or Smoky having his issue with his father. I’m not sure they add anything to the story except be more clutter underfoot.

But part of me also acknowledges that the reason why all the characters of this series are as strong, as fully fleshed and as identifiable as they are is the effort the author puts in to making sure that every character has a life of their own – which, by necessity, means they have stories of their own (but do we have to see them all?) And part of the reason why the world is so rich and compelling and complete is because it has all of these elements that do intrude into their lives rather than there just being one thing happening. It does make the world real – after all, how often can we focus on one issue in our lives and the rest of the world go away? Why should Menolly, a vampire, be able to focus on the war with Shadow-wing and completely ignore the vampire world? Why should Smoky be able to act without dragon politics ever imposing on his life? This really lets the world building tell itself – we could have Menolly drily tell us the risks vampires face of losing themselves – or we can see the a vampire face that very same, tragic fate. There’s  a lot of excellent world building about politics, about vampires and about basic characterisation that is expanded through experience rather than info-dump

It also helps that the pacing issues that have plagues the series have been really cut. The action is much crisper, there’s much less “preparation time” before each fight, the scenes move more smoothly, there’s much less need to talk about unnecessary detail like which car people are driving and why, or spend pages on people’s clothes or food or gardening and everyone recapping each other is taken as read rather than having to be spelled out every time. The story moves now, making distractions a whole lot more tolerable – and making this book one that maintained tension, action and flow throughout. It’s really encouraging to me that each book is getting better at this – and that this book had a good, exciting story with multiple elements, expanded world building and parallel storylines and handled them all with excellent balance between speed, description and exposition.

Ok, there are still some things that could have moved faster and there are storylines I think are unnecessary (Chase, Smoky, Morio/Menolly, even the Demon Underground), but it’s a vast improvement and the series continues to head upwards.

And it’s unfair. I fear these things because this is a pattern of how I’ve seen bisexuality depicted in so many Urban Fantasy books – (and TV shows) – bisexuals have inferior, lesser relationships with people of the same gender (or have none at all – their relationships with the same gender either being pre-story or being entirely potential rather than actual) before settling down with a proper, acceptable “real” opposite gender love interest; it’s a pattern that happens a lot. However, while I recognise the trope, it’s also deeply unfair to judge Menolly by that standard

We have some other lesbian characters as well – and they are well rounded and nuanced characters in their own right; one thing this series is very good at is making sure that all the characters are fleshed out sufficiently, even with such a huge cast, every member of that cast will have a personality (if anything it can be a problem to the long windedness). There was an issue of predation and evil about them, but it is strongly ameliorated by the sheer humanity of the characters. I could have done without Menolly describing how very hot she found her sister, Camille that was all kinds of icky.

That same humanity applies to the number of excellent female characters in the series. This continues to be one of the series strongest points, the sheer number of female characters, the different ways each are portrayed, the different power and ways of expressing strength each have, even among the sisters – but when we bring in Iris and Nerissa and Sharah and even Sassy – the plethora of women in this series is excellent. And they relate to each other – as siblings as friends as lovers, even as semi-competing love interests – they relate to each other and do not hate each other. With so many “there can only be one strong female character!” out there, this is a blessed relief. We had a series of female prostitutes murdered which is so often a trope in fiction – but also a tragic reflection of reality – and Menolly and Chase both respected and grieved for the women, there was no victim blaming, no shaming of them, no treating their murders as less.

But then we have the Vanzir issue. I despise the trope of sexual assault and rape being forced by the woo-woo, no matter how contrite the perpetrator is after the fact. It didn’t add anything necessary to the story or characterisations and ended up continuing the trope of “he just couldn’t help it” that I didn’t appreciate

I’m less enthralled with the POC – as I mentioned, there are an absolutely huge number of characters in this book and Morio is the only prominent POC (Sassy’s companion is also a WOC, but she is a servant, a minor character and dead so, yeah not really adding there). He’s also often the least present of Camille’s husbands – but I will say that that was resolved in this book, he was more of the focus, was closest to Camille and the main story for the longest and is developing a storyline in his own right.

I think I want to rate this book 3.75 fangs, which is annoying because I can’t do that. I think it was an improvement on the last book which I gave a 3.5 fang rating to. I think it flowed better, I think it worked better. But I also think it was too distracted, too rife with tangents and had a couple of dubious issues for me to be comfortable giving it a 4 fang rating. I am torn – this is a good book, it’s a great book, but it didn’t quite pull me up to the next notch, but it didn’t miss it by much and by the feel of the series, the next book is going to clinch it.