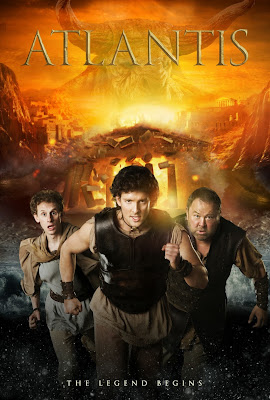 We open with some pretty blue water, generic-handsome guy looking  at said water with lots of angst and a Gordon Ramsay lookalike there to play older, wiser exposition giver to tell us handsome guy is going to dive to look for his dead father’s wrecked submarine. Handsome guy is determined to find out what happened to his dad who left him some really ugly jewellery.

I’m going to take a wild guess and say “he drowned.”

And if that acting were any more wooden it’d sprout leaves.

He dives and finds what I presume is the wreck of his father’s submarine – The Oracle. He also finds a bright light that sucks him in, destroying his own submarine.

Let us now send a third submarine down!

The guy, (Jason apparently), wakes up on a beach when a woman whispers in his mind. Ignoring the hearing-voices thing and the fact he’s now completely naked except for his father’s ugly necklace, he tries to attract the attention of some people on the beach in a boat. They don’t notice him and by the time he gets to them, they’re sailing away, conveniently leaving clothing behind.

Now dressed (in a tunic and trousers) he moves inland and finds a walled city atop a large, rocky plateau. The crowds are dressed in a similar style to him – pretty archaically and very unfashionably. It’s all very olde worlde – until he finds a two headed lizard thing and decides to pet it. Do not pet the hydra, honestly you’d think this wouldn’t have to be said. He runs through the market causing a small amount of chaos while the lizard tries to eat him until he manages to subdue it with a watermelon, a basket and a stick.

The guards aren’t impressed with him – whether for his terrible abuse of mythical lizards or destruction of produce in the market and they chase him next, with swords drawn (I rather think drawing swords is a trifle excessive a reaction – but the script says there’s a chase scene in the market, so chase scene there will be!)  Jason decides to run up this time (it’s in the script) and gets shot by archers, one hitting him and causing a minor, mildly irritating puncture to which he doesn’t even cry out in pain (what kind of crappy bows are these people using? Throw the arrows, you’ll probably achieve more!). The rest of the arrows miss and he jumps off the wall onto a roof to try and escape the guards (just in case the swords they’re carrying are slightly more dangerous than the nerf they’re shooting).

He ends up dangling precariously from some poor bloke’s window facing a brief fall and messy splash to the streets below.  The man pulls him to safety - it’s a bad sign that this show has barely started and I’m kind of disappointed by the lack of street splashing. With the guards angrily banging on the door, Jason hurries to explain himself to the man.

Wait, so he’s teleported to the past in a vaguely Aegean/Hellenic setting and this guy speaks English?

For reasons unknown, the man hides Jason and the guards come in and maliciously wreck the place for funsies (that’s not how you do community policing) and they apparently speak English too.

The man pulls Jason from his hiding place and treats his tiny arrow puncture in his arm (apparently loss of blood from that caused him to pass out) and Jason learns he’s in Atlantis. The man’s apparently Pythagoras and after a little while of Jason spluttering about losing his mind since he’s in ancient Greece, they’re joined by… Hercules. Well, that’s a different interpretation of the Hercules legend…  and after Pythagoras points out that Hercules is fat, in case we missed it, Hercules tells Jason to be gone by the time he returns because he has no wish to risk his own neck for Jason’s. A very sensible Hercules. Pythagoras is less sensible and asks questions, leading to Jason telling him about his missing father. The ugly necklace is the symbol of the Oracle who apparently hangs out at the Temple of Poseidon

Next stop, the Oracle. Inside the Temple is very impressed and we see Hercules already being blessed. The Oracle is expecting Jason (if she wasn’t, she needs to find a new job) or so one of the attendants claims and leads him to her where she is engaged in a bit of amateur chicken butchery.

Exposition by Oracle – there are many worlds and Jason’s world and Atlantis are just two of them. Atlantis feels vaguely familiar to Jason because he was born there – before his father took him to Earth when he was a baby in order to avoid his apparently many enemies. And Jason’s dad “walks among the dead” which is Oracle talk for “you think I just said he’s dead but by episode 10 you’ll find I was being unnecessarily cryptic and he’s actually a night watchman at a cemetery”. His mother’s a complete mystery to the Oracle.

And why is Jason there? To alleviate the fear and suffering of the people apparently. Crypticness follows about Atlantis not being lost, people knowing what they must do and a path Jason must follow. At which point the attendants kick him out because foresight can’t ever actually be useful. With Jason out of the way one of them ask the Oracle about a big glaring omission – apparently Jason will be safer not knowing “who he is”

Ah hell, is that a Chosen One storyline swimming into view?

Jason returns for a chat with Pythagoras until a procession shows up of people preying to Poseidon. Apparently they’re going to send 7 people to the Minotaur to munch upon or Poseidon, as is the Greek gods’ wont, will smash everything in an epic, divine hissy fit.

They return to Pythagoras’s house (or, as it turns out, Hercules’s house but he agrees to let Jason stay when Pythagoras reminds him he paid off his gambling debts). But that night Hercules sneaks out the house, defying the curfew and it’s instant-death penalty (someone needs to reign in these trigger happy guards). When Jason and Pythagoras catch up with him he explains he spoke to the Oracle who told him he must face the Minotaur – he’s fleeing in the hope of not being eaten. Of course, the guards find them and we have another chase scene – this time with hunting lions. Jason manages to escape with suddenly appearing gymnast skills that confuse everyone. Him included.

The next day everyone gathers in front of King Minos to draw lots on whether they become Minotaur food or not (the king watches while his 20,000 strong population draw lots, one at a time? Well you can’t say the king doesn’t suffer as well!). And Hercules draws a white stone. Jason (after making eye contact with the woman who I presume is going to be the designated love interest) also draws white – but Pythagoras draws black.

Back at the house they discuss various options, but Pythagoras refuses to escape because that just means someone else will be chosen instead of him.

Designated love interest, Ariadne, daughter of King Minos angsts over people dying to appease the gods and blames her father since he’s the one the gods want to punish it seems. Her mother slaps her for stepping out of line.

Before Pythagoras wakes up, Jason takes armour and a sword from his house and the black stone – and goes in his place. More eye-contact with Ariadne. While Jason is being ritually prepared, Ariadne takes over from the attendant and asks why Jason’s there since she saw him draw white. He tells her he is there for his friend and that he intends to kill the Minotaur, he has some kind of magic surety about it. She teaches him how to use a thread to find his way out of the labyrinth and gives him a special enchanted skein.

When Pythagoras realises what Jason has done he tries to stop him – but is told that it’s his fate to bore school children for generations (ok, that was a good line). Instead, Pythagoras intends to rush to the cave before Jason with weapons. Hercules following out of shame

It doesn’t quite go to plan, they’re caught but manage to get a sword to Jason. He faces off against a guard who promptly knocks it from his hand –Jason has no sword training after all. Hercules and Pythagoras are taken as tribute to the Minotaur and two of the other victims are allowed to leave.

The tributes enter the labyrinth, Jason reassuring a female tribute, Helen and trailing his magical string. The group scatters in the face of the Minotaur (while Jason is off alone scouting or some such) and the first man is killed (without  a splash of blood. Aww, are we really going to have a SANITISED Greek-myth based show?). Jason finds Pythagoras – but then runs from him when he hears Helen scream.

For reasons unknown, the Minotaur hasn’t merely knocked her down, leaving Jason to confront it. After a bit of dodging and being thrown to the floor he manages to grab a sword off the piles of bones scattered about and raise the sword as the minotaur charges him – stabbing it almost accidentally

I wish I could say I was being flippant, but it really is that anti-climactic.

The minotaur returns to human and thanks Jason – by name – apparently it was foretold that only Jason could decurse him. Apparently he betrayed Jason’s father – and Jason must make sure King Minos never finds out who Jason is adding that Jason has a great destiny. Then he dies before actually answering any questions. Oh gods this trope? Really? Cheese levels just got critical!

Cut to the Oracle dramatically declaring that the Earth Bull has been slain. This means that Jason is the answer to their prayers but, to no-one’s surprise, enemies will try and kill him for it.

Jason, Hercules and Pythagoras are taken to King Minos to be praised (what? You sent prey to the Minotaur because Poseidon would have a hissy fit – but he’s fine with you killing his bull man?) and Jason returns Ariadne’s magic string which he, apparently used. Of course, evil mother notices her interest. And the three guys banter as the episode ends.

Why does everyone speak English? Or does Jason speak Ancient Greek? If so, how and why?

That is the least of my issues. This is incredibly cheesey, it’s more than a little ridiculous, it makes little sense – and I have a sneaking suspicion it’s actually taking itself seriously rather than embracing the sheer silliness of the whole thing. Part of that isn’t helped by some really really dodgy acting. Really dodgy.

The plot is yawn-worthy in its clichés. Jason has his 2 goons for comic relief, the smart one and the inept funny one (who is fat, of course, clowns have to be). Jason himself is some nebulously defined Chosen One as alluded do by various cryptic people who are cryptic just because (a death bed not-revelation scene? Even Shakespeare would consider that trope dated) and he becomes a hero through sheer random pointlessness. He has caught the intrigued eye of the most-likely-evil king’s daughter for a classic love interest with some star-crossed side plots.

Inclusionwise I generally wait a few episodes to see what emerges – but the pattern seems pretty set. We have 3 women: 1 is a victim who is rescued, 1 is a love interest and 1 is a likely-evil mother supporting her husband. We have 3 POC, King Minas (likely evil king to be fought/deposed/killed), Ariadne (love interest) and a nameless, dead tribute. Ariadne may develop but I doubt it.

I thought I might like the world building – but I think the Ancient Greeks are being used for random words, nothing more