Bitten (The One Rises #1) by Anna Wolfe 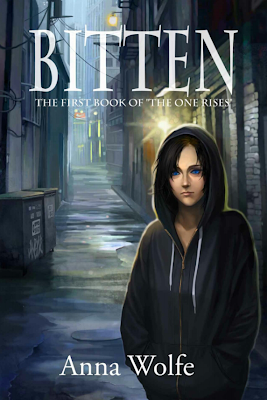 Callie’s life has fallen apart. Her best friend was possessed by a demon and slaughtered her friends and her brother – until Callie herself managed to behead the demon (and her friend) while getting bitten in the process, she was then be shipped off to a mental institution for the murder.

Having escaped the institution, Callie had one goal. Kill the man who called the demon in the first place and destroy the book he used. But when she completed the first task, something dark and terrible awoke inside her along with a terrible, evil hunger. Now she has a third task after destroying the book – killing herself for the terrible things she’s done.

But the book proves to be very difficult to destroy and she is found by an organised group of other Bitten who may offer a different path than suicide.

This is a completely original book. It’s totally unlike any other book I’ve read in the genre – we have minor elements that are parallels, but it really is something unique which is pretty precious out of all the books I’ve read so far.

The world is the foundation for this uniqueness. The idea of demons coming through – strange alien creatures that seem to have parallels only in the malice they hold – and biting people, spreading their influence. The Bitten with their demon-wrought abilities have different factions – including the one Callie has fallen in with. Those who try to police their fellows and live as good a life as they can.

It’s fascinating because, despite being self-appointed police, there’s little they can do against the actual Demonridden, or so it seems and there are factions that they must avoid enraging – again, so it seems. I say so it seems because the author has an excellently restrained view of world building. We’re not overwhelmed with details that aren’t relevant but we have plenty of hints to keep us hungry for more. Some information about witches here, some hints about other Bitten there, some allusions to history over here – lots of hints, lots of things to keep me hungry but nothing being stuffed down my throat.

The way the book is written is also extremely well done. We don’t just see things from Callie’s point of view, though she is definitely the protagonist, but also from Silas, Mark and Edie. Normally I hate shifting points of view, I think it tends to be repetitive as each character goes over the same plot points and often stops the protagonist standing out it can also break conflict since we know what everyone is thinking. But this is one of the few times it works – Callie remains firmly the protagonist, but the other characters are excellently fleshed out from the insight inside their heads. It also makes to clear that Mark and Edie aren’t just going to accept Callie and be her servants nor are they going to hate her for no good reason. The side characters who would normally be relegated to after thoughts in the book are fully fleshed out participants, characters in their own right as important as the protagonist herself. I really like it and am impressed that the author managed to pull of this quirk that normally makes me cringe.

This is held up through the rest of the writing – the characters and their surroundings are described just the right amount. Their emotions are examined without long angsty monologues. There’s a lot more showing than telling, the world building, as mentioned, is restrained the fight scenes have that perfect balance between action and description, the characters inner-monologues explains their actions without overdoing it and treating the reader like a fool. It hits that ideal balance.

Characterwise, all of the characters are really fleshed out – again, more with hints and insights than info dumps. Silas is a mystery but there’s definitely something old, tortured and paternal there. Mark has this skim of utter confidence over a lot of uncertainty and eagerness to please. Edie has a whole lot of compassion and good sense – but also an adherence to being “professional” or perhaps too serious and overly cautious – she’s been burned before. Callie herself is an excellent, conflicting and almost contradictory character. Part of this fits because she feels like a highly intelligent, quick witted and capable woman who has suffered overwhelming trauma recently that has hit her confidence and sense of self. She also is completely surrounded by near strangers, something unexplainable has happened to her, has changed her, she’s fighting a lot of guilt and having a lot of trust issues.

This leads to her having almost 3 characterisations: firstly, cowering, hiding, silent, hurting. Victimised, consumed by guilt and self-hatred she draws in on herself. Secondly, trying to run way from these strange new people saying strange new things and who have strange new powers – which more than makes sense especially since she has a mission to pursue. Thirdly, showing moments of pure brilliance and absolute awesomeness. Excellent courage, brilliant plans, carefully carried out and orchestrated tactics, thinking on the fly and all with a perfect poker face and solid acting talent

If there’s any problem with these three personalities it’s that they don’t always integrate well, so it can feel like Callie is an entirely different person. I think this is less of a current problem and more of something to flag and watch as the character develops. Especially since all those lovely tasty hooks imply that Callie has a secret that she is still keeping hidden which may explain a lot.

The story itself is excellent (I’m using that adjective a lot) for a first book in a series. We have Callie’s story and her introduction to the world – but it’s not the sum total of the book. We don’t just have her learning to be one of the bitten, learning how to control her demonic hunger and learning how to use her demonic powers – but we also have a story something actually happening. We have a quest, a plot and something that Callie is actively involved in not just being dragged around in while being taught.

As I’ve said there are some excellent female characters here – Cassie’s strength, her endurance through terrible experiences, her ability to learn, her intelligence, her determination, all combine to make her an excellent character. It’s possible she makes decisions that are rash – but that is partially due to her own complete lack of survival instinct and her suicidal plans; in general she asserts her independence without being an outright rebel. Edie, while being quieter, has her own strength opinions and determination, unlike mark she isn’t one to be ordered around and she commands respect and regard – she’s also a Black woman and joins several more minor characters to provide a number of POC even with a relatively small cast. Her powers seem to include healing but also keeping people calm and as focused as herself, unlike Mark’s rage hunger. But even with the power of healing and calm, which she uses when needed, she is not cast as a servant or a shoulder to cry on – quite the opposite, she’s not amused by the risk Callie brings. Unfortunately there are no GBLT people.

This book was an extremely pleasant surprise - a very good book and definitely worth a read for it’s awesome world, excellent characters and fun, fascinating story. But more than being a good book, it’s also a book that introduces a series with immense potential – I’m eager to see where this story goes from here. I’m hooked, by the world, by the characters, by the plot and by the very crafty foreshadowing.

A copy of this book was provided by the author for a review
Posted by Sparky at 12:00 PM