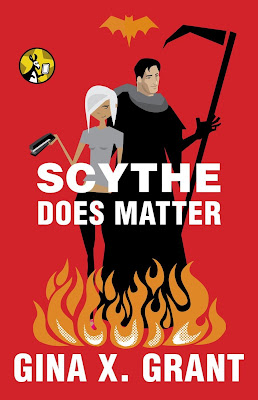 Kristy is torn – she can stay in hell with Dante, or she can fight to return to her mortal life, see her friend and loved ones but possibly never have a relationship with Dante again. It’s a hard choice

But one becomes much clearer when her boss, who already schemed to claim her soul, is now plotting another extension and back up plan; he’s going after her aunt. Her aunt will do anything for Kirsty – even if it means sacrificing her soul thinking it will bring her out of her coma.

Her mission is now clear – especially after how little Kirsty appreciated her aunt when she was alive. She has to return to the mortal coil, she has to get her life back and save her aunt. And to do that, she needs to become a Reaper, with the power to travel on the coil and affect the people there

And it’s past time her boss was scythed. But first she has to go to university and pass the course.

On the plus side, this book manages to be more amusing than the last one because it doesn’t try so hard. It’s amusing because the characters are kind of fun, the world is a little quirky the whole thing is silly in a good way. The puns are still there but they are much much more restrained and it’s generally lost the whole sense of trying to FORCE the humour that the first book had.

We also had a more coherent story. Kirsty wasn’t just wandering around while random stuff randomly happened randomly around her with much randomness. Nor was she just following people around. She had a plan – admittedly not a good or decent one – was motivated and decided to act. It wasn’t a complicated plan, completely failed to take various things into account, was far from sensible and there were definitely more sensible routes she could have taken. But it was her plan, it was a goal and it was something she set out to do and eventually succeeded in (kind of).

There was also a suggestion of character growth in this book and a definite forward push in her character. She learned, she adapted she accepted her capabilities or lack thereof. It wasn’t huge, but she did work to become more of a character than a passive actor. She even assumes some elements of leadership and a driving force not just in her own life but in the characters around her. She takes charge of her life, she forms new relationships and even shows courage and dedication that is surprising after the first book

I didn’t like the ending. It felt like it rather invalidated what the book was had spent most of the time doing – she saw a threat to her aunt and made a plan to try and counteract that. She then spent most of the book learning to become a Reaper, facing challenges, preparing for the big exam, making sure she put in the work, the effort and the dedication and trying to maintain her relationship with Dante and general aiming towards this end goal. But the events at the end of the book sort of invalidate everything she was working towards. Yes she definitely achieves things and her actions will definitely be great hooks for the next book, but her actual goal, the problem she actually set out to solve was kind of brushed over in a slightly convoluted and unbelievably twee manner.

I wouldn’t have minded a twee ending, it is after all, a happy fun book – but it was a twee ending that had precious little to do with everything Kirsty has been doing the entire book; the ending left me feeling that Kirsty could have spent the entire book becoming the best Macarena dancer of all time and it would still have ended in a similar fashion.

We had some decent moments I quite liked; the fallen angel was a nice touch, the continues jokey nature of hell (and expectation that you should cheat and everyone plays favourites) is pretty fun. We also have some pretty good female characters around Kirsty – both her dedicated, loyal friends who do have personalities but, most surprisingly, even potential rivals or people she looks down on. The “Death Valley Girls” are initially regarded with contempt – but they show incredible mutual loyalty that Kirsty has never had and some surprising skills and talents.

We have some POC, one is Kali. The goddess. She isn’t handled in a way that is expressly respectful, because this book doesn’t have that tone; but nor is she treated as anything less than what she is – a power and a serious one. We also have M’Kembi – the most dedicated and hard working in the class – but I wish his country of origin had been listed rather than just an African nation that Kirsty couldn’t remember, especially since it was summed up only as been a terrible place where M’Kembi lead a terrible life. It wouldn’t have been that hard to put a little more research in.

We have her aunt and her aunt’s partner as lesbians for some inclusion which is nice to see especially since they’re presented as loving and dedicated parents worth fighting for – but they’re more mentioned than present.

This book is definitely better than the first book – but that does come down somewhat to damning with faint praise. I didn’t like the first book, as I made clear. I think this has addressed many of the issues in the book, but other than correcting those issues it hasn’t really added anything compelling. We have a plot – it’s there and it’s not awful, but “not awful” is pretty much the summation of it. It doesn’t really pull me in. Similarly Kirsty has grown and developed, but has formed into a decent character with a lot more potential rather than a character whose story I feel compelled to follow. The world is broad and wide, but largely random with little real definition.

It’s a fluffy read, mildly amusing and I don’t think anyone will regret reading it – but nor is it really worth seeking out. The number of negatives have gone down but I still can’t honestly point to anything and say “that was awesome” “this was excellent” or “this was really well done.” It has some nice moments which really lift the book up, but “decent” and “nice” are the words I have to use.