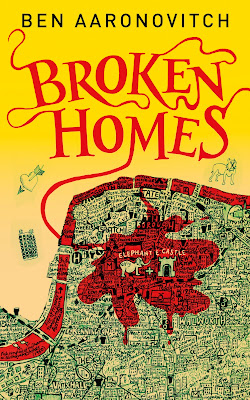 Peter and Lesley are still trying to track down the Faceless Man and his erstwhile pupils; it’s a long, tedious task only achievable by dogged police work.

Of course, the understaffed magical police force has plenty of other things to drag their attention – an ancient magical book that a thief tried to sell, a man committing a very suspicious suicide, people being microwaved, a Russian military trained witch and the gods and goddesses of the Thames demanding their attention. And some of it is definitely linked to a bemusing tower block that doesn’t quite make sense

There’s a lot to handle – and the Faceless Man’s influence is definitely behind some of it – but which and why?

When a copy of this book was pushed through my door on Friday evening, I opened it then cleared my desk, dropped my e-reader and turned off my phone. There would be no interruptions. When the sun rose Saturday morning, I had finished reading it – and could finally allow myself to sleep

It’s an excellent sign of a good book – does it rob me of sleep? Can I read all 357 pages of it without any breaks? And, particularly, can I read it in one setting and not even take a break to get coffee? The answer to all is yes, I love this book more than coffee.

There’s so much about this book I love. I love its realness – which sounds strange about a book that is about the supernatural, but it’s true. I love the sense of London you get from every page, the very real place that it conjures, the actual real place that it relates to. You can feel London – and intimate knowledge of London - on every page. I can’t undersell how powerful the setting is.

But the realness doesn’t just stop at the city, there’s also a lot of research that has gone into Peter’s job as a policeman. The procedures, the bodies he deals with, the hoops he has to jump through. His wry views of both the public through a policeman’s eyes and the same wry criticism of the police’s own failings both historic and present (especially as a Black man who grew up in a poor neighbourhood). When so many crime stories have magical forensics, impossibly fast deductions, so little actual investigation and police work and such a very fast and loose approach to what the law actually means, it’s so excellent that this Urban Fantasy book has a more realistic presentation of police work than any number of crime dramas. My personal favourite was replacing the jurisdictional battles (“it’s my case! How dare you steal my case!”) with police forces trying to push cases on each other because they can see how much budget it’s going to eat up.

Woven into that is an extremely complex and varied and deep world with rules and structure that makes for some of the best Urban Fantasy. But it’s coupled with both a willingness to allow characters – even awesomely powerful, knowledgeable characters – to be ignorant. Parts of the world building is covered by “I don’t know” and it’s not sloppy world building – it’s an acknowledgement that no-one would know everything about magic any more than we today know all there is to know about physics. The magical is blended into not just the present fabric of London as it is presented, but it’s also heavily entwined historically as well – the supernatural is carefully included as part of the history of Europe adding a layer of richness to the world. At the same time, even with the extremely long explanations that the book includes, we’re not given more of the world building than we can actually handle – it’s not too much or too overwhelming, it is handled with some restraint

Perhaps above all, I love Peter’s voice. I love his snarky self-depreciation, I love his wry view of the world, I love his underlying optimism. I love the character and his relationship to his family, how he clearly loves them, is amused by them, reacts to them and isn’t blinkered to the faults of his father. His relationship with Nightingale is excellent (and I truly loved seeing Nightingale truly let rip in this book to remind us that this quiet, unassuming, faultlessly polite man has such immense power). His relationship with Lesley works better now she’s moved more firmly away from being a love interest (there’s a hint around, but strong friendship is now much more clearly on the cards).

I like Lesley and she was much more present in this book so a more integral part of the story. However this did kind of make the focus on Peter a little more shaky – because Lesley was there nearly all the time but despite being present didn’t seem to be as involved as him. Which doesn’t work well with the general presentation of her as being much more capable, intelligent and skilled than Peter himself, which is a great portrayal. I think some of this can be explained by the ending but we shall see. Once element I appreciated was that Lesley is a far more unsympathetic, hard nosed copper to Peter’s more forgiving, more liberal, more bleeding heart approach which not only breaks stereotype but links nicely to their backgrounds.

I am curious to see Varava and what the book will do with her – she has the potential to be another strong female character if she is developed and her history and personality expanded above and beyond what we’ve already seen. As ever, I love the Thames goddesses even if they played a much more minor role this book.

Peter is a Black man, mixed race, and as in previous books we have a lot of low key commentary as to what that means and how that affects him, both with the culture shared with him and his mother from Sierra Leone, and his awareness of the prejudice he and other POC face. It’s always low key and often alluded to but not made into clumsy lectures, it’s well integrated into the story. The book is also interesting in that the race of people we meet is often referred to – you do see that in a lot of books but they tend to only identify the POC. For example, I’ve read a book that said “a little girl played with an Asian boy”, the POC’s race was identified, the (automatically assumed) white person’s race was not. This book breaks that – race is included as a valid descriptor of a person, but that includes white people.

There’s also some excellent class commentary, funny and dry references to the very real reasons why many people don’t have a great deal of faith in the police, nor do they welcome them. Peter’s dedication to winning trust and proving himself rather than just assuming authority (which Lesley, from a more prosperous background, is more likely to assume). There’s some great commentary on well meaning, but ultimately ignorant and rather patronising wealthy do-gooders and some nice side swipes at the media’s over-dramatic portrayal of poorer areas.

We do have several gay men referred to in this book – but only one actually has lines to speak and those pretty brief (though I did like his ex-Catholic mother announcing she would go back to the church only when it apologised). They’re not characters, they’re background colour, but at least there is some acknowledgement that

I’m going to have to break this praise for some caveats because I think a lot about this book is going to be highly subjective. Firstly, the humour is extremely British. The theme is extremely British. The setting is, obviously British, the references are British – this is a quintessentially British novel. There’s a good chance that a lot of the things that makes this book supremely awesome rather than just good will go over the heads of people who are not British.

Secondly, there is a lot of detail in this book. A lot. Loads of information about the location, the history, the magical world, police procedure, the way the various myriad powers that run (or don’t run) London work – it’s huge and it’s detailed. And if you’re not comfortable with this huge detail it may seem slow to you

Thirdly, the story is presented with several threads at once – Peter and Lesley don’t get to shelve everything in their lives, their studies or the different cases so they can focus on one case. They have several different cases, several different events, dealings with the supernatural beings that make up the world – this means we have a lot of side plots, a lot of leads and a lot of cases running parallel to each other. This can be confusing and it can lose the thread as well as the pacing.

As to the ending – massive tension, awesome excitement totally edge of my seat reading until…  NOOOOOOOOOO! No no no no, how can this be?! Noooooo! Yes, it’s one of those moments when you shout aloud at your book, as if that could change what you just read.

And that is all I will say on the matter without giving big, massive spoilers. But I despair! I despair! It says a lot about the quality of the characters that you can feel this kind of emotion for them. And I despair. Utterly and totally.

I have, grudgingly, included caveats as to why this book may not suit you. But this book was truly excellent – and an excellent continuation of this series. The meta plot has moved forwards, the world continues to be developed, the story drew me in and completely immersed me. I love this book, it’s brilliantly written has an incredible world, has characters I love – it drew me in and didn’t let go of me until I’d reached the last page and it’s only through firm determination that I didn’t flip back to page 1 and start reading again.

A copy of this book was received from the author for a review. And he signed it showing there are still awesome uses for paper books
Posted by Sparky at 3:00 PM