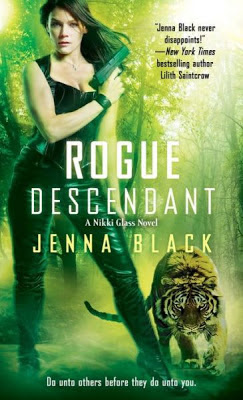 Nikki wanted to stay out of any further conflict with the Olympians. Konstantin had stepped down, she could now avoid any more fighting. But Anderson wants vengeance – and Nikki to hunt it down for him

She adamantly won’t do that, but when someone starts targeting her life and her family, she feels like she has no choice, especially when innocents begin dying. Of course, the question is who is actually targeting her – and whether they can be stopped without violating the treaty that prevents the more numerous Olympians going to war with Anderson’s Liberi.

I think this book is, in part, meant to give us chance to catch our breath and recover from the big, dramatic game changers that took place in Deadly Descendant and it definitely does that but I’m not sure it’s needed since there already was the novella Pros and Cons in between to help break up the action.

I’m also not entirely sure if the book was supposed to be a slow lead in to more action or if it just came across as a slow lead in and wasn’t really meant to be.

This ambiguity kind of follows me throughout the book. Nikki is being targeted by cruel and terrible unknown forces (well, the Olympians) who are burning down her parents’ home and her own flat! How terribly traumatising and upsetting…. I guess. I mean, I think it would be terribly upsetting and it certainly is for her sister and parents but Nikki? I don’t know, she doesn’t seem all that upset. Is this supposed to be her emotional disconnect to things, or how she’s moved on from these places? I don’t know – it’s kind of left out on a limb and I’m extrapolating her emotional distress more than it actually being portrayed.

Similarly, when she flips from being willing to risk her life and Anderson’s wrath to not be a murderer to accepting the need to hunt down Konstantin. I can see the reasoning, I can follow the reasoning, I agree with the reasoning – but I don’t FEEL the emotional change I would expect

The same applies to Nikki’s growing affection for Jamaal, it just isn’t really sold to me. Surprisingly, his affection for her is really clear and blatantly obvious even when Nikki doesn’t realise it.

I don’t know – is this “show don’t tell” being taken just a little too far? We can infer Nikki’s emotions based on the vague cues and our knowledge of how we’d feel in her shoes but it feels stand-offish for the protagonist.

While the emotional development felt off, I still quite like Nikki as a character – which is why I hate the faulty tags on the cover “Do unto others before they do unto you.” No no no. They did this with the second and first book as well. Nikki isn’t a lethal warrior, she isn’t a hunter, she isn’t an avenger, she isn’t a vigilante. She actually has very strong moral qualms about violence and killing, she describes herself as a bleeding heart – and that’s ok. In a genre full of protagonists who would happily shoot your knee caps off because you looked at them funny, it’s nice to see a character who can fight when called for but has deep moral reservations about using violence and is certainly torn about killing. There’s no need to try to present her as a badass avenging angel, she’s fine as she is.

Her power can be a little frustrating. One thing that impressed me in Pros and Cons was how, even with Artemis powers guiding her, Nikki followed actual investigation. This book her power involves zoning out and magically knowing exactly where to go – which makes it more overtly woo-woo but if anything disempowers Nikki because it is so hard to access and seems almost separate from her and certainly from her skills.

What I do like about Nikki is her values and her dedication to them and her determination to follow them. Sometimes that means being a busy body – like constantly following Jamaal around even when he tells her to back off (though she does show herself capable of that with Leo, I give a pass with Jamaal to a degree in the sense that Jamaal is a very different person from Leo and it’s fairly clear his solitude is not of his choosing) – but she is a genuinely caring person and, yes, a bleeding heart. Her courage in standing up to Anderson, her clinging to her morality, her trying to find another way until her choices are pretty much forced is a good portrayal.

I like how Anderson evolved some here – both with a more overt reference to his interest in Nikki, but also with him revealing a little about why he’s secretive. He’s not all menacing about Nikki keeping his secret because he’s on a power trip; the very world itself lies in the balance. Also it’s true that it isn’t Nikki’s business, he exposes her curiosity as the nosiness it is for mutual character growth. At the same time his denial about Emma is pretty unsupportable. Yes, he loved her – but she’s just confessed to murdering his ex to spite him. After that how can anyone even remotely play the “no she wouldn’t do such a thing!” game?

Jamaal has definitely grown – after his powers got adjusted his tiger is certainly a problem, but it’s an infinite improvement from him being the bad tempered, almost animalistic character he was in the first book. His interest in art, and the explanation behind it, is really well done and adds a lot of depth to his character, his history, calls out stereotypes and fleshes out how his past and his race have affected him. Jamaal is certainly heading to a much better place.

Unfortunately, the portrayal of gay people hasn’t moved on from Deadly Descendant; only adding an evil gay villain (and at least part of his evil is motivated by his sexuality and his extreme selfishness) to complete the really homophobic package going on in this series. I would also like some female characters being present a little to be more than teeny tiny parts along with Nikki and the evil, damaged being of Emma.

Outside of the characters, the story worked really well. It was decently paced, there were a couple of good twists and it kept me reading without hesitation. Not the best ever but not one I felt the need to put down. It was a good story and, as I’ve mentioned before, it has a really good world. I do love the Olympians, I love the very concept behind them, the gods, their abilities, the whole Liberi and their children being a threat – it’s a truly original idea. As a mythology geek I was always going to love this world. But, it’s now 3 books in and this world hasn’t exactly developed much, I’m not even entirely sure what everyone’s powers actually do; I think it could use some more world building, but I have high hopes for the next book.

All in all it was a pretty good book. It has a plot that kept me engages and characters I’m definitely invested in. I do like that the characters are actually growing and we’re also losing some of the issues that troubled me so much in the first 2 books of the series. It’s not flawless yet and there are some elements of inclusion that are spiralling, but the plot and world are going from strength to strength, albeit slowly at times.