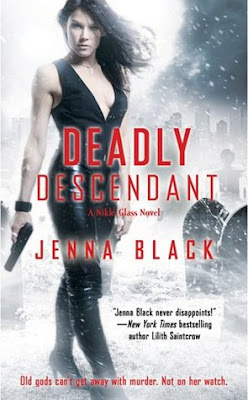 Nikki, descendant of Artemis is awkwardly fitting into Anderson’s house of Liberi, while still trying to maintain some semblance of independent existence – not helped by her work place burning down and having to work for Anderson as well.

A further complication is Emma. After her deeply traumatising experience with the Olympians, she has become increasingly unstable and difficult to be around. Her fights with Anderson rock the house – and her jealousy has focused squarely on Nikki.

There’s a new Liberi in town, one who is hunting innocent civilians with a pack of wild dogs. Even the Olympians want to track him down – not that they care about innocents, but they want him found before he exposes them all to humanity.  Of course, when it comes to tracking someone down there is no better candidate than the descendant of Artemis.

I do really like this world setting - I’m a mythology geek, I always have been. Throw in some ancient deities and you’ve hooked me – and this world definitely hooked me. The descendants of the gods with their arcane abilities, battling against the supremist and cruel Olympians, a full range of different pantheons (even if they do have a Greek focus) are really well done – and I just would like to see more. There are some gems of characters as well – I think Jack, descendent of Loki – always playing his own game, never really sure what he’s up to, but always having so much fun is definitely one of my favourites.

The plot itself was largely solid and decently paced – expanding the world well without inundating us in unnecessary world building. We have a mystery that Nikki has to solve, murders to stop – her motivations are detailed, her thought processes reasonable without too much in the way of monologue and the investigation proceeds in a reasonably well paced way. Some of it is short cutted by her Artemis power that makes her a gifted hunter, but it doesn’t make it merely a matter of “ding lookit my magic”, she does actually have to do some work. In fact, I’ve seen detectives in other novels who have made far greater, illogical leaps to convoluted solutions than ever Nikki has. I don’t think the plot was especially complicated – there were twists but they weren’t unexpected or major – but nor was it totally linear because there w If there’s any fault with the plot it’s that some character development wouldn’t have gone amiss for some of the side characters who are little more than names. A little day in the life of Nikki before the plot launched wouldn’t have been a bad thing. As it is, we’ve never had chance to establish a “baseline” for how the Olympians live – or even what half of them do all day. We have some really nice hints (like Maggie’s romance novel war) and some odd diversions (does it matter if someone’s drinking tea or coffee?) so I really do hope it could come in a future book.

I did feel Emma’s antagonist was excessive, unexplained (and, no, “she’s crazy,” isn’t an explanation) and spotted by Nikki before there was any reason to believe it was going to happen. Since a large part of Nikki’s motivations rests upon Emma’s malice, I think it added a weakness to the plot (and I don‘t understand why it’s necessary to have a protagonist lie to her allies so she can go solo in a dangerous situation). Except for that, her motivations, her conflicts and her actions make sense and continue to develop her presence in the house. I like that she hasn’t instantly decided “this is my home, these are my family” she is taking time to adapt, to fit in – and is still feeling very much the outsider in the home. I do wish she’d interacted more with the characters she had formed some kind of connection with – like Maggie – but it did emphasise just how much the house was not her home.

I’m torn about the female characters in this book. Like before, there’s still a considerably lower number of women than men but the problem is compounded by the nature of the women who take centre stage. In this book Steph and Maggie are both largely absent (though, again, we swipe at the men’s silly dislike of having Maggie carry things despite her super strength) which is a shame because they’re both good, interesting characters. Instead we have Phoebe (evil evil Olympian oracle who Nikki declares her hatred of within seconds of meeting) and Emma (evil evil woman who Nikki declares her hatred of within seconds of her first appearance).  The problem with the way Emma was written is that she was, in some ways, written the wrong way round. Nikki expresses how horrible Emma is, how evil and malicious and nasty (and frequently adds the word “bitch”) BEFORE Emma – who, we have to remember, has been tortured, raped and traumatised for the last 10 years – really shows us any behaviour to justify the depth of Nikki’s contempt. I’m left feeling that Nikki is a rather horrible person that doesn’t really go away even when Emma does develop into the hateful, jealous unstable enemy. And just the way Emma was written bothers me – she was tortured for 10 years, she was raped, she died repeatedly and came back, a harrowing experience, but there’s so little sympathy for her. She’s an enemy from almost the opening of the book – at best a nuisance, at worst a malicious, evil force.

The sad thing is I generally like Nikki; she’s a capable character who, despite the odd Spunky moments, is generally a good character, she resists losing her independence, she still wants to live her own life. She does seek validation and belonging but is aware enough to realise that she is and why and to counter that. She’s brave without being fearless and she’s compassionate even when it’s impractical to be so. She is intrusive and pushes where she should back off, but she’s also caring and forgiving. She does have odd out of character moments when she will just snap though – and often without any build up which just seems like a clumsy insert. But I really wish Nikki would have some female friends or allies who are more than a couple of lines. On the plus side (oh why is this a plus side? Why isn't this a given?) the multiple rapes of the first book were not present here.

We have some expansion on Blake, descendent of Eros and sex with men. In the last book we knew he was willing to rape men, now it’s expanded and he’s “heteroflexible”. But not naturally – he’s naturally straight, it’s just Eros powers that make him willing to blur the lines (yay, being GBLT is an unnatural add-on). And why is he willing to blur the lines? Well his Eros power means if he has sex with a woman more than once he is just so damned awesome that she will never know pleasure with another man. But that doesn’t work on men because… reasons? Because Eros, the Greek god, has heterocentric powers? So this means he can love a woman without sex, or he can have regular sex with a man, without love (because he’s totally straight). So, opposite sex for love, same-sex for a shag – which feeds rather nauseatingly into the idea that GBLT people are lusting sex monsters. And that’s aside from the fact that the only character who is anything-less-than-totally-straight has the super power of rape.

When I wished for more inclusion? This was not what I had in mind.

Jamaal was much more developed this book – and is clearly being slated as Nikki’s star-crossed love interest. I could do without her saving him, telling her how to use his powers and generally being the guiding light given his far greater experiences both in life and with his powers, it's annoying and infantilising. She also really needs to stop comparing their experiences. No really, that's so far out of line she can't even see where the line is - she was bounced around the foster system after her mother abandoned her - yes, sad. He was a slave who was sold away from his mother, there is no comparison here and he should have handed her to Emma gift wrapped for making one.

I also hope, after this book, we can finally put to bed the angry, violent, animalistic Black man who has terrible self-control issues. Just as with the predatory Blake and the evil Emma, it would help if there were other prominent POC characters to balance this. It’s still not great but I do hope for better. And for her to stop calling him exotic, really, stop that.

This series is becoming one that almost frustrates me. Because the story is good, the characters – the principle ones anyway – have some depth to them and are definitely interesting to follow. The world setting is fascinating, pretty unique and with more than enough hooks to get me enthralled.  There is potential for some great stories here – but the story so far doesn't live up to that. It's not awful - it's pretty fun and certainly something I’d happily read and enjoy, but not something I'd re-read. But the marginalised characters within need a lot of work.

Also, the tag lines on this book and the last one annoy me. "Old Gods can't get away with murder. Not on her watch" sounds so very bad ass. She spends most of the book wringing her hands about what to do, sparring with Emma, cringing from Anderson and then wringing her hands because of the poor innocents. These aren't bad things - but this tag and the last tag (that called her a weapon) just give a completely wrong tone for the book and heroine.