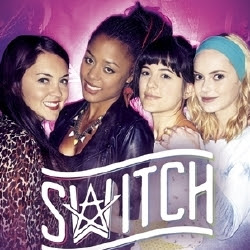 Grace and Gerry are all over each other on the kitchen table – which is so unhygienic. Jude just turns around and walks away. Hannah tries to rescue her toast but abandons it – until Stella comes in with a strong “excuse me” and Grace collapses in embarrassment.  Lots of friendly poking of each other’s love life, led by Hannah (and Jude puts whipped cream on cereals. I am torn between envy and horror) AND she picks up on the need to clean up after the chopping board make out.

Stella asks Jude if she can give her the numbers of all the girls she was trying to set Stella up with who she turned down, Hannah wants to borrow £20 off Stella (and needs a job) – it’s these constant little friend interactions between the characters that really works. Grace wants Jude to teach her how to be cool around Gerry, but Jude is getting irritated by Grace and Gerry (and Gerry’s lovely half-nakedness) everywhere.

Jude gets a tweet from the Cricklewood coven – one of her friends wants a tutor for their daughter to make sure she gets into a good coven - Stella laughs at how pretentious this is but Hannah leaps at the chance.  Using a quick switch to boost Hannah’s reputation, she easily gets a job tutoring witches.

The pupil arrives with her mother – who’s working 3 jobs to pay for a massive amount of extra tuition for her daughter – and not just in witchcraft. And the daughter turns out to be demanding and treats Hannah like a servant. And becomes increasingly more condescending and shirty to Hannah when she thinks she’s not getting her money’s worth. Hannah realises that the girl, Tuppence, is really educated, but has never been in a coven before, which is so odd at age 15.

Grace tries to be cool around Gerry and… fails dismally. Finding out that Gerry is making posters all days she bothers Jude for some pens so she can show him how nice she is. Jude, again, tells her to relax and not be so obsessed with him. Poor Jude.

Well Jude has had enough of this frustration and calls up a booty call, Mike. He arrives and they, noisily, get down to business. It’s no strings attached and he can’t even remember her name. As Mike leaves, Jude sees Gerry and Grace playing and having fun – not having sex – and feels dissatisfied with just the sex call and asks Mike to stay. And they have sex again – and Jude and he finally talk and learn what they both do. And, at the end of a meal, Jude asks Mike to go out with her.

They have nothing in common and, as they hang out with Grace and Gerry in the kitchen, it’s clear they know nothing about each other and the awkwardness abounds. But Gerry leaves and Grace has a crash of confidence.

Stella is efficiently organising her speed dating. She’s harsh, efficient and really funny (and beautifully shoots down the man who interrupts her lesbian speed dating). Still she returns home disappointed. Just as Grace convinces Jude to ring Gerry (Jude doesn’t understand why she wants Gerry there all the time). Which is when Mike gets call from his colleague saying they haven’t got funding – and he completely loses his shit and destroys his phone causing much concern through the house.

Later, he notices a traffic warden heading towards where he is parked and leaves in a hurry. Jude and Hannah worry – a worry that is heightened when he returns with blood stained hands, he’s more than a little volatile. Jude breaks up with him, he demands a reason and she makes up a boyfriend, on the oilrigs who has just returned. Volatile and emotional, he says he’ll talk to him, that Jude deserves better. He demands to meet her boyfriend – and she says he’ll be there at 8:00

Tuppence continues to try and form friendships with Stella, since they’re both Earth elements and both agree that other elements are just far too sensitive. She fails dismally and ends up mortally offending Stella and making her insecure about her fat arms. Tuppence locks herself in the bathroom. And Grace decides to be even more clingy with Gerry and go follow him to his rehearsals. When Gerry tries to avoid her meeting his bandmates, she loses her temper and storms off.

At home Grace is full of doubt and insecurity and Hannah suggests a truth Switch so they can find out how Gerry really feels – Stella’s on a date so Hannah asks Tuppence, another Earth, to help. Over with his band, Gerry starts telling the truth to his bandmates. Including things best left unsaid.

Stella goes on her date – and is stood up. When Janet arrives, her boss who is awfully flustered when she notices Stella. She claims she’s leaving, that she’s been in a meeting with a new client. She has a drink with Stella when she realises she’s been stood up.

After several drinks and Stella ranting about being stood up, Janet agrees and reveals she never had a meeting at all – she had been stood up as well. She decides no-one stands her up without getting an abusive email and sends one off on her phone. Stella’s phone beeps.  Yes, they’re both each other’s date. Janet isn’t gay but after 40 years of no meaningful relationships she says she’s interested in both (would it have been that hard for her to tick bisexual?) Stella sets her up with the man she was speed dating with earlier – because they both love cats.

At the flat 8:00 comes round and Jude’s “boyfriend” arrives to confront Mike. Aaron, her friend from work. Aaron acts tough and then Mike steps on his toe and Aaron squeals and whines.  Jude snaps an confesses to being a commitmentphobe, she’s not ready to settle down with anyone. She’s such a commitmentphobe she’s not ready for her friends having relationships. Grace asks if she’s jealous of her and Gerry and she says yes – she’s jealous of him having Grace follow him around, she doesn’t like who Grace becomes around him. She will be, but she’s not ready yet, she just wants her friends.

Gerry arrives with lots of wounds on his face where he’s clearly had a disagreement with his band members. Still under the truth spell she tells everyone that Jude puts the normal rubbish in with the recycling. He says that Hannah confuses adventures with running away from her problems. And he didn’t introduce Grace to the band because they’re a bunch of “indie twats” and he was ashamed of them, not her. And also that he wants to have a no strings fling with Grace but he fell in love with her last night – hard truth shared, the spell is lifted (destroying Tuppence’s Ipad).

Tuppence’s mother arrives and is stunned by many of the things Tuppence did but is astonished that Tuppence cast a spell with Hannah’s coven. Tuppence also insists she wants to join the “right” coven not the “best” coven. Hannah gives Tuppence her fee and tells her to go out with her mother as a friend. Tuppence mother is ecstatic because she’s never see Tuppence like this and as they leave they throw all the extra-curricular notes in the bin.

Jude talks to Hannah about Grace – she feels like a bad friend for not being happy for her but is worried that Gerry will change things, especially as they’ve just got Hannah back. Hannah digs out all her old photos and tells Jude that their coven changes all the time – and that’s what keeps them strong. Hannah is stressed because she’s trying to find a picture of her first Switch her mum took and can’t find it – Jude wonders if she’s missing more than the photo. When they’re all gathered together, Hannah asks if anyone knows where her mother is.

While Grace and Gerry are interesting I also think that Grace, she who had to deal with the ultra-clingy Joel, could have had a sharper learning curve.

I do like how Switch pushes home the message of money not buying everything. The four witches have an excellent, fun and caring friendship despite not having a lot of money and we constantly see extremely rich, over-achieving people who are so much poorer in their lives – first with the Kensington witches and then with Tuppence.  There’s a strong emphasis on the value of friendship and of going for what you want and need (good friends) rather than pursuing empty ambition.

I think they brushed over Janet too abruptly, they made her possible bisexuality sound more like desperation of ever finding someone and being afraid of being alone than anything – and is it that? Is it a straight woman who is so lonely and so afraid of being alone that she’ll date women even though she’s straight? Either way, it needed expanding, ideally.

Aaron is completely and utterly a GBF, everything he does, everything he exists for is to serve and help Jude all the while being a terrible stereotype.