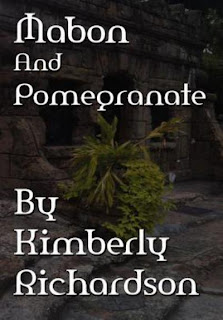 This is a book of 2 short stories. In Mabon we are introduced to Monica, corporate worker who dreams of more. In ever increasing despair she throws it all away – her job, the pay packet, even her mother’s approval, to find something more. And that more is the town of Mabon, a place where she can embrace her creativity without being stifled, a place where she can experience her own dreams among eccentric people who love and embrace their own path.

But Mabon is far more than it seems, it’s not just a place for people to dream, but a place where those dreams, all the beings of history and myth, are very much alive and vibrant – leading Monica far deeper than she imagined

In Pomegranate, Alexandra has cast aside her mundane life to pursue her ambitions and now has a wonderful life as a book store owner, married to a wonderful husband and with great friends. She has the perfect life. Until it all starts to fall apart and loss compounds loss while she struggles onwards in the face of grief and betrayal, all the while lead on by Duke, a strangely compelling and mysterious stranger who she can’t help but be drawn to.

I quite like how both of these stories take a protagonist who is, in many ways, the same person, or a very similar person – and then uses them in quite different stories. Both Monica and Alexandra are women who fought free of the expectations pushing at them. They are artistic, creative women who not only crave expression and creativity, but utterly need it for them to be themselves as people. Without it they are hollow and have no true happiness. Both of them turn down lives that they “should” want, lives of corporate success, lives of high income, lives using their extensive education. Both of them face down their family trying to force them down the path, standing up to angry parents who demand they be the child they envisage they assert their own individuality and autonomy over their own lives. Both embrace what is supposed to be a societally “lesser” role of working in a book shop which, instead, brings them real joy and happiness.

And both of them find the fantastic – but through very different paths. Monica arrives in Mabon and is introduced to the supernatural through a lens of wonder – she sees beautiful and amazing thing and sees more and more elements of the fantastic, the mystical and the wondrous. Some elements are frightening, but she enters the world in joy and exploration.

Contrast that with Alexandra’s slow, dark seduction. She reaches this world through a dark place, through the loss of loved ones, through terrible temptation, through betrayal and pain. It’s fascinating and wonderful - but a whole lot darker and more dangerous.

Both stories do a good job of really setting the scene with some beautiful and evocative language. I can see and feel the worlds and their fantastic people. There’s a real sense of the mystical and a very strong through the looking glass feel to Mabon and well as a creeping foreboding to Pomegranate. The setting, the build up, the scale and power of the world is really well presented with some truly fleshed out characters whose history is fully developed, helping make these characters truly tangible.

My main issues with both short stories is that of pacing. I’ve described how elaborate and beautiful the language in both books is – especially Mabon – well this is the downside. The stories are slow, we get such a wonderful description of the setting that it takes a terribly long time to actually move the story forwards. The settings are wonderful, the description beautiful but at times I feel like I’m sightseeing more than I’m actually going somewhere – which isn’t necessarily a bad thing but isn’t to my taste

I think I would be far happier with that if I didn’t feel the stories were unfinished. Mabon feels like a story with a long, descriptive beginning, setting up the world for the story. Then a medium middle where we get the bones of the actual story – the Lin and their war and how that touches Monica and gets her involved. She makes preparations, she sets off, we see more of the world open up to an extent I never imagined, wonderful twists are introduced, characters become much more detailed and rich and… the story ends. It ends but it hasn’t finished – there is no conclusion, there is no closure and I don’t think there’s even a “to be continued”.  I actually flipped back and forth looking for the rest of the story, because I didn’t understand why we ended there and why this great story that had finally got hits pacing together, was on the move, was using this great world with its depth and richness suddenly ended mid-stride.

I had a similar feeling with Pomegranate. Again, we had a very long build up – the characters are introduced with wonderful details and layers, we known Alex’s history, her life, every step she takes to end up where she is. We get a lot of set up of something supernatural happening, lots of foreshadowing, lots of suspicion and suspense and build up and then… ENDING! It felt abrupt and with things left unresolved (like whether the tragedies in her life were manipulates) and what does it mean to become what she is?

Inclusionwise, the protagonist in both books is a Black woman. I have to say, without the cover art, I would have missed it in Mabon, but Pomegranate makes it clear with a strong sense of culture and origin and a nice underpinning of who they are.

In Pomegranate, Alexandra is revealed to be bisexual, but like so many bisexual characters in Urban Fantasy, her same-sex attraction happened “off camera” in the distant past and is a foot note in her biography.

It’s a strange thing, I loved both stories in terms of setting, characters and development, but I think the stories themselves were put together in such an odd way, with odd pacing and direction that they missed becoming what they could have been.

ABOUT THE AUTHOR
After found as an infant crawling among books in an abandoned library, Kimberly Richardson grew up to become an eccentric woman with a taste for jazz, drinking tea, reading books, speaking French and Japanese, playing her violin and writing stories that cause people to make the strangest faces. Her first book, Tales From a Goth Librarian, was published through Kerlak Publishing and named a Finalist in both the USA Book News Awards for Fiction: Short Story for 2009 and the International Book Awards for Fiction: Short Story in 2010. Ms. Richardson is also the Editor of the award winning Steampunk anthology Dreams of Steam, the award winning sequel, Dreams of Steam II: Of Brass and Bolts, and the upcoming Dreams of Steam III, all published through Kerlak Publishing. Other short stories and poetry by Ms. Richardson have been published through Sam’s Dot Publishing, Midnight Screaming and FootHills Publishing.  Her first full-length novel, The Decembrists (Kerlak Publishing), will be out in 2012. Her other book, Mabon and Pomegranate (Kerlak Publishing), will be out in 2012 as well.

You can find the other stops on this Blog Tour Here
Posted by Sparky at 8:30 AM