A Clash of Kings by George R.R. Martin Book 2 in A Song of Ice and Fire 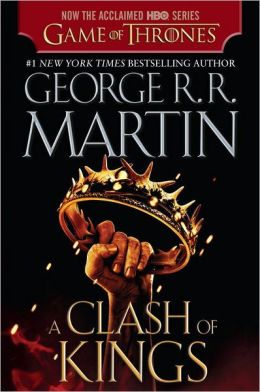 This series continues to be extremely epic but I shall do my best to recap it and share my thoughts.  The seven kingdoms are at war with Stannis Baratheon and his younger brother Renly Baratheon, both declaring themselves King.  Stannis as the older brother has the stronger claim but Renly as the love of men and a large force to support him.  Their push for the Iron Throne, is based in the fact Joffrey Baratheon is not their brother Robert's son, but in fact the product of an incestuous affair between Queen Cersei and her brother Jamie (the kingslayer) Lannister.  If that were not enough to cause strife in a kingdom, Robb Stark has declared himself the king of the north and not to be undone, Balon Greyjoy has declared himself King of the Iron Islands and is intent on taking control of the north as well. While these men squabble for power, a threat is quickly building north of the wall and  Daenerys Targaryen is determined to recapture the what she deems her rightful throne, with the aid of her three living dragons.

There are a lot of characters in this story and it can be easy to get lost in the relationships of the minor characters.  There is an appendix at the end of the story; however, that may not be convenient for those who are reading a digital copy of  A Clash of Kings.  The main characters are very well developed and the book adds an intense layer of characterisation that is actually lost in the series The Game of Thrones. The internal dialogue really helped establish the motivations behind the actions of the actions of the characters.  For instance, Theon Greyjoy while still a disgusting sexist pig, is a far more sympathetic character than in the television series.  The fact that he was fostered against his will at Winterfell and then derided for this when he returned to Pyke by both his father and his sister, played a huge factor in his decision. Theon found that he didn't really belong anywhere because despite being raised alongside Ned's sons, he was most certainly not a Stark, and having been gone from the iron islands for so many years, he had been supplanted and in many ways forgotten.  In the end Theon just wants somewhere that he can belong and to prove his worth as a man and a soldier.


I don't think that any amount of characterisation could make Daenerys Targaryen more palatable. I understand that she feels a birth right to the Westeros; however, she comes across as self absorbed and petulant a great deal of the time.  Daenerys says repeatedly that she knows that the people of the seven kingdoms will not immediately swear fealty to her, she counteracts this statement repeatedly by asserting that her presence will inspire love.

With he exception of Daenerys, I largely enjoyed all of the female characters in this story, though they all seemed to have been touched by sadness in someways. The night that Stannis decide to invade Kings Landing, Cersei has a conversation with Sansa about what it means to be a woman.  She is all to aware that from birth, her twin Jamie was destined for greatness, while she was destined to be married to a stranger and bare children. Cersei finds comfort in her children and I do believe that fact that all of them are the product of incest rather than her marriage with Robert, speaks loudly about the way she has strived to thwart gender expectation.  In the end, Cersei knows that a woman has a certain amount of power in terms of her body and gender but all of this pales in comparison to the power of the sword.


Arya Stark, who had the misfortune to see her father beheaded grew by leaps and bounds in this novel.  Though always an independent person, this time Arya had no one to fall back on but herself.  In particular Arya's relationship with Jaqen H'ghar is fascinating.  When Jaqen H'ghar informs Arya that he owes her three lives because she saved him and his companions, Arya names Chiswyck, a man guilty of gang rape and Weese because of his physical violence towards her.  With two names gone, Arya worries that she should have named someone like Tywin Lannister.  When Jaqen H'ghar presses for a third name, she says his.  This means that he is honour bound to kill himself.  As an alternative Arya asks Jaqen H'ghar to free men from the north who are in the dungeon in exchange for un-naming him.  For someone so young and in such a horrible situation, Arya is always quick on her feat, brave and smart.

Brienne of Tarth, is yet another fascinating female character.  Brienne is not your typical maiden and is larger than most men.  She comes to serve King Renly by participating in a melee and in the end defeating Loras Tyrell.  Renly tells her to choose her pride and Brienne asks to become a member of the Rainbow Guard.  For all of her power and skill, Brienne loves Renly and it is a love that will go unrequited.  She is taunted continually for inability to conform to gender norms and when she does make an attempt to is mocked mercilessly.  Brienne is a quiet and honourable to a fault.  When she flees with Catelyn after the death of Renly, Brienne, pledges her loyalty to Catelyn Stark. In this I see the unification of two very strong women. Of all of the female characters in A Clash of Kings, I am most curious to see how Brienne grows and changes.

For all of the diverse and interesting characters in A Clash of Kings, I would be remiss if I didn't mention the great degree of violence, including rape that women are subjected to. Though most women of "gentle breeding," find a way to negotiate this man's world, though without the power of a strong family are far too often victims.  The economy of the seven kingdoms should be agriculture based in the time period in which A Clash of Kings occurs; however, the only industry that seems to exist is prostitution.  This seems just another vehicle to advance the bruitalization of women.  It's quite telling that there is a lot of sex in the A Clash of Kings and it is uniformly written from a straight male perspective and entirely focused on the man's sexual gratification.

In terms of GLBT representation we have King Renly and Loras Tyrell.  In the series A Game of Thrones, the relationship between these two men was extremely explicit whereas; in A Clash of Kings it was heavily implied with neither man confirming their romantic relationship. I know that Renly died because he challenged Stannis for the throne; however, this still means that one of the two GLBT characters ended up dead.  The two things may seen unconnected at first, but the fact of the matter is that because of the pitifully low representation, one death still amounts to 50% of the GLBT cast and this is a problem because far too often in this genre, GLBT characters are either turned into GBFF's, killed off, or erased altogether.

My absolute favorite character in this story is Tyrion Lannister. His disability is much more sever in the novel than it is in the television series.  Tyrion survives by his intelligence and constantly has to outwit the court.  He continually puts on a brave face but he suffers great pain from the disableism he faces.  More than anything, Tyrion just wants to be loved and seen as an equal.  The times that he does break down or we are witness to his moments of vulnerability are extremely touching and reveal just heavy the toll is of living with a disability even if one is a Lannister. In the end despite everything he has done to protect Kings Landing, he is still supplanted by his father like refuse.

In terms of race we still have the Dothraki who travel with Daenerys. Individually, they have no really been developed and seem to exist solely to serve Daenerys.  I don't understand why they continue to follow her, especially because this is counter to their beliefs and seems to exist solely to make Daenerys a special snowflake. If there are other characters who should be presumed to be of colour I cannot say that Martin made it very clear.  There is no reason that this series could not be more racially diverse than it is.  For you purist who insist on claiming that the setting of Middle Ages makes it impossible, let me remind you that the real middle ages, didn't have boys who could turn into wolves, or dragons.  The only real limitation to inclusion, is solely in Martin's imagination.

I know that this was a longer review than normal but please bear in mind that A Clash of Kings is over eight hundred pages long. As I said at the beginning of this review, A Clash of Kings is absolutely epic and it is extremely easy to get drawn into Martin's creation.  There is an extremely large list of characters but the shifting POV allows the reader to identify and invest in the main the characters separately. From a social justice perspective, A Clash Kings certainly has social justice issues but I still found myself enjoying the story. In terms of science fiction, this continues to be one of my favorite series.