The 100, Season One, Episode Ten: I Am Become Death 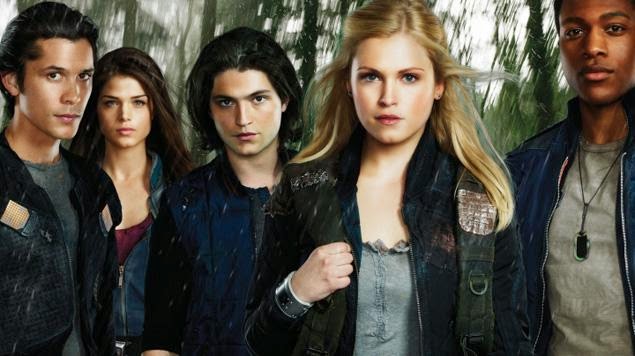 Clarke survey's the wreckage of the Exodus and it is littered with burned bodies.  The 100 bicker about the Grounders.  Later, they gather around and Jasper tells the story of what happened when he shot the Grounders and he is reveling in the attention. Octavia is not in the least bit impressed.  The gathering is broken up when the trip wire around the camp is triggered and the 100 discover a very beaten up Murphy. Murphy is quickly surrounded and he says that he was being chased by the Grounders.  Bellamy wants to kill Murphy on sight but Clarke and Finn want to use Murphy for information. Clarke says that as soon as they find out what Murphy knows, they will force him to leave and if Murphy refuses, then they kill him.

Jasper is now such a folk hero that he has women coming on to him but he rejects them. Jasper believes that Monty is jealous because now people think he is cool. Jasper even suggests that Monty should find somewhere else to sleep.  Ooops, trouble in nerd land.

Raven is trying to get in contact with the Arc and says that she has a bad feeling. Suddenly, Clarke's eyes start to trail blood.  All around camp, people are getting sick and coughing up blood.  In his tent, Murphy is coughing up blood and Clarke demands to know how Murphy escaped.  Clarke realizes that Murphy was released because he carried a virus. Yep, they turned Murphy into a typhoid Mary.  Bellamy believes that Murphy knew about this. Clarke quickly organizes a quarantine.  Conner reveals that the first one to find Murphy was Octavia, so Bellamy rushes to his sister's tent to find out if she touched Murphy. Clarke declares Octavia clean for now but says that she needs to stay there just in case. When Bellamy leaves, Clarke asks Octavia to sneak out.

Octavia heads to the love den she shares with Lincoln and he quickly examines her.  Octavia makes it clear that people are dying and asks for the cure.  Lincoln says that there is no cure and Octavia gets upset that Lincoln was going to let people die.  Lincoln then reveals that his people are going to attack at first light and that his people think that he is a traitor now.  Lincoln adds that he is leaving and asks Octavia to come with him to join a new clan..  Octavia says that she won't let her brother get killed but adds that she will meet with him at dawn.

At camp, Bellamy calls out for Octavia and Clarke is forced to admit that she sent Octavia to see Lincoln about a cure.  Bellamy threatens that if anything happens to Octavia that he will have a problem with Clarke. Chaos begins to reign in camp, with the healthy now pointing weapons at the sick.  Clarke fires a weapon in the air saying that this is what the Grounders want. Clarke collapses and Finn picks her up.  Octavia rushes into camp saying that there is no cure but the Grounders don't use the sickness to kill.  Octavia announces  that the Grounders are attacking at first light.  Of course, a pained Raven looks on as Finn carries Clarke back to the drop ship.  Octavia says that if Finn is not sick by now, he is probably immune.  Murphy is back on his feet and Clarke tells Finn that he needs to save himself and take anyone healthy enough with him.

The 100 are busy loading weapons and bickering.  Finn suggests building a bomb to blow up a bridge because it will delay the Grounders.  Raven heads to the Exodus and starts collecting fuel. Raven assembles the bomb and Bellamy is concerned that this involves the last of the gun powder. Finn volunteers to blow up the bomb and this shocks Bellamy.  Suddenly, Bellamy starts to bleed from his nose.  Bellamy stumbles out into camp and tells Jasper that he wants him to take the shot and warns that if Jasper misses, they are all dead. Bellamy then collapses to the ground and warns Jasper to stay away.

Murphy is brought into the drop ship vomiting blood and Murphy is busy playing nursemaid now that he is feeling better.  Octavia promises that she won't let anything happen to Bellamy, when he says that he is scared.

Finn heads to get the bomb and finds that it's gone.  They decide to go after it and Jasper asks Monty to come but Monty tells him to ask his new friends.  Raven is making her way to the bridge with the bomb and she starts to bleed from the nose.

At camp, Murphy tries to help Bellamy but Bellamy wants to know part of it.  Bellamy promises Murphy that when he gets better, if Murphy is still here, there is going to be a problem.  Clarke is back up on her feet, so she starts to take care of Bellamy. They discuss whether or not to trust Murphy and Clarke says that she believes in second chances.  Bellamy expresses doubt as to whether Finn and Jasper are going to be able to blow up the bridge.


Raven has made it to the bridge but she is dizzy and stumbling.  Finn and Jasper are running and pause when they hear war drums.  On the bridge, Raven prepares the bomb.  Raven has assembled the bomb but she is weak and is attempting to crawl off the bridge.  Finn orders Jasper to line up the shot and rushes forward to grab Raven.  The Grounders are making their way to the bridge and Finn gives the order for Jasper to shoot but he misses.  Monty comes out of the woods and hands Jasper another gun telling him that he can do this. With his second shot, Jasper blows up the bridge.

At the love den, Lincoln is packing up his things saying that the Mountain Men will kill them all.  Octavia tells him that she is not going with him.  A stunned Lincoln pulls out his journal and hands it to Octavia. Lincoln tells Octavia that she will die here but Octavia says that the 100 are her people.  With a tear rolling down her face, Octavia kisses Lincoln.

Back at camp, Jasper, Monty, Raven and Finn return to a heroes welcome.  Raven is in rough shape and she is being carried by Finn.  Raven is put to bed in the drop ship and Clarke declares that she is getting better. Raven says that Finn hesitated when Bellamy asked who was going to take the bomb and points out that he didn't hesitate when Clarke was falling.  Finn tells Raven that he loves her but Raven says that it's not the way she wants to be loved, or the way that Finn loves Clarke.

Bellamy and Clarke stand over the fresh graves and decide they need to talk about Murphy.. They lost 14 people and so are considering pardoning Murphy.   In the drop ship, Murphy takes his revenge by killing Carl.

After how amazing the last episode was, this one feels like a bit of a let down.  I don't know why The 100 won't commit to the drama it clearly wants to be. The Grounders have sent a typhoid Mary into camp and yet somehow, The 100 find time to have relationship angst. You would think that because this is a life and death matter that the angst could be put on hold for just one damn episode.

There were however a lot of mature themes running through this episode.  The 100 were in an impossible situation.  The Grounder were going to attack and they were vulnerable and so had to act in their own defense but said defense also meant acting in a way that mirrored their ancestors and lead to the destruction of the earth.  The questions is what is the cost of survival and do the ends justify the means. Now that they have built a bomb, as well as used guns what will be the next step?  Can weapons really mean deterrence or do they just come down to an escalation of events.  We can always justify and make explanations for just about every situation.

After everything they have seen, how could they possibly consider pardoning Murphy.  He may not have known that he carried plague but he has proven time and time again to be a violent dangerous man. I get that they are trying to be different from the Arc but where does common sense come in?