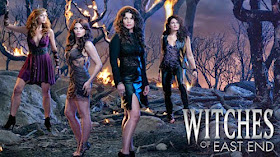 Last episode Joanna decided to solve all her problems by time travelling to the distant past and Ingrid decided that she’d rather get to know her evil grandfather than support her mother.

This is not a family known for its common sense. They’re lucky Dash and Killian are around, they tend to make the Beauchamps seem sensible – Killian has decided to track down the family of the woman who was magically enslaving and raping him.

So Joanna, Freya and Wendy are in Baltimore in 1848 wearing very out of place clothing. They’re there to pick up a powerful weapon to kill the king with – one that Joanna once used to kill Freya. Well that was tactful. Freya is, astonishingly, not thrilled by this news.

They go to a brothel/opium den the Beauchamps owned at the time so they can get clothes and clumsily dodge past versions of themselves (Joanna apparently an opium addict because she’s mooning after Victor. Which is kind of hilarious because Victor died in the present and Joanna completely forgot about him two episodes afterwards).

Anyway, they have 12 hours to leave or ill-defined bad things will happen because time travel is bad. We also get another story of Freya’s past life and why Joanna has to kill her – involving Killian trying on a new wardrobe and different accent. That past life is as Edgar Allen Poe. Past Freya predicted his future which is “we shall have sex” – I must be psychic because I predicted exactly the same thing!

Past Freya broke the sacred code and told Killian/Edgar that she was a witch which was inspiration for him but also naughty/bad/wrong. Also, since Edgillian got writers block Freya decided to open a door to the great beyond for inspiration (did I mention the bad decisions these people make?) which gets her possessed by a serial killer. When Wendy tries to deal with it, Freya kills her (a temporary issue with Freya). Ingrid turned to Joanna who was too stoned to be helpful so he calls a friend who has a box called an Anima; when someone possessed looks in the spirit is ripped out (hence why it’s useful against evil granddaddy). But the host also dies, alas. Something Ingrid accepts even knowing it will kill her because she knows she will be reborn – but she also needs Joanna to pull herself together since she wants her to be present and capable when raising them

That’s the first time someone finally recognised that death for the daughters was a temporary inconvenience. A shame Victor didn’t remember that when sacrificing himself for Freya.

So they used the box, killed Freya then future Joanna claimed the box (which past Joanna remembers).

In the present Ingrid and evil granddaddy bond over tea and him revealing he’ll probably die soon (Ingrid has completely forgotten her mother’s warnings – or the fact the very reason her family is on Earth is because of him, or the curse etc etc. She’s amazingly good at forgetting things)

Just in case, like Ingrid, you’ve forgotten evil king Nicklaus is evil, he intends to prepare a spell to work against whatever Joanna plans. He uses Tommy’s appearance (the body he’s possessing) to pick up a woman at a bar then rip out her heart. Though casting it does seem to weaken him.

Ingrid decides she wants to go back to Asgard with her evil granddad. Thankfully in a shocking moment of actual sense, Ingrid goes to Dash for help because she KNOWS her granddad is evil! Oh thank you thank you thank you Ingrid for being the sensible one!

Learning that the body has come to light, Dash goes to the morgue and rips out its teeth. Which I’m sure someone will notice happened after it arrived in the morgue and will cause CCTV to be checked, but see my previous point on the common sense level of these families.

More awkward, Raven has absolutely no problem questioning Dash about murders by day and popping round for no-strings-attached sex by night. She also takes the opportunity to snoop round his house.

Over to Killian with his evil ex’s family (including granddaughter that looks just like her) talking about Killian’s repeatedly cursed love life which I assume means with Freya since they’ve been trying to make it work for generations and it always ends badly. They can fix that for the next life but it’s expensive and difficult. Killian doesn’t even pause to think, sign him up and they give him the potion that will remove the curse – and kill him in the process.

He drinks it, not answering the phone from his brother telling him that Freya isn’t actually dead. Freya, your line is:  O happy dagger, This is thy sheath. There rust and let me die.

I have snarked this episode but there’s a sad lack of reasonable decision making in this series.

The whole Dash & Killian star-crossed love thing; why has no-one connected it to Freya’s curse to die young? Let’s face it, there’s a reason why most love stories end “Happily Ever After”. Everything about Freya ends tragically because of that curse.

All Dash knows about Eva’s people is that Eva used magic to enslave and rape him repeatedly – her family knows about this and doesn’t seem especially condemnatory of her. Yet he trusts these people?

We got more of Freya’s past life stories and I’m sure we’re all shocked and amazed that it involved a romance! What an amazing surprise! Why, one would almost thing that without a love interest, Freya actually has no reason to exist!

We had a whole lot of plot line to resolve with the whole battle with evil king Nicklaus – and we needed some movement especially after last episode and the episode before had a whole lot of events that were then invalidated by everyone coming back to life again – and instead we have another flashback into another of Freya’s past romances with Killian. Less waffling! More action!