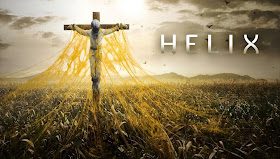 All this science stuff isn’t getting us to the answers fast enough for the writers so we see one of the fruit pickers, Travis, at the Commune/Cult/Monstery be stung by a bee. That night he is sick with the nasty fungal growths

The next morning a woman comes looking for him. By what they both say we can guess that they are a couple – but that she’s slept with another man to get pregnant probably at the urging of the Cult (making it ever more cultish and creepy). Travis is full of the aggressive fungal-zombie disease and attacks and kills her, raging in his jealousy

Peter exchanges text messages with someone – saying he thinks he should abort his mission but being told to find out what Alan is up to. Peter is up to something nefarious.

He finds Alan – who was knocked out last episode – unconscious and wakes him up. Peter grudgingly offers medical attention (by helping him stand before checking for head and neck injuries). He takes him back to their lab where Alan snarks over the antiquated equipment. Alan won’t answer any questions about what happened, to Peter’s annoyance. Peter’s also pretty annoyed that Alan hasn’t been in touch for 8 months. Alan wants them to leave. Peter refuses to. Well that was predictable.

At the compound Michael tries to apologise to Kyle for the kids attacking him and he tries to say the disease caused the behaviour change. Kyle doesn’t buy it; the kids were clearly free of disease – he accuses Michael of brainwashing. Michael and Sarah also have an odd moment where Michael wonders if he’d seen her before

Added creepiness – Michael refers to the kids as “my children” before passing it off as general cult children; but it suggests that he may be the father of all the compound’s kids.

Sarah and Kyle have a science moment reminding us that the disease is fungal and not inhaled and probably in the food – but they’ve not found a source yet which isn’t helped by the general unhelpfulness of the islanders. Sarah focuses on Soren whose immunity is the key – though they still don’t know where he is. With added notes about how unco-operative everyone is.

Travis’s body is found, much to everyone’s horror, dead from the disease. Sarah takes the opportunity from the crowd to speak to Olivia, Soren’s mother – but she refuses to help, spouting Michael’s homilies

Michael addresses his congregation – having to shout to make everyone be quiet (looks like Michael’s serenity is cracking). He hears all the rumours and panic and basically tells everyone to keep calm and carry on. But he also adds they should help the CDC doctors and let them help –because they are there to help them (despite Olivia’s objection). He finishes telling everyone to continue to be their true selves, which seems to be the mantra of the cult (and everyone’s true selves seems to be nicely conformist cult members. Uh-huh).

Michael meets with his three lieutenants and he is angry and distraught (pointing more to the dead woman, Misha, being pregnant with his child). He repeats Kyle’s suspicion about the children but Annie puts it aside and focuses on the harvest and all being good. He seems to get his mojo back, talking about feeling safe, how uncertainty is bad all the while creepily stoking the faces of his three female lieutenants, Agne, Anne and Amy. He refers to them as his “three best girls” and expects them to handle any “uncertainty.”

The three meet later with Anne lecturing Amy about acting on her own and Amy snapping back that Anne is out of control. Agnes doesn’t debate, just slaps Amy and tells her she knows what she’s up to before trying to appeal for unity in the name of “mother”. Whoever that is.

Kyle and Sarah perform the autopsy on Travis – with Sarah also being super suspicious that Olivia gave up on Soren so quickly. Inspecting the body, they find the bee sting.

They return to where Peter is treating Alan, introduce Alan and Kyle and Sarah tells Alan about Soren  - someone who got better, alone of the 30 victims. Alan and Peter throw out orders about, basically, finding out if the infected have been sneaking in unauthorised food (why is no-one mentioning the insect sting), leaving Peter and Alan to argue about Julia and Ilaria. Alan was shocked to find Julia to be leading Ilaria (he went to Paris to rescue her) and he thinks the plague here, dubbed Mycosis is a creation of the immortals just like Narvik. He calls immortals the real plague. Peter asks if Alan’s going to kill them all then, including Julia and Sarah but Alan refuses to explain, which Peter considers typical of his arrogance (so do I, but I think Peter isn’t that different). Alan decides the easiest way to avoid addressing accusations of arrogance and genocide is to accuse Peter of attacking him, hence why Peter found him. Yes, it’s a stretch, but how dare anyone question Alan? Peter storms off on a huff, so Alan has achieved his goal.

Peter runs off to make a call to his nefarious, French contact saying that Alan suspects something and Alan follows to listen in. His contact is Sergio! Who is now working for Ilaria!

Sarah and Kyle look for sources of the plague – Sarah taking Soren’s teddy bear and Kyle taking what could be very very yellow honey from some of the swarming bees. At the lab, Kyle confirms that the honey is the carrier – but not the bee stings (and Peter gives him a mini-lecture about being so careless around them).

Sarah tries to convince Olivia her son is out there – and Olivia stabs her in the stomach. She collapses, gasping about her baby.

Julia tries to get through to Hiroshi that he’s hallucinating and his family is dead. He doesn’t listen but does keep her tied to the chair and drugged. She tries to crack his delusions and even appeal for help with her disease – for which he mentions “a therapy” but that doesn’t seem to involve curing the illness. The therapy involves helping her “join the family” which involves his ominous murder basement (possibly with preservatives – but there’s a limit).

With them gone it’s time for inappropriate music, Helix-style, an escape attempts which fails. Having delayed everything Hiroshi comes back and Julia, again, tries to convince him everyone is dead. He starts to inject the weird white liquid he has into her but stops and hums when she starts crying. I honestly find it even more disturbing than the injecting mystery liquids. She convinces him to let her hug him – and she injects him with knock out drugs. She escapes, taking the axe with her. Hiroshi follows… with a katana. Yes, a Katana. Just because he’s stopped playing the sinister scientist doesn’t mean Helix is going to abandon every East-Asian stereotype.

They fight, axe vs katana; Hiroshi is better (albeit, part of that is from an improbably sharp katana cutting through the haft of an axe) but he is distracted by a hallucination of Jaye and Julia uries the axe in his stomach. Staggering back and wounded, possibly dying, he begs Julia to take his katana, his legacy. He apologises for making her like him and she leaves, with the sword.

He staggers home to his hut to be with his hallucination family/corpses where he seems to die.

I wish that Daniel had kept the name Miksa. Yes, he’s a hallucination and Hiroshi would remember him by the name he’s always used, but one of the big moments in Daniel’s story last season was him reclaiming his Native family and his old name, Miksa, rather than the name Hiroshi gave him. It’s a shame to have it so erased along with the first season.

And what is happening in this storyline. Did we really bring Hiroshi back just so he could be creepy and then justify giving Julia a Katana? (Which appears to be the meaning of “densho” – to pass on the future generations) Did Hiroshi just appear to give her blade an origin story? Is that why the few POC left in this show made a recurrence? Is that it? What a complete waste and an utter mess – to say nothing of the classic “mentally ill person is dangerous and scary” trope.

It doesn't give me great hope about Sergio's return

As for the rest – they’ve found what is causing the disease and we have some more mystery added with Peter. But I can’t say I like any of the other characters, there’s a lot of posturing going on. But things are moving, c’mon Helix, intrigue me!